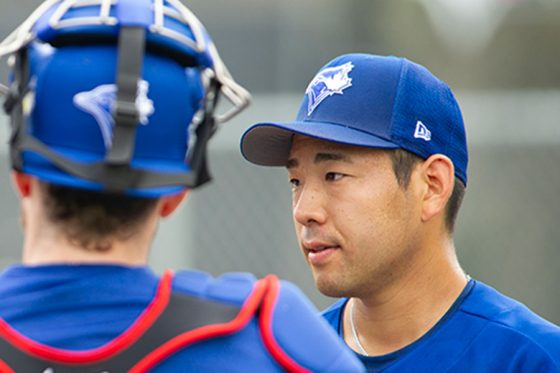 The Blue Jays are “Anyway, a wonderful team, a team aiming to be the best in the world”

Blue Jays pitcher Yusei Kikuchi held a press conference at the baseball team facility in Dan Eden, Florida on the 15th (Japan time 16th). He joined the group on the 14th (15th) the day before for 3 years at 36 million dollars (about 4,255 million yen). Regarding the reason for choosing the Blue Jays as a new world, “I had the impression that it was a wonderful team, a team aiming to be the best in the world. I feel that the city is wonderful, and the atmosphere of the team is also a bright team. I felt it. It didn’t take long to make the decision. “

The negotiations sent a video message introducing the Blue Jays and the city of Toronto, home of the Blue Jays. Teammates and staff appeared one after another in the video of about 8 minutes. “That was a big thing for me. Anyway, he introduced me to the wonderfulness of the city and the environment. The rest was the comments of the staff, and above all, the regular teammates and superstars were in this team. I was proud of it. That was impressive. “

It was locked out from the beginning of December last year, and transfer negotiations were not possible. Still, after the transfer market was lifted, he soon decided on a new world. “I think it took about 24 hours to decide in a day or so. I knew the greatness of this team and the city, so it didn’t take long to decide.” ..

It is said that he pitched a bullpen on that day. “I don’t have more time than usual until the opening. If I have time to eat other than baseball, I think it will be a chance to get to know each other,” he said.

Last season, he pitched 29 games, 7 wins and 9 losses, and an earned run average of 4.41. He was also elected for the first time in the All-Star Game. “First of all, I think that straight is the best feature. I think how much you can attack the strike zone will be the key throughout the year. There are three other types of balls, so how good is the count? I think the theme will be to make a sword, “he said.