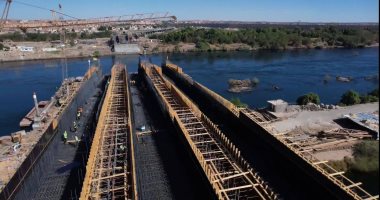 Aswan is preparing to open the axis of the reservoir replacement, which is a new lifeline for urbanization and development on the land of the capital of the African economy. About the new hub, get to know it:

1- The axis of the replacement of the Aswan Reservoir is a major cultural and developmental shift on the land of the city of Aswan.

2- The project aims to reduce traffic pressure on the Aswan Dam.

3- The Ministry of Transport is implementing the Aswan Reservoir replacement axis project.

5- It includes three traffic lanes for each direction, and the axis includes 2 bridges and one tunnel.

6- Its total cost reached about one billion and 700 thousand pounds.

8- The axis is considered an alternative to the movement of cars on the body of the first Aswan Dam, which was inaugurated in 1902.

11- It contributes to linking the east and west of the Nile and facilitating traffic.

12- It also helps to facilitate the movement of international trade between Egypt and African countries.

13- The axis will extend westward to connect with the Aswan train station for the electric express, while raising the efficiency of the road linking the east of the axis and connecting the Aswan-Branis Road.

15- The axis crosses the Nile River and the western agricultural road “Cairo – Aswan” and the link is on the Aswan / Abu Simbel road.

32 points and the win