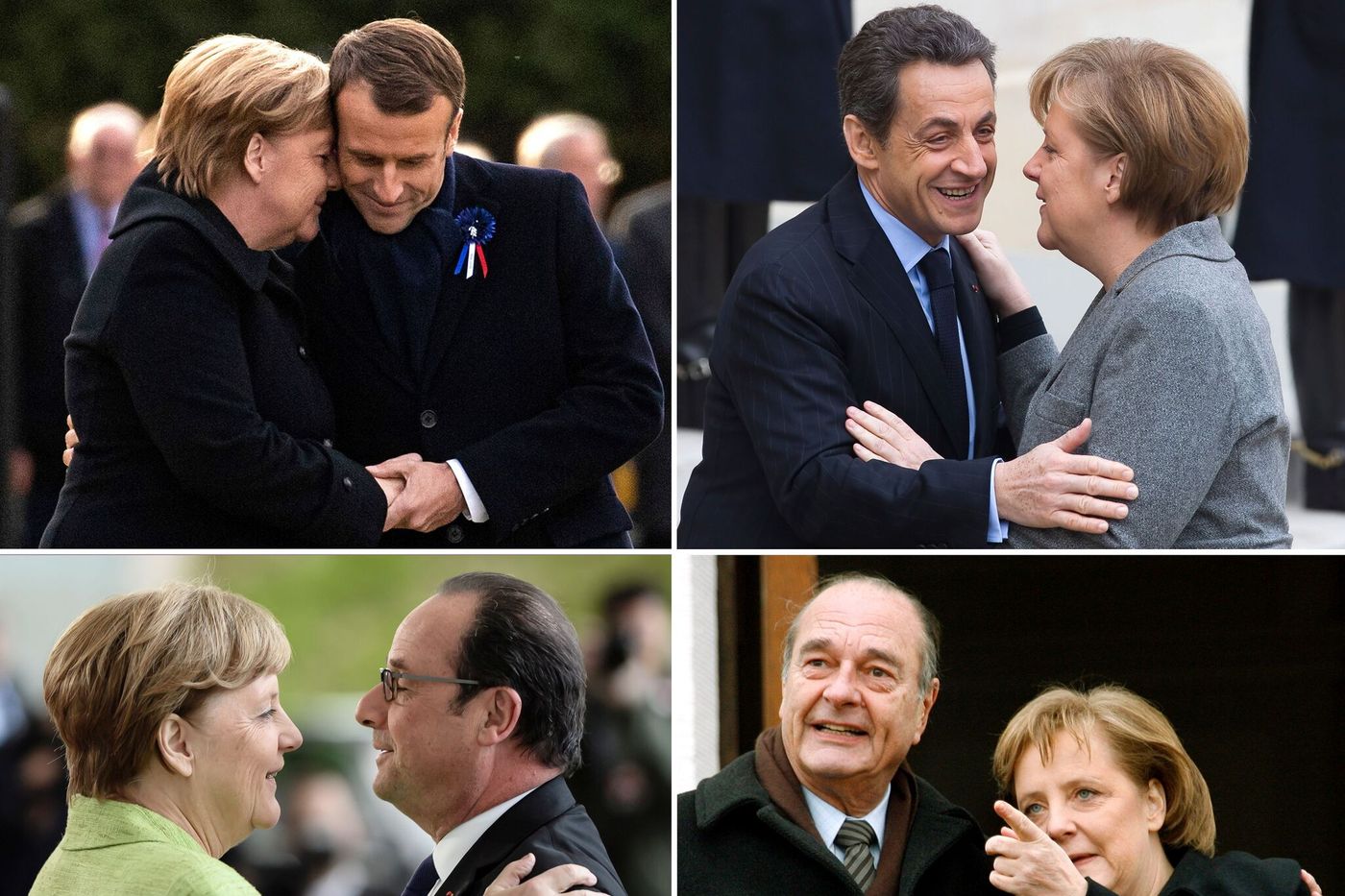 They shared the same European political family, the European People’s Party (EPP). But not the same references. Jacques Chirac is modeled on the image of De Gaulle and Adenauer who together attended a mass in July 1962 in the cathedral of Reims. He inherits from the General a certain transatlantic mistrust.

When Angela Merkel came to power in 2005, this symbolism was largely foreign to her, as a political leader socialized in the East. For her, the European idea takes shape in the fall of the wall and reunification.

The relationship starts off badly. The two leaders do not agree on a name to take the head of the European Commission. Angela Merkel refuses the Belgian Guy Verhofstadt, who was the joint candidate of Chirac and the previous Chancellor, his political enemy Gerhard Schröder. The president and the chancellor end up agreeing on José Manuel Barroso, however considered too Atlanticist by Paris.

Another disappointment: the « non » of France (and the Netherlands) to the draft European Constitution, during the referendum of 2005. During the German presidency of the European Union in 2007, Angela Merkel will put all her energy into saving its substance in what will be the Treaty of Lisbon. During Chirac’s last trip to Berlin, this will not prevent the Chancellor from proclaiming in French: “Long live Franco-German friendship! “

Angela Merkel and Nicolas Sarkozy, or the meeting between prudence and haste. «She thinks, I act ”, later reproached the French President to the Chancellor. Barely elected, Nicolas Sarkozy takes off for Berlin, following tradition, but he warns: “I didn’t just want to make a symbolic gesture. I wanted to express my wish that we get to work straight away. “

→ REPORT. With the departure of Angela Merkel, the Germans fear the end of a golden age

France took the rotating presidency of the EU in 2008, in the midst of the financial crisis, and Nicolas Sarkozy wanted to soften Berlin’s intransigent positions vis-à-vis the most heavily indebted countries. The two leaders end up taming to avoid the bankruptcy of the euro. They impose the Stability Pact on all Europeans, and we talk about them, about the alliance « Merkozy ».

They had everything to get along wonderfully. François Hollande, the socialist of the “Synthesis”, and Angela Merkel, the goldsmith of the compromise, could have come to an agreement, if their bond had not been sealed from the start, when the French president was elected on a strong promise: to put an end to the policies austerity in Europe, by renegotiating the European fiscal pact designed to curb excess deficit and debt.

Angela Merkel, throughout the French presidential campaign, refused to receive him in Berlin, showing unfailing support for Nicolas Sarkozy. Once in power, François Hollande will have to give up his project, which leads to a cooling of the relationship for two years.

The Franco-German couple had to wait for the Russian invasion in Crimea in March 2014 to break the ice. François Hollande and Angela Merkel organize a four-party meeting in Normandy with the Russian and Ukrainian presidents in June, and initiate a peace diplomacy giving birth to the Minsk agreements in 2015, which aim to prevent an escalation of the armed conflict in the United States. doors of the EU.

→ ANALYSIS. In Brussels, will Europe make a federal leap?

In the end, it is with François Hollande that Angela Merkel will hold « son » symbolic image, comparable to the 1984 photograph of Helmut Kohl and François Mitterrand, hand in hand in silence in front of the Douaumont ossuary in memory of the soldiers of the Battle of Verdun. France has just suffered, in January 2015, the terrorist attack of « Charlie Hebdo ». Four days later, the Chancellor is at the side of the French President on the steps of the Élysée. She leans her head delicately on Francois Hollande’s shoulder, and closes her eyes as a sign of meditation. The moment is immortalized.

The relationship between Angela Merkel and Emmanuel Macron has been welded into rough but frank ties. “There’s no point in pretending. A facade relationship is a bad relationship, we remember at the Élysée. So we always had a relationship that got to the bottom of things, saying the differences on important points and looking for agreements to overcome these differences. ” The current goes well, but the style “Jupiterian” is not always to the Chancellor’s taste.

The fiery speech of the French president delivered in 2017 at the Sorbonne on his vision of Europe contrasts sharply with the chancellor’s reserve, who only timidly responds to Emmanuel Macron’s ideas, in particular that of creating a budget for the euro zone .

To relaunch the Franco-German relationship, Paris and Berlin signed the Treaty of Aix-la-Chapelle in January 2019, which renews the Elysée Treaty of 1963, followed in the same year by the creation of the Franco-German Office. of youth (Ofaj). The text adapts to a double revolution: Brexit, which forges a European destiny without the United Kingdom, and the transatlantic crisis of the Trump era. New forms of cooperation, particularly military ones, may emerge.

→ ANALYSIS. Angela Merkel in Paris for her farewell tour

The coronavirus crisis confirms the rapprochement. In May 2020, Emmanuel Macron and Angela Merkel formalize their « Franco-German initiative for European recovery ”, ultimately with 750 billion euros for the benefit of the most affected EU countries, including 390 billion in debts shared at European level. Unheard of, which prompted some to qualify this episode as “Hamiltonian moment”, in reference to the birth of the Federation of the United States of America in 1790.