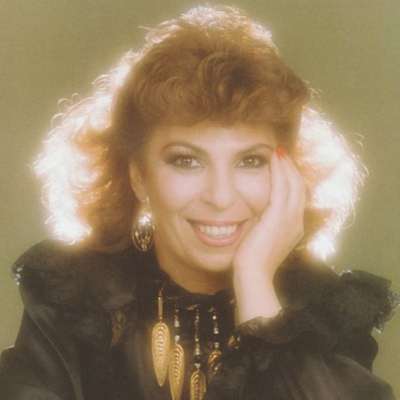 The godmother of the monologue in Lebanon and the messenger of joy and smiles in times of war. The artist of joy and the hallmark of Lebanese comedy. The Lebanese screen has not known since its inception until today, a talented artist by nature, her size in acting, singing and imitation. The TV bird and the theater butterfly, which these days mark the 34th anniversary of her physical absence, and the rest of her resonant laughter adorned with absolute spontaneity that a golden star has dedicated to successive generations of those who lived through her and those who later met her through YouTube clips or replays of her work on the screen.

She toured the world’s theaters with her voice and laughter, and she sang in many countries from Britain to Italy, the Emirates, Egypt and others. She was the star of smiles and happiness wherever she went, in her private life as well as her career. The laughter did not leave her, she was tireless and did not get tired of simply facing her problems. What she loved most about herself was her love for life despite its difficulties, her initiation and vitality, and she believed that God was the one who gave her the energy and strength to help her in this life.

artistic family
Feryal Karim or Vera Semaan (April 13, 1938 – July 3, 1988) was born into an artistic family. Her father, Bishara Samaan, encouraged her to enter the artistic field after her two sisters, Isabel, who was known as “Laman” and Claire. Vera’s first talent appeared clearly in the tradition she was doing in front of the family at the age of five, and then she amazed everyone on one of the visits to Egypt with her ability to perform songs for singer Soraya Helmy, when she was not more than six years old, to be used by the Egyptian director Samir Lama in the movie “Sakkat Al Salama”. (1948). After that, Feryal’s actual artistic career began with her sister Claire, and they stood as singers on the stage of “Farouk Theater” in Beirut and were known as “The Blonde and the Brunette”. From the Farouk Theater, the actual breakthrough towards professionalism was the place where the Syrian actor Saad Al-Din Parsley presented sketches, and the singer Muhammad Karim the Tarab songs, and the theater would be the beginning of a love story that ended in marriage between Faryal and Muhammad Karim, and Claire and Saad Al-Din Parsley. And from “Farouk Theater” to television, where I met the great artist Muhammad Shamil, so he used her on “Ezz Street”, which was broadcast live on the air, and then “The Court Ruled”, in which one of its episodes witnessed a departure from Faryal from the role assigned to her in the courtroom, and turned a tear To a laugh, the Lebanese newspapers would announce the next day the birth of a comic phenomenon named Feryal Karim.

Emerald and Umm Khabar
A remarkable fame that Faryal gained with the series “Umm Khabar” (Sami Al-Sedawi’s text), which highlighted Faryal’s singing talent, to include in each of his episodes a “monologue” performed by Faryal with her own signature. As for the unparalleled success in Faryal’s career, it was with the role of “Zumrud” in the series “Al-Dunya Heik” (Mohamed Shamil’s text), which lasted for four consecutive years, and is almost the most restored series on “Lebanon TV”. What is remarkable is the large audience that he was receiving with each new show. Feryal also appeared on television, as well as with Abu Salim, in a series of episodes, including: “The Cute Thief”, “The Seven Doors”, “The Millionaire”, “Bosta”, “The Assembly Car”, “Forget Your Worries” and “Theater of Humor,” and with the Rahbani brothers in “Sa’a Wa Ghiya.” She also appeared in front of Elie Sanifer in “Aouk and Rafqato” by Milad Al-Hashem and Marwan Najjar. As for her latest works, it was “Ibrahim Effendi” by Marie-Thérèse Salhab and Ibrahim Maraachli. Feryal was a theater artist with distinction, and she stood with the late artist Hassan Aladdin / Shusho in a number of plays, including “Farqat Namira”, “Behind the Parafan”, “Dr. Shushu”, “Al-Haq Al-Attalian” and “Wow Waseen”. She also appeared with the singer Salwa Al-Qatrib in the Romeo Lahoud Theatre, and participated with Philemon Wehbe in a play by George Khater entitled “A Building but on Lent”, and with Elias Rahbani in the play “Wadi Shamsin” in front of Al-Shahroura Sabah.

theater and cinema
Feryal loved the theater and was devoted to it. At the height of the Lebanese civil war, she used to cancel many foreign performances to secure a great financial return for her as a gift to the theater’s eyes. She used to say: “Theatre is my first and last love. It is my home and my haven, and in it I release my energies.” Faryal recorded a cinematic presence in joint Lebanese-Egyptian films and Syrian films in the sixties and seventies, such as “The Dreams Hotel” (1968) and “Al-Tarid” (1968) in front of Farid Shawqi, and “Alam of Fame (Amwaj)” (1971) in front of Nadia El-Gendy, and “The Madness of Teenage Women” (1972) with Nabila Obeid and “Misk and Amber” (1973) with Duraid Lahham. Although she represented the Egyptian dialect in a number of her films, she considered that the absolute priority was to represent her in the Lebanese dialect. This led to her being deprived of many of the series that were produced by “Lebanon TV,” which adhered to the classical Arabic in many of its series, due to the marketing conditions for Arab countries. However, Feryal did not regret, saying: “The classical language robs the actor of some of his sincerity in the role play, and for me, I play comedic roles, and comedy cannot be presented in classical, so does anyone imagine that Fouad Al-Mohandes or Adel Imam will present their roles in classical, and I am like them, The vernacular language is more responsive to people and more in contact with them and their daily lives.”

للو وعنتر
Singing was her playground in which she excelled, and her songs are still present in our diaries. She collaborated with major composers, such as “I want to love men,” which she sang at the “Barouk Cedar Tourist Festivals” in 1972. It was written by Antoine Traboulsi and composed by Naim Humaidan, and “The Green Market” and “My Home and Television” (composed by George Yazbek), then her songs. Which gained wide fame with Elias Rahbani, such as: “Barrat Al-Bait, Amelie Antar”, “O Asmar, O Kahil Al-Ain”, “Khadly Eddy” and “Our Neighbor Al-Shawish”. A prominent collaboration for Faryal was with the musician Melhem Barakat, who saw in her a great artistic ability, and considered that she was the only artist who did not receive a wage from her for the tunes he gifted to her, most notably: “Uncle Bazaalni Lulu”, “Qarqork Ya Badia” and “Dir Balak for your meat”. And “other than your love, I don’t want.”

The sad moment
Feryal Karim suffered from rheumatism, which struck her heart when she was six years old. Despite the pain and pain, she took it upon herself to bring happiness to the hearts, and she did not complain or let her health affect her path. From her pain, she created a legend of joy that enshrined her as a role model in coping with illness. She lived for the theatre, and she died for it. On July 3, 1988, during a concert in Al-Moamalatin, Faryal fell on the stage singing “Our Neighbor Al Shawish.” A dramatic and painful moment when her heart full of pain betrayed her and could no longer spread joy. It was the historical moment that was recorded by the camera of one of those in the place. On the incident, the journalist, Zaven Kyumjian, presented a report on his program on the “Future” screen in 2016 about the person on whom Faryal leaned at the moment of her death on the stage. A young man was celebrating his wedding night and his brother was filming the event with his camera. The bride narrates Feryal’s last moments, saying: “She approached me and asked me what do you want me to sing to you.” The bride replied, “I’m still upset.” Feryal replied, “No, no, you are a bride after too early to make you upset.” Today, after 34 years of departure, some news spread about serious attempts to turn Faryal Karim’s biography into a television series, especially after the absence of official honors for an artist of her size, who deserves an award in her name presented annually to the best comedian or book chronicling her life or many honors for a star extracted from The scourge of war brings a smile to the lips of the Lebanese.

From you to God the guilt of your father and your mother is in your neck.” .. A severe attack on Donia Samir Ghanem, and the reason is shocking!