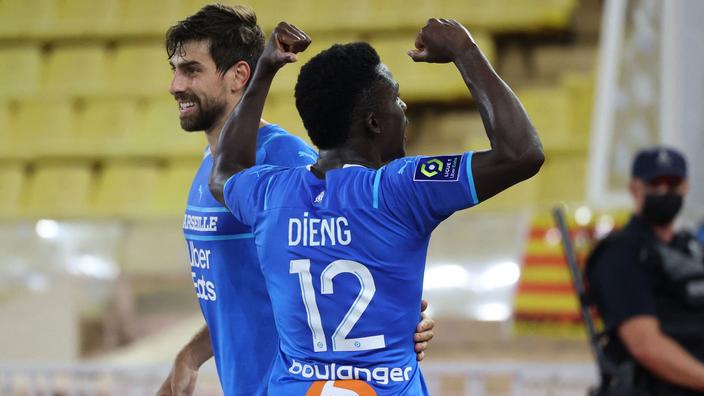 His training at the Diambars Institute, his first goal in Marseille or his favorite club, discover five things to know about Bamba Dieng, the Olympique de Marseille striker who plays this Thursday against Lokomotiv Moscow.

Author of a resounding double in Monaco last Saturday, Bamba Dieng brilliantly illustrated. Man of the match, the young Senegalese striker scored points with assiduous observers of the Marseille club. Before the trip to Lokomotiv Moscow, discover Bamba Dieng, one of the revelations of Olympique de Marseille.

Trained at the Diambars Institute in Senegal

A native of Pikine, in the Dakar region, Bamba Dieng started football at ASC Sonacos. In 2014, he joined the Diambars institute to complete his training. He studied at this prestigious training center for 5 years. A renowned football institute in Senegal. “It is the best training center we have ever had here in Senegal. He trains us and makes us better. I can say that it is thanks to the academy that I am here today.»

FC Diambars was founded by Patrick Vieira, Bernard Lama and Jean-Marc Adjovi-Boco in 2000. The objective set by the trio is to convey and transmit moral and sporting values ​​to the new generation. The training center has a professional team and a sports-studies section to train young players.

Top scorer in the Senegalese first division at 19

The Bamba Dieng revelation is making a name for itself during the 2019-2020 season. Just promoted to the first division with FC Diambars, the Senegalese striker left his mark on the championship by scoring 12 goals in 12 games. He breaks the record set by Amadou Dia Ndiaye, who is currently playing at Le Mans FC. Top scorer in the league, he was nicknamed “Bamba Goal».

The Covid-19 crisis interrupts the championship during the season. However, Bamba Dieng stirs up greed. Among its clubs is OM. A special club for the striker. “I would also like to evolve in France in Marseille. They have nice supporters, the Marseillais. ” A few months later, the leaders of Marseille reached an agreement with the Diambars institute, and Bamba Dieng joined OM in the form of a loan with an option to buy. The beginning of the adventure.

Launched into the deep end by Nasser Larguet

When he started out in Marseille, Bamba Dieng had to prove himself with the reserve team. The director of the training center, Nasser Larguet was quickly won over by the qualities of the Senegalese. After the departure of André Villas-Boas, Nasser Larguet takes over the professional team. An important date for the development of Dieng. For the trip to Auxerre, in the Coupe de France, Larguet calls on many young people, including Bamba Dieng. A first that he will not miss. Entered in the 81 ‘, the former goleador of the Diambard Institute is quickly highlighted by scoring his very first goal at the Olympique de Marseille. Well launched by Pol Lirola, Dieng gets the best of his opponent and does not hesitate to shake the nets.

A feat that allows him to gain playing time against Bordeaux, before obtaining a tenure against Nice.
A baptism of fire succeeds, which delighted his trainer at the time: “He’s a boy who put in a lot of effort, who worked a lot. We installed it at the start with the N2 (…) I found that during the last training session yesterday, it was really efficient on the reduced clearances that we made. He scored goals, was very present in the 16.50m, which we lack. I felt it was time. ”

Sympathizing with OM and FC Barcelona during his young years in Senegal, Ahmadou Dieng had his sights set on Liverpool: “Liverpool are my favorite club but Sadio Mané has increased my desire to play thereHe revealed in an interview with Wiw Sport. A dream, an ambition to play at Anfield that goes through humility and work for Dieng. “Nothing is free in life. And to be successful, you have to know how to make sacrifices. I didn’t get there by chance. I can say that it is the fruit of my labor. And that’s just the beginning of the beginning.»

Despite his keen interest in Liverpool, Bamba Dieng has spent hours watching Pep Guardiola’s FC Barcelona. In front of the TV, he fell under the spell of Alexis Sanchez’s game, spent with the Blaugranas between 2011 and 2014. During his youth, Dieng identified with Alexis Sanchez. “Alexis Sanchez! I love Alexis. When I was much younger, I could already see myself in it… I was small in size like him. »He declared on Wiw Sport.