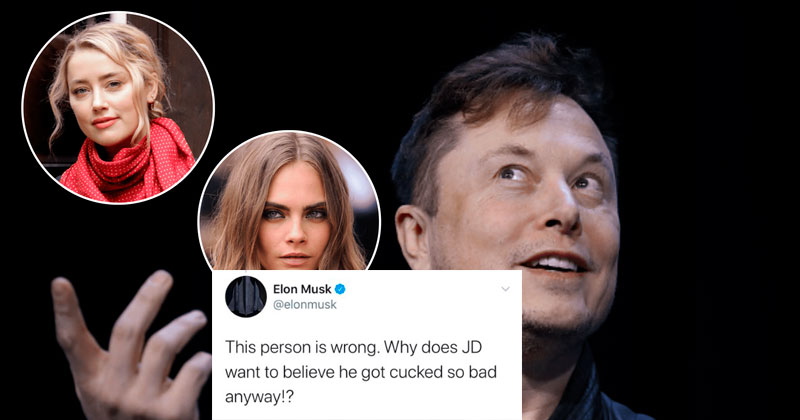 One of the most controversial revelations that have been exposed in the trial between Amber Heard and Johnny Depp, is the alleged love trio shared by Elon Musk, Amber Heard and Cara Delevingne.

Below we present you point by point, so that you better understand how this rumor originated and the evidence that has been presented so far. Adverts

1. Johnny Depp released a video of Amber Heard cheating on him with Elon Musk in his own apartment.

Johnny Depp presented a video recorded by the security camera of the elevator of his building, where Amber Heard can be seen hugging Elon Musk.

This video was used to show that Amber Heard and the owner of Tesla had a relationship, while Depp and Heard’s marriage was coming to an end.

The lawyers asked Drew “if his ex-wife had ever told him that Amber Heard had an affair with Cara Delevingne while married to Johnny Depp.”

Drew replied that “Yes, he told me that the three of them were having an affair.”

3. Elon Musk said he never got into Depp and Heard’s marriage

Elon Musk has denied these allegations multiple times, saying that while he did have an affair with Amber Heard, it was long after his divorce from Depp.

Elon has even downplayed the relationship with Amber, saying they saw each other “very rarely.”

The head custodian of Johnny’s building, Trinity Corrine Esparza, said she and her staff saw Elon Musk and Cara Delevingne go up to the apartment several times with Amber Heard.

“They pressed the button so many times that on one occasion the elevator didn’t respond and they had to take the stairs. All of this while Mr. Depp was filming in Australia,” the head janitor said.

5. Cara Delevingne was also caught on camera in the elevator

The newspaper “DailyMail” obtained a photo from the elevator security camera, where you can see a woman very similar to the model Cara Delevingne.

Said elevator was exactly the same, in which Elon Musk and Amber Heard had been seen embracing.

Elon Musk has used his Twitter account to categorically deny these accusations, claiming that Depp’s lawyers erased the dates of the videos to make it appear that their romance happened when they were still married.

On the other hand, Depp was not silent and messages he sent to a friend were revealed:

“I will show no mercy to what I thought was love, but it turned out to be a self-serving gold digger,” Depp said.

8. James Franco Said He Appeared In The Video Because He “Lived In The Same Building”

Johnny’s lawyers released a video showing Amber Heard getting into the same elevator with James Franco.

In the video, the man climbs up wearing a cap and looking down at the ground, as if trying to cover his face.

However, Heard’s lawyers ended up confirming that it is about James Franco, but excused themselves that both actors simply “coincided”, since in that season, the actor was staying in the same building.

Apple: finally a promo for the MacBook Air M1 with 16 GB of RAM