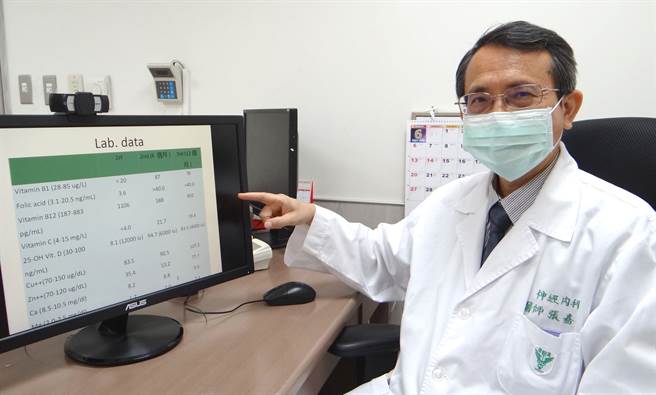 A 95-year-old man in Tainan suffered from low back pain and foot pain two years ago. In the past six months he even had limp and edema of his lower limbs. He had to travel in a wheelchair and went to the outpatient clinic of the Department of Neurology and Pain of Chi Mei Medical Center. He was found to be deficient in vitamin B1. Vitamin C, vitamin D, and minerals zinc and magnesium are given by the medical team once a week for 3 weeks with intravenous nutritional supplements and oral nutrients for 3 months. Old men no longer need to walk with a stick.

Jiayou Zhang, the chief physician of the Department of Neurology of Chimei Medical Center, pointed out that the old man had undergone lumbar disc surgery 20 years ago. The old man originally thought it was a recurrence of the old disease. However, the examination showed that the old man’s skin and mucous membranes had bleeding spots and dark blue blood vessels, which was actually a lack of vitamins and minerals. , After the entire course of treatment, the nutrients return to normal or even higher, and the previous abnormal nerve conduction function is also significantly improved.

Zhang Jiayou said that in the past, nutritional problems were mainly caused by insufficient calories, but nowadays, the problems of nutrition-related diseases are uneven or poor nutrition. According to the survey on the changes in national nutrition and health status from 2013 to 2016, the most serious vitamin deficiency in Chinese people’s dietary intake is fat-soluble vitamin D and vitamin E, while the calcium deficiency is the most serious in the dietary intake of minerals. Magnesium is followed by zinc and iron, and sodium intake is too high.

The current status of serum vitamins and serum minerals in Chinese people, if the prevalence of deficiency and marginal deficiency are used to assess the status of vitamin D insufficiency in Chinese people from the viewpoint of preventive medicine, the proportion of males aged 13 to 44 and over 45 years old is nearly 60% and 4% respectively. The proportion of women is as high as 80% and 60% respectively. Nowadays, the problem of uneven nutrition among Chinese people is worthy of attention.

Since September 2018, the Precision Medical Laboratory of the Clinical Pathology Department of the Chi Mei Medical Center has developed a micronutrient screening test for this purpose. The statistics of the micronutrient detection values ​​of outpatients in the Pain Department of the Chi Mei Medical Center have been reported for post-herpetic neuralgia (PHN). Newly diagnosed patients have 52% of vitamin D deficiency, 11% of vitamin C and 32% of zinc. Newly diagnosed patients with myalgia (Myalgia) have 73% of vitamin D and 19% of zinc. With adequate intervention of nutrients, symptoms are improved.