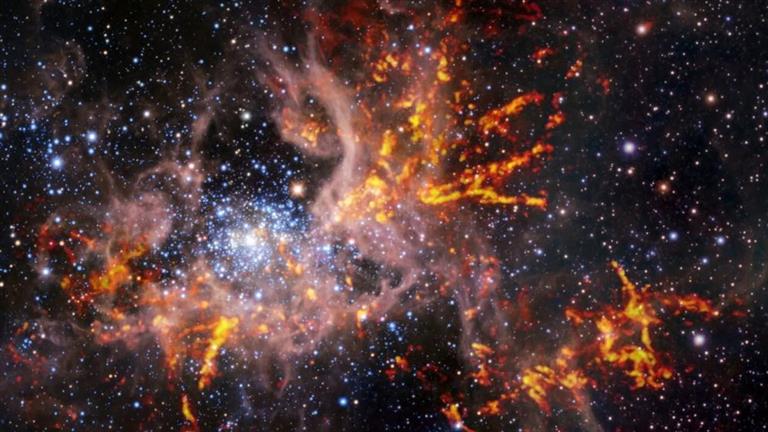 Astronomers have come up with a new conception of how stars are born, after examining a dazzling image of a starry constellation in the Tarantula Nebula, a huge cloud of gas and dust next to our galaxy.

Researchers said that the image shows the interaction between the massive gravitational force that drives star formation and the huge amounts of energy pumped by young, massive stars into their nearby environments, which can prevent the birth of stars.

According to Sky News Arabia, the Tarantula Nebula, located in a galaxy belonging to the Milky Way called the Large Magellanic Cloud, is a network of stars, gas and dust with a diameter of about 600 light-years. A light year is the distance light travels in a year and is equal to 9.5 trillion kilometres.

The Tarantula Nebula is located approximately 170,000 light-years from Earth, and is officially called the 30 Dorados.

It is called the Tarantula Nebula because some of its structure appears as glowing filaments of gas, dust and stars reminiscent of the legs of a spider. The composition of the nebula’s gas is similar to that of the early universe, as it consisted mostly of hydrogen and helium alone.

The European Southern Observatory published a picture of the Tarantula Nebula, showing weak gas clouds that may be the remains of larger ones, torn by the energy released by the massive young stars.

“We see stars forming where there is a lot of gas and dust, and there is certainly a lot,” said astrophysicist Guido de Marchi of the European Space Agency’s European Center for Space Research and Technology in the Netherlands, and co-author of the research, which was published in the Astrophysical Journal and presented at the American Astronomical Society meeting. of them in the Tarantula Nebula.”

“Stars form when gas clouds collapse under the influence of their own gravity and the gas becomes more and more dense. These clouds shrink and heat up until the core is hot enough to power the stellar engine, a massive nuclear reactor,” de Marchi said.

“We’ve always thought that when massive stars – 100 times more massive than the Sun – begin to form, they release so much energy that no more gas falls, which turns off the fuel in order to form more stars,” he added.

“The beautiful Tarantula Nebula observations obtained using the telescope now show that where the gas is dense enough, it continues to fall relentlessly and new stars can continue to form. This is very interesting and new.”

“One of the great mysteries in astronomy is why we are still able to see stars forming even today,” said University of Illinois astrophysicist and lead author of the study Tony Wong. “Why didn’t all the available gas collapse in a gigantic explosion of star formation long ago? Observations from the telescope. It could shed light on what’s going on deep in clouds and help us understand how gravity and feedback compete for the effect to keep the rate of star formation in check.”

“Personally, I love the Tarantula Nebula both scientifically and aesthetically,” de Marchi said. “It is a wonderful sight in the sky. I have often wondered what the night would be like if we were on a planet orbiting one of its stars, with brightly colored clouds and strands of gas crisscrossing the sky,” he added.