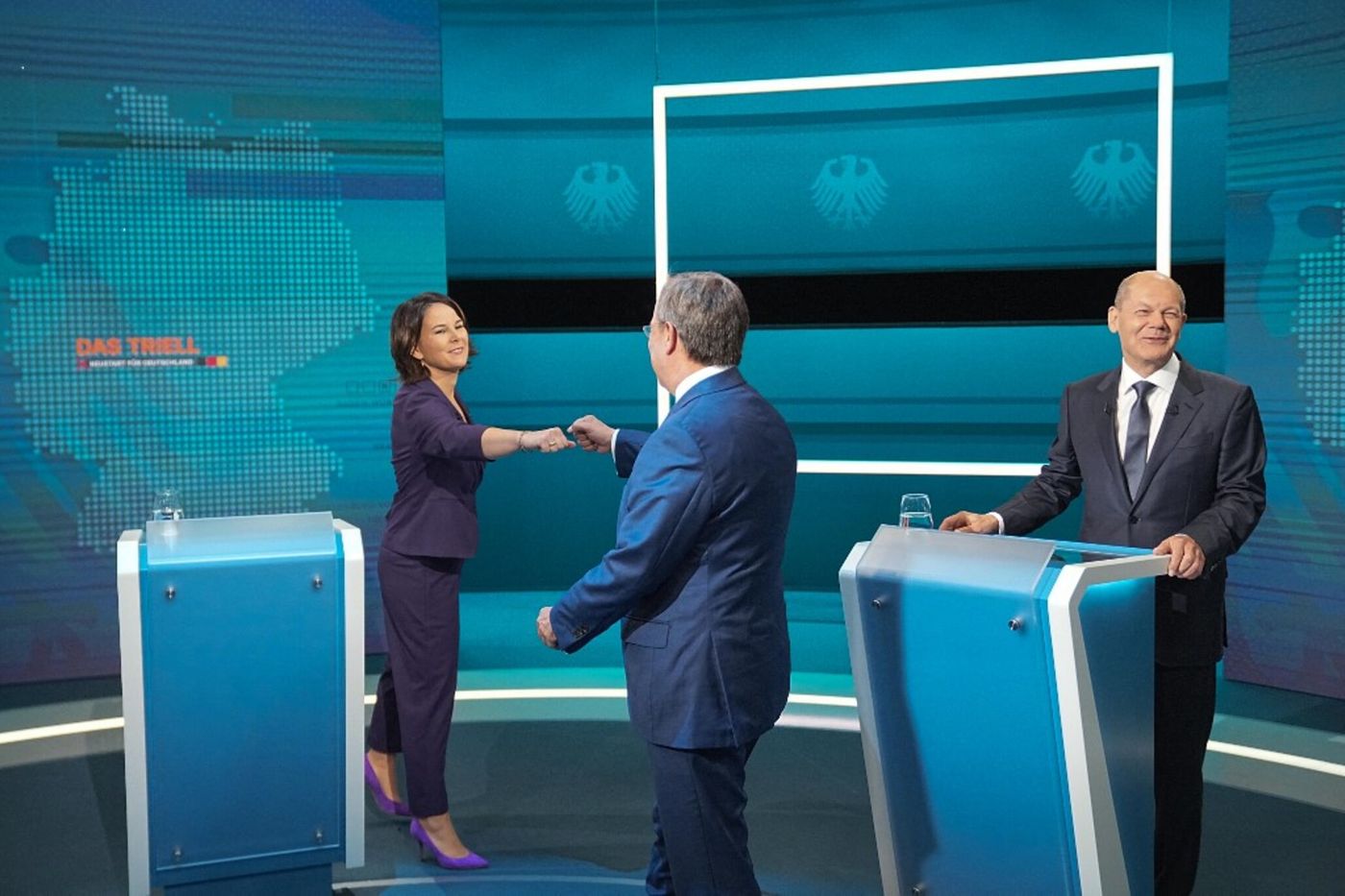 Two candidates were playing big last night, the third had to make no mistake. The Christian Democrat Armin Laschet (CDU / CSU) and the ecologist Annalena Baerbock (Bündnis 90 / Die Grünen), both manhandled in the voting intentions, were particularly offensive on the evening of Sunday, August 29 during the first of the three televised debates which will be organized between now and the legislative elections of September 26 in Germany. Carried by favorable polls, Olaf Scholz, the candidate for the chancellery of the Social Democrats (SPD) was by far the most serene of the three.

During the 100 minutes of this “Triell”, as it is called across the Rhine, the most offensive was undoubtedly the ecologist Annalena Baerbock. As the co-chair of an opposition political party, she had plenty of time to attack her two male competitors, whose parties have run the country together for two terms. For the candidate of the German Greens – credited with 17% of the vote, behind the SPD and the CDU / CSU – the federal government has failed on many issues, starting with the Afghan issue, with a lack of planning for evacuations.

→ ANALYSIS. In Germany, the green candidate is trying to relaunch

Same failure of the grand coalition in the fight against poverty and policy against climate change. According to her, Germany is not in a position to meet its commitments under the Paris Agreement. If there were three candidates on the set last night, voters will actually have to choose between two options: the grand coalition government’s policy of continuity, or real change, under the aegis of his party.

Christian Democrats at lowest in polls

For Armin Laschet, the debate was also of particular importance. While the Merkel page is about to close, after 16 years in power, the Christian Democratic formation is at its lowest in voting intentions (with 21% according to the latest polls, three points behind the SPD). His candidate therefore had to reassure his base and relaunch a campaign at half mast. During this debate, he accused his environmental competitor of wanting to hinder the work of companies with too many regulations and prohibitions, such as the end of cars with combustion engines and short-haul flights.

Armin Laschet also attacked Vice-Chancellor Olaf Scholz for not clearly refusing the idea of ​​working with the radical left party Die Linke, in the event of victory on September 26th. A possible coalition between Social Democrats, Greens and the radical left is seen as a nightmare for German conservatives. In a “Merkellian” momentum, Armin Laschet wanted to be reassuring, affirming that “The Christian Democrat team” was “Resolved” and had “Of a compass” to face the “Winds of change”.

Faced with his two competitors, Olaf Scholz, of a thoughtful nature, was the most sovereign. Showing his record – including 400 billion of stimulus plan during the pandemic – the current Minister of Finance has played the social card, praised the momentum of solidarity experienced during the pandemic and hoped that it survives the crisis. In order to maintain the good trends in the voting intentions – the SPD was credited this weekend with 24% of the voting intentions – the current darling of the polls had to make no mistakes in front of the cameras and seems to have fulfilled his contract . 36% of the televiewers give it winner of this “Triell”.