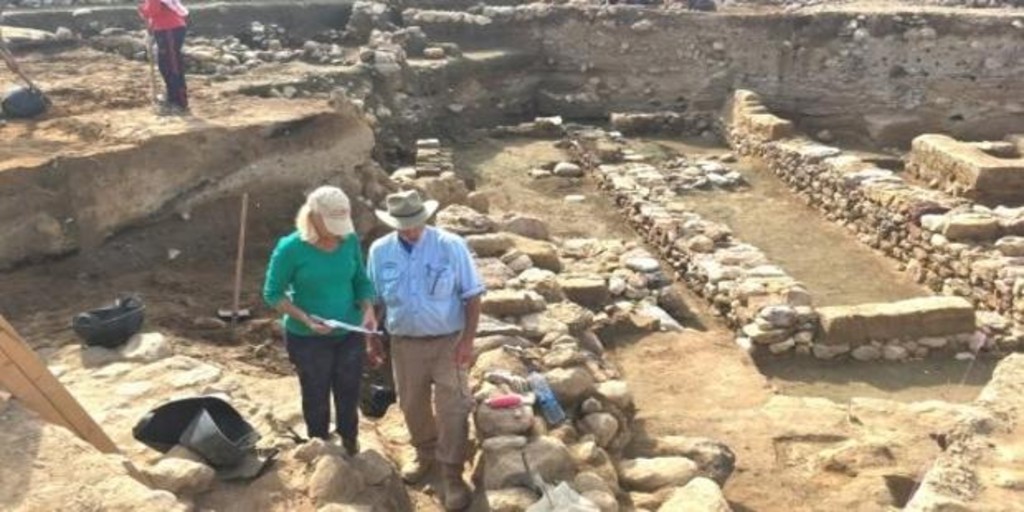 About 3,650 years ago, in the middle of the Bronze Age, the city of Tall el-Hammam it was in full swing. Perched high above the southern Jordan Valley and northeast of the Dead Sea, it had become one of the largest cities of the time, ten times the size of Jerusalem and five times the size of Jericho.

The site, built, destroyed and rebuilt over several thousand years, was a highly strategic and culturally important settlement. Today, it is profusely visited by archaeologists and scholars from around the world.

Some researchers, however, were keenly interested in a curious 1.5 meter thick layer that contained a whole series of ‘unusual’ materials, very different from the rubble one would expect to find as a result of wars and earthquakes. Among those materials were pottery shards whose surfaces had melted into glass, bubbling mud bricks, as if they had boiled, in addition to other partially melted building materials. And all at enormously high temperatures, much more than the technology of the time could have produced.

Now, and in a study just published in ‘Scientific Reports’, a team of scientists has provided evidence that, precisely 3,650 years ago, the city was destroyed by a meteor that exploded in the air. “The proposed air blast – the researchers write – was larger than the 1908 explosion over Tunguska, Russia, where a fireball some 50 meters wide detonated with 1,000 times more energy than the Hiroshima atomic bomb.”

According to James Kennett, one of the authors of the article, “we saw evidence of temperatures above 2,000 degrees.”

Kennett’s group had already worked on reconstructing another older air blast, some 12,000 years ago, and the melted and charred materials at Tal el-Hammam were familiar to him, so he joined other researchers to determine what it is. exactly what happened in the city 3,650 years ago.

The result, Kennett argues, is that “there is evidence of a great blast of cosmic air near this city.” The blast over Tall el-Hammam was strong enough to ‘level’ the entire city, crushing the palace and surrounding walls and all adobe structures. Analysis of the distribution of the human remains also indicated “extreme disarticulation and skeletal fragmentation.” In other words, the inhabitants were shattered.

The researchers also found small spherules rich in iron and silica, as well as molten metals. “I think one of the main discoveries is that of the quartz that received the impact – explains the researcher -. These spherules only form under very high pressure, and that means that there were incredible pressures”.

The blast of air, according to the study, may also explain the ‘abnormally high concentrations of salt’ found in the destruction layer: an average of 4% in the sediment and as high as 25% in some samples. The meteor probably fragmented when it came into contact with Earth’s atmosphere. And according to Kennett, “it may be that the impact partially hit the Dead Sea, which is very rich in salt.” Or perhaps its coasts, where salt is also abundant, so that the impact redistributed all that salt throughout a vast territory.

High soil salinity, the study authors say, could have been responsible for the so-called ‘Late Bronze Age Gap’, during which cities along the lower Jordan Valley were abandoned and the population declined from tens of thousands to maybe a few hundred nomads. The salty lands, which until then had been fertile, were indeed abandoned for centuries.

Tal el-Hammam is at the center of an intense debate over whether it could be the biblical city of Sodom, one of the two cities that the Book of genesis of the Old Testament says that they were destroyed as divine punishment for the wickedness of their inhabitants. One of those inhabitants, Lot, was saved by two angels who ordered him not to look back as he fled. Lot’s wife, however, did not obey and was turned into a pillar of salt. Meanwhile, fire and brimstone fell from the sky; several cities were destroyed; thick smoke rose from the fires; city ​​dwellers were killed and area crops destroyed in what appears to be an eyewitness account of a cosmic impact event. The parallelism, of course, is easy to establish.

“All the observations reflected in Genesis – Kennett concludes – are consistent with a burst of cosmic air, but there is no scientific evidence that this destroyed city is in fact the Sodom of the Old Testament.”