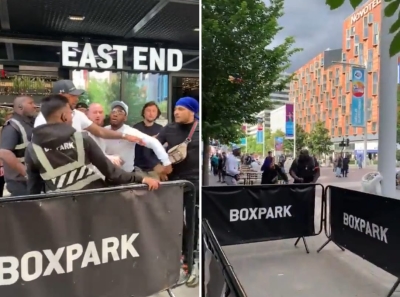 Al-Marsad newspaper: The pioneers of social media circulated a video clip of a security guard at the BOXPARK restaurant in London, who punched a person for causing trouble.

The video showed the calmness of the security guards who were trying to get the young man out and keep him away from the restaurant because there were no problems, and when the young man continued his fanaticism and quarrels with them, one of the security guards punched him in the face, a punch that knocked him to the ground and immediately fainted.

A number of activists, in their comments on the circulating video, stated that the security guard who punched the assailant was a former boxer named “Julius Francis” who had fought Mike Tyson in the boxing ring 22 years ago.

Without shame..a woman in her twenties boldly confesses: (My husband asked me for something forbidden by Sharia and threatened to divorce if I didn’t)?.. You won’t believe what the husband asked!!