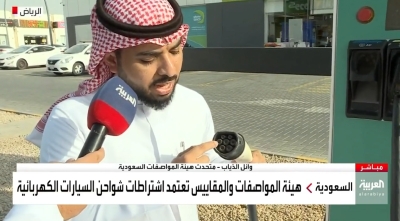 Al-Marsad newspaper: Wael Al-Dhiyab, the official spokesman for the Standards and Metrology Authority, explained how electric car chargers will be provided in Saudi Arabia and how long it takes to charge a single car in commercial stations.

During an interview with Al-Arabiya channel, he said from inside one of the approved centers for charging electric cars: “We were keen to set technical regulations and standard specifications that guarantee the safety of chargers that are imported from abroad or manufactured inside the Kingdom.

He continued, it was confirmed that the chargers are in conformity with the environmental conditions in the Kingdom and are subject to standard considerations to ensure that they are safe and their operating conditions are commensurate with the electrical network.

Regarding the types of chargers and the duration of charging, he explained: “The chargers are either working with alternating current, and these are often in homes, malls, cafes, and public places, and they are somewhat slow chargers ranging from 7 kilowatts to 22 kilowatts.

He added, the second type is chargers that operate on a constant current and are often fast or high-speed and are found in stations, and charging periods range from 4 hours to 16 hours, and some chargers range from 20 to 30 minutes, and some of them reach shorter periods, depending on the size of the battery and the method of use.

Biggest drop in GDP in 300 years: UK reports shock update to its economy in 2020 | Economy