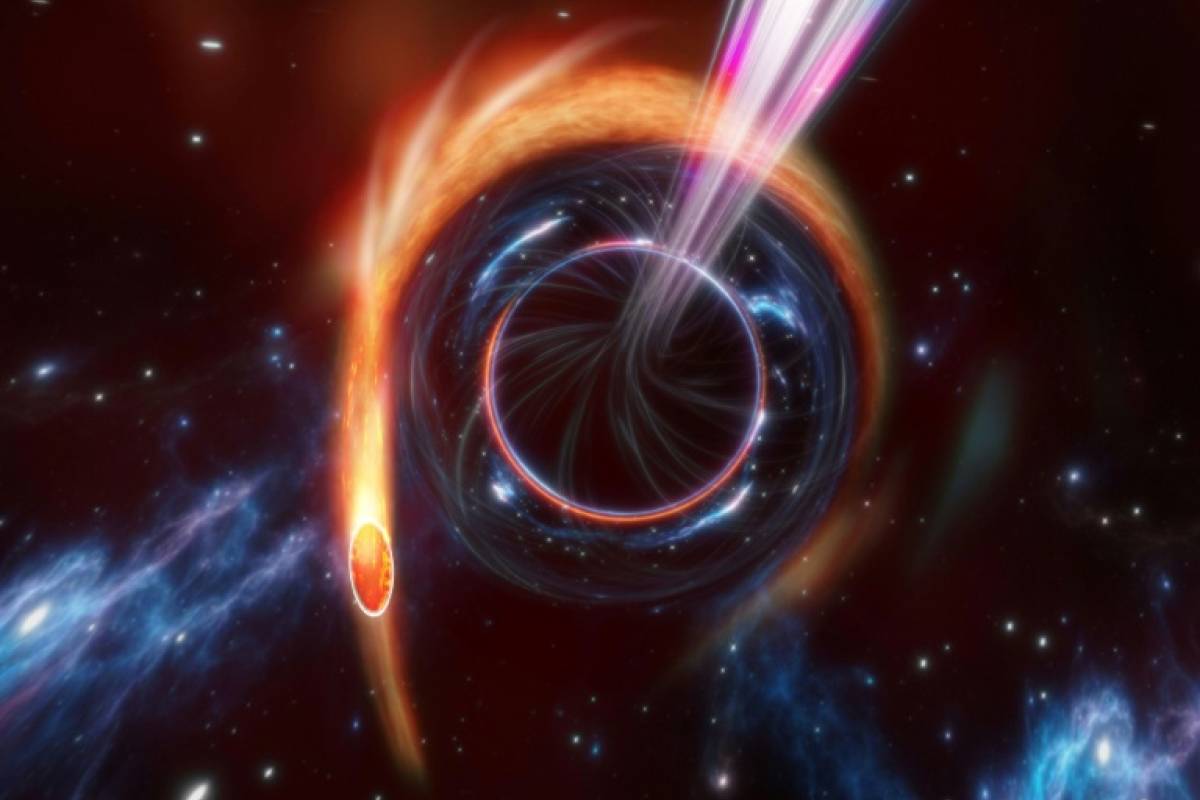 The scene happened 8.5 billion light-years from Earth: a supermassive black hole devouring a star expelled the remains of its “meal” in a jet of light, a very rare phenomenon that scientists have succeeded in to observe.

The gravitational attraction of a black hole is such that when a star has the misfortune to get too close to it, it is torn: the matter that composes it breaks up, then turns very quickly around the black hole before a part is swallowed up there forever.

This phenomenon, called “tidal rupture”, is very rarely accompanied by the emission of a luminous jet of particles, stealthy and traveling at a speed close to light, from the material of the star.

The last observation of a similar event dates back to 2012, recall two studies published this week in the journals Nature and Nature Astronomy.

New detection methods have since been developed, including a powerful camera installed on the Palomar observatory in California. It makes it possible to “scan the sky”, explains to AFP Susanna Vergani, CNRS researcher at the Paris-PSL Observatory.

This telescope, the “Zwicky Transient Facility”, “detects dozens of luminous jets in the sky every night and is able to select the most interesting”, continues the astrophysicist, who participated in the research.

One of them seemed atypical: it was not a supernova (the explosion of a star at the end of its life which produces extraordinary luminosity), nor a gamma-ray burst (the most powerful light source in the world). ‘Universe).

To see more clearly, an international coordination of astronomers has mobilized instruments from around the world to observe the phenomenon on a wide variety of wavelengths, from X-rays to radio waves.

Among these instruments, the NOEMA (Northern extended millimeter array) radio telescope in the French Alps, and a spectrograph of the Very Large Telescope of the European Southern Observatory (ESO) in Chile.

Scientists have determined that the jet of light originated, an estimated 8.5 billion light-years from Earth, around a black hole likely lurking in the center of its host galaxy.

The jet, dubbed AT2022cmc, is “with a power of more than a billion billion times the X-ray luminosity of our Sun”, details Susanna Vergani. And its duration is very short: 30 days. “Unlike jets from the active nuclei of galaxies, which span much larger scales, the AT2022cmc jet is transient” and appears to be due to the black hole tearing apart the star.

Where is he from? Not light swallowed up by the black hole since nothing can come out of these cosmic ogres. But rather from the accretion disk of matter surrounding the black hole, which ejects particles at its ends. Like a “tube of toothpaste tight around its middle”, describes the ESO.

The phenomenon, still poorly understood, could be caused by the speed of rotation of the black hole: it would rotate fast enough on itself to manage to produce such a jet. The future giant LSST (Large Synoptic Survey Telescope), under construction in Chile, should make it possible to detect other jets of this type, and thus better understand the extreme environments surrounding black holes.

After record fundraising, biotechs back on Earth