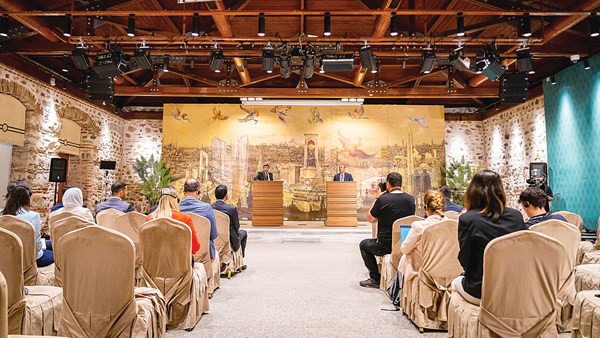 H.H. Sheikh Abdullah bin Zayed Al Nahyan, Minister of Foreign Affairs and International Cooperation, met with Mevlut Cavusoglu, Minister of Foreign Affairs of the Republic of Turkey. During the meeting, they discussed the outcomes of the state visit paid by His Excellency Recep Tayyip Erdogan, President of the Republic of Turkey to the UAE last February, and the results of the announcement of the exchange of cooperation agreements, memoranda of understanding and protocols between several parties in the UAE and their counterparts in Turkey, with the aim of strengthening Cooperation and expansion of partnerships between the two countries. The two sides also reviewed the prospects for joint cooperation between the two countries and the opportunities available to enhance it at various levels, to serve the mutual interests of the two countries and their peoples.
His Highness and Mevlüt Çavuşoğlu discussed the situation in the region and the importance of strengthening efforts to achieve peace, stability and development in it. The two sides’ discussions also dealt with developments on the regional and international arenas, the file of stability of energy and food markets in the world, and the importance of strengthening global efforts to reach a political settlement of the crisis in Ukraine.

His Highness Sheikh Abdullah bin Zayed Al Nahyan stressed that the Emirati-Turkish relations are developed and growing, and the leaderships of the two countries are keen to establish a sustainable model of fruitful partnership that is in the interest of their peoples and the peoples of the region. After that, H.H. Sheikh Abdullah bin Zayed Al Nahyan, Minister of Foreign Affairs and International Cooperation, held a joint press conference with His Excellency Mevlüt Çavuşoğlu, Minister of Foreign Affairs of the Republic of Turkey. At the beginning of the press conference, His Highness Sheikh Abdullah bin Zayed Al Nahyan said: “I am very happy to be with you, in this hospitable country, Turkey, and this beautiful and historical city of Istanbul, so thank you for the hospitality and kind words.” His Highness added: “Thank you for your standing and your condolences on the death of the late Sheikh Khalifa bin Zayed Al Nahyan, may God have mercy on him, as well as working together towards the coming years to serve the relationship between the UAE and Turkey, in light of the interest of His Highness Sheikh Mohamed bin Zayed Al Nahyan, President of the State, may he protect him.” God, and His Excellency President Recep Tayyip Erdogan, this relationship can achieve many of the hopes and aspirations of the two peoples, and strengthen Turkey and the regional Emirates.” His Highness said, “I hope that we can work together to support the teams of the two countries, Turkey and the UAE, to finalize the trade partnership agreement between the two countries, where we can double trade between the two countries.” His Highness said: “We can also work more to strengthen our partnerships around the world, and Africa is an excellent model for that, and there are many areas such as development and commercial partnerships, and reviving and creating the best conditions for Emirati and Turkish industries and companies.”

sustainable energy
His Highness explained: “Renewable energy is one of the sectors that we care about to strengthen relations. This sector is not only commercially successful, but is of great importance to our countries that are working towards reducing carbon emissions in the world.” His Highness praised the increase in the volume of trade between the two countries to about 50 billion dirhams. His Highness said, “We achieved an 82% increase in trade exchange in just two years, and this increase came due to the will and tireless work of the government of Turkey and the government of the UAE to revive this exchange.” His Highness added: “I am very happy with this latest momentum in the relationship, not only the commercial, economic and political momentum, but also the cultural one, and this was evident during your success of (Expo 2020 Dubai) and the valuable participation of Turkey .. so thank you.” His Highness said: “We talked about a set of regional and global challenges, most notably food security issues. It was not only challenges but also opportunities. We talked about opportunities for joint action between Turkey and the UAE to enhance our food security.” His Highness concluded his speech by saying: “I am grateful for your generosity and for this friendship and brotherhood between us, and I look forward to working together to make our peoples happy and serve them, and also to make this relationship a pride for all of us.”

Dialogue is necessary and fruitful
In response to a question about his recent visit to Israel, His Excellency Mevlut Cavusoglu stressed that dialogue is necessary and fruitful, as there can be differences, but cutting relations is not a good thing, and we have conveyed the message to our Palestinian brothers as well as the Israelis, and we will work to take additional steps with Egypt in this regard. ». His Excellency said: “We are making efforts for the stability of Libya, and with regard to Yemen, we have expressed our full solidarity with the UAE and Saudi Arabia following the terrorist attacks on both countries. We are fighting terrorism together in solidarity and are open together for peace and the interest of our peoples.”
In this context, His Highness Sheikh Abdullah bin Zayed Al Nahyan said: “I congratulate you, Minister, on your visit to Israel and our brothers in Palestine. There is no doubt that encouraging a return to the peace process and dialogue between Palestinians and Israelis is extremely important, as our region is full of sorrows and inconveniences, and our peoples deserve the best.” . His Highness added, “What you did during the visit is very important to encourage the Palestinians and Israelis to get out of the impasse.” His Highness stressed: “In the end, the interest is the service of the people, not the ideology. Unfortunately, when the ideological discourse escalates, the ability to work between the two parties becomes very difficult.” His Highness said: “His Excellency, I congratulate the Turkish diplomacy on what you have achieved, and I am sure that with the good offices that you are making between the Palestinians and the Israelis, and between the Russians and the Ukrainians, your role and work will be good.” The press conference was attended by Saeed Thani Hareb Al Dhaheri, UAE Ambassador to the Republic of Turkey.

The future of relations between the two countries
For his part, Mevlut Cavusoglu, Minister of Foreign Affairs of the Republic of Turkey, said that the talks with His Highness Sheikh Abdullah bin Zayed Al Nahyan touched on many issues related to bilateral cooperation between the two countries in various sectors, such as trade, economy, technology and energy, stressing that the UAE is the largest partner business for Turkey in the region.
His Excellency indicated that Turkish investors are keen to increase their investments in the UAE, and we also discussed during the meeting opportunities for joint work in other countries. His Excellency added: “We look forward to signing the trade partnership agreement with the UAE before the end of the year and are keen to reach the highest level of relationship and work together with the support and care of the leaderships of the two countries.”
In response to a question about the future of relations between the two countries and the opportunities for investment, His Highness Sheikh Abdullah bin Zayed Al Nahyan said: “It is important to mention that today, as we are talking about developing partnerships between the two countries in these areas, there is great interest from the UAE in the field of energy in general. In this regard, we talked about some ideas, especially in renewable, solar and electric energy.” His Highness added: “One of the most important companies today at the global level is the Abu Dhabi Future Energy Company (Masdar), and it has a great interest in searching for opportunities in Turkey, whether at the level of companies, the private sector or the Turkish government.” His Highness pointed out that “Masdar” is a pioneer in providing the cheapest production of solar energy in the world and we are proud of this achievement, and there is great interest from Emirati companies in Turkey in the field of energy, as well as the fields of ports and railways. His Highness said: “Turkey is a very important country with great capabilities in the field of tourism. This is one of the vital sectors, and we hope to search for opportunities to strengthen the relationship in this regard.” His Highness added, “Covid-19 is an opportunity for all of us to realize that there is more work to be done in the health sector, and the pharmaceutical production sector will witness interest on our part and a search for investment opportunities in Turkey.” His Highness indicated that our interest is not only focused on working in Turkey, but also working with Turkey in other countries in the world such as Africa, Latin America, Central Asia, Southeast Asia and South Asia. There are great opportunities and great respect for Turkey and the UAE in these countries, and we can strengthen this relationship by being present. Better joint.

[국제]French, German, and Russian leaders talk on the phone…”Negotiation immediately” vs “If sanctions are lifted, the port blockade will be lifted”

Vitamin A and its benefits to strengthen vision, skin and bones