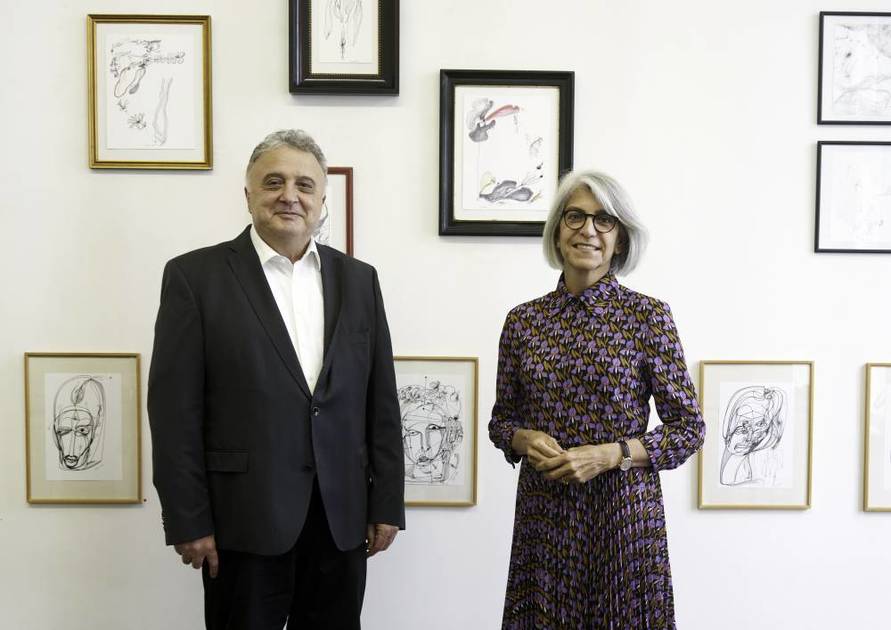 The Abu Dhabi Festival is participating in the Art Week in Berlin, through the exhibition “Beyond Belief”, as part of its strategy to enhance cultural diplomacy efforts through cooperation and co-production, in cooperation with the Center for Contemporary International Art “Haus Kunst Mitte”.

The art exhibition, which will run until November 21 in the German capital, Berlin, includes the works of more than 35 artists from around the world, including Emirati artist Aisha Juma, through a group of portraits and faces that make up her artwork “automatic drawings”. The opening was attended by Hafsa Al Ulama, the UAE ambassador to the Federal Republic of Germany, and Jeremy Issacharoff, the ambassador of the State of Israel to Germany, and they toured the exhibition and inspected the works of the participating artists.

Hafsa Al Olama gave a speech in which she praised the strong cultural relations between the state and Germany, especially in the artistic field, as the Abu Dhabi Group for Culture and Arts is keen to participate in German art festivals and exhibitions. She added that the Abu Dhabi Festival sponsored the exhibition within the framework of Abu Dhabi’s role in encouraging art worldwide, as art carries a message of communication and peace in a language that all peoples and nations understand, and gives the opportunity to reflect on reality and think of a better future away from intolerance of opinion or doctrine.

Huda Ibrahim Al-Khamis, founder of the Abu Dhabi Group for Culture and Arts, founder and artistic director of the Abu Dhabi Festival, said: We affirm our commitment to strengthening the efforts of cultural diplomacy that express the status of the state, its values ​​and its mission to consolidate peace, as our contribution to strengthening cultural relations between the UAE and the world.

She added: The Abu Dhabi Festival returns for the second time to Germany as part of the Berlin Art Week, in partnership with the Center for Contemporary Art “Haus Kunst Mitte” to participate in the important art exhibition that includes more than 35 artists from around the world, in which the festival is pleased to present the Emirati artist. Aisha Jumaa with her work “Automatic Drawings”, which embodies feelings of love and sympathy.

She said: We celebrate the diverse and open cultural heritage of the UAE, coinciding with the fiftieth year, and on the occasion of the one-year anniversary of the Abrahamic Peace Agreement, inspired by the vision of the UAE and its banner that upholds the principles of human brotherhood by spreading tolerance, openness and respect for the other, and calls for human convergence in our differences and consensus, in an effort to build Bridges of communication and understanding between our cultures, languages ​​and spiritual beliefs. I extend my deepest thanks and appreciation to Ambassador Hafsa Al Ulama, all the employees of the UAE Embassy in the Federal Republic of Germany, and all those responsible for the success of the exhibition and the Berlin Art Week.

The exhibition formulates discussions about whether spirituality, with its new ideas, has the ability to transcend cultural, linguistic and intellectual barriers, and overcome the challenges of intellectual and religious extremism to promote a more peaceful and tolerant society. The artists participating in the exhibition present their perception of the realm of spirituality, mystical experiences, and spirituality as a stage of identity through their artworks that represent earlier waves of spiritual interest in the 1960s and 1980s, including works by Joseph Beuys, George Basilitz, Mary Burmeister, George Brakes, and Anthony Tapis.