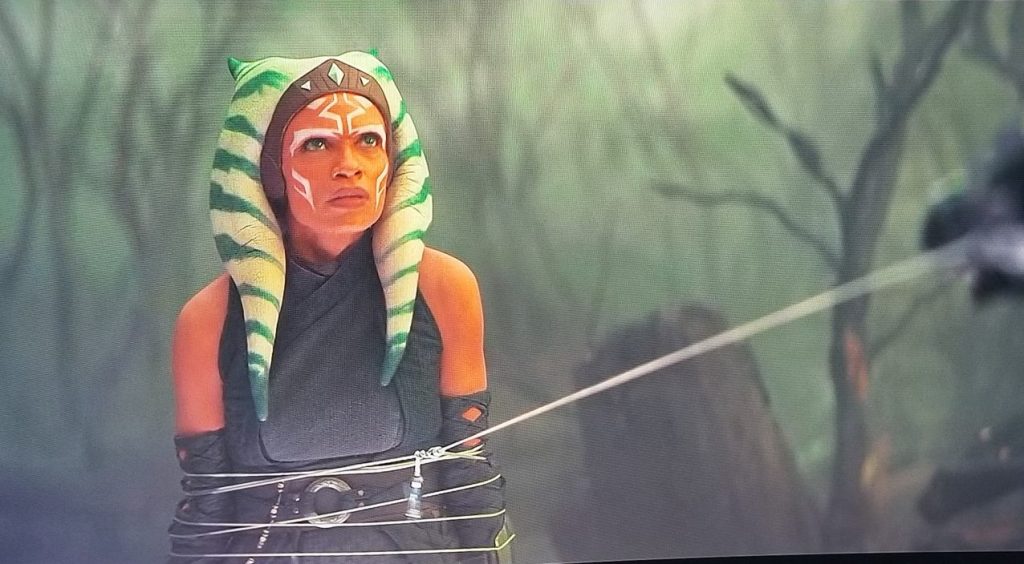 Warning: This recap has spoilers about today’s Disney+ drop of The Mandalorian Chapter 13: “The Jedi”, directed and written by Dave Filoni

We knew Mando was bound to meet Ahsoka, as Katee Sackhoff’s Bo-Katan advised the bounty hunter to track her down on the forest planet of Corvus; Mando yearning to reunite The Child aka Baby Yoda with his Jedi kin. And while we could expect tonight that Ahsoka would be wielding double lightsabers and slicing through her enemies like butter, the character provided Mando, as well as us, a major download as to who exactly The Child is. After Mando tracks Ahsoka down in the burnt-down forest planet, she reads The Child’s mind and learns that his name is Grogu. Ahsoka tells Mando that The Child was raised in a Jedi temple on the planet of Coruscant (the main city planet, the capital of the galaxy which we see in the prequel movies). When the Empire came to power following the Clone Wars, Grogu became hidden. “Someone took him from the temple,” says Ahsoka, “then his memory becomes dark.” She also brings us up to speed on what’s been happening in a post Return of the Jedi world here and that’s “The Jedi Order fell a long time ago”.

Ahsoka refuses to train The Child to become a Jedi as his attachment to Mando “makes him vulnerable to his fears”.

“I’ve seen what feelings do to a fully trained Jedi Knight,” Ahsoka tells Mando, perhaps referring to her former Master Anakin Skywalker who turned to the dark side and became Darth Vader. “I will not start this child down this path; better to have his abilities fade.”

Mando looks to make an agreement with Ahsoka: He’ll help her fight the evil Magistrate on Corvus, if she will in turn train Grogu. Mando arrives to a planet where its walled city has its citizens suppressed and tortured by the tyrannical oversee of the Magistrate and her right hand baddie Lang. The troops under her oversee wear the Imperial red and blue brick insignia. At the onset of the episode, after we see Ahsoka slicing through her troops, the Magistrate soon meets Mando and makes him an offer: Kill Ahsoka, and he can have the Magistrate’s Beskar staff, which is made from the same impenetrable steel material as his armor. Mando, of course, has a heart, and sides with Ahsoka in her siege and redemption of the walled city.

Who is the Magistrate? Ahsoka informs Mando that she’s Morgan Elsbeth. While that might sound like a librarian’s name or a character from Little House on the Prairie, “Morgan saw her people massacred during the Clone Wars. She survived and her anger fueled an industry which helped build the Imperial Starfleet, she has plundered worlds…” says Ahsoka. Morgan in her gown get-up and use of Beskar staff feels like she’s in the same Force warrior class as Donnie Yen’s character Chirrut Imwe from Rogue One: A Star Wars Story.

In the episode’s climax we’re actually treated to a wild lightsaber vs. Beskar staff battle between Ahsoka and Morgan. It’s fierce and shows that lightsabers aren’t the almighty weapons in the galaxy. Ahsoka is victorious, while Mando wins a shootout against Lang. But the one takeaway here for Ahsoka, aside from bringing order to the walled city, is that she demands Morgan to spill the beans on the whereabouts of another deeper universe Star Wars Imperial bad guy: Grand Admiral Thrawn, a blue faced male Chiss, who was an ally to Darth Vader. We last saw Thrawn in the animated series Star Wars Rebels, and it’s quite possible here he will ultimately become the main villain on The Mandalorian, taking over for Giancarlo Esposito’s Moff Gideon. If Bo-Katan wants the dark saber from Gideon, then Ahsoka wants to see Thrawn’s downfall.

With the Magistrate overthrown, Ahsoka awards Mando the Beskar staff. However, she still refuses to train The Child.

“There’s one possibility,” Ahsoka tells Mando. He can take The Child to Tython where he’ll find the ruins of an ancient Jedi temple that has a strong connection to the force. He should place Grogu “on a seeing stone at the top of the mountain. Then Grogu may choose his path. If he reaches out through the force, there’s a chance a Jedi may sense his presence and come searching for him. Then again, there aren’t many Jedi left,” says Ahsoka.

Which leaves us with a huge, wonderful cliffhanger: Is Mark Hamill’s Luke Skywalker bound to make a cameo on The Mandalorian?