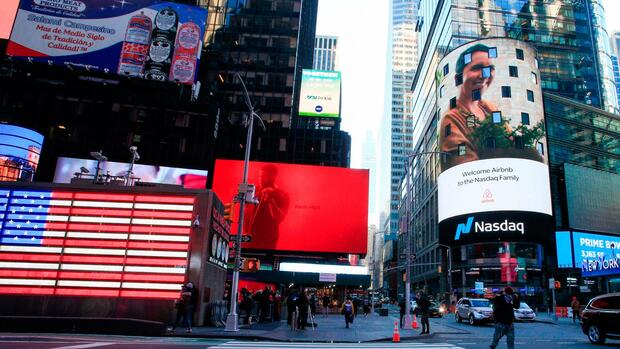 There are a few successful IPOs on the New York Technology Exchange these days.

New York Following DoorDash and Airbnb this week, the biotech company AbCellera Biologics has joined the series of IPO superlatives. The share price of the Canadian provider of artificial intelligence for pharmaceutical development has more than tripled on the Nasdaq after the IPO. In addition to the billionaire Peter Thiel, the German investor Christian Angermayer also benefits from this.

AbCellera shares placed 24.15 million shares on the Nasdaq at a price of $ 20 each. After going public, they climbed to more than $ 71. Overall, the Vancouver-based company took in 483 million.

AbCellera relies on technology platforms that, thanks to artificial intelligence, can filter out the most promising therapies or drugs from a mass of data. Among other things, AbCellera has the latest Covid antibody agent from Eli Lilly determined.

Lilly wants to produce one million doses of the drug running under the name “Bamlanivimab” by the end of the year, which is approved for mild and moderate Covid diseases. The US government has already secured 300,000 of them. AbCellera will receive a share of the drug’s sales.

“The future belongs to biotechnology,” the investor Angermayer told Handelsblatt. With his investment company Apeiron, he took over one percent of the company when it was valued at 360 million. On Friday, the company was meanwhile worth more than $ 16 billion on the stock exchange.

Investors are increasingly turning to biotechnology

Many investors were just shifting their weight from tech to biotech, Angermayer explains. “We started doing this 5 years ago. Today, our portfolio consists of more than 60% biotech, ”explains the German investor.

At AbCellera, he was primarily convinced by the management: “Carl Hansen unites the scientist with the tech CEO,” says the German investor, who co-founded Ribopharma at the age of 20 and has been an investor since the sale.

Angermayer had already launched an astonishingly successful IPO with Compass’ Magic Mushroom IPO in September. The German-American Peter Thiel has also invested in both Compass and AbCellera. The PayPal and Palantir co-founder Thiel is even on the board of AbCellera.

Angermayer found the AbCellera deal and, according to his own statements, presented it to Peter Thiel. With other deals it’s the other way around. “We have around 15 companies that we have both invested in,” he explains.

Wall Street is getting ready for a second wave of tech IPOs in the face of the recent rally. It attracts with new paths on the parquet.