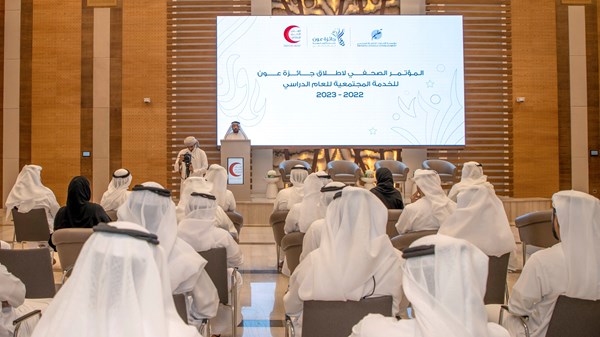 The Emirates Red Crescent Authority and the Emirates Foundation for School Education launched the Aoun Award for Community Service in its tenth session, at the level of educational institutions in the country for the academic year 2022-2023.
This came during a press conference held yesterday at the authority’s headquarters in Abu Dhabi, in the presence of Hamoud Abdullah Al-Junaibi, Secretary-General of the Red Crescent, the Deputy Secretary-General, and Lubna Al Shamsi, Acting Executive Director of the School Operations Sector at the Emirates Foundation for School Education, in addition to a number of officials from both sides.
The topic of the award deals with a number of humanitarian and societal fields that serve important segments such as needy families, orphans, people of determination and the elderly, and the adoption of any other initiatives that serve the community, as educational institutions compete in achieving these goals by adopting initiatives that contribute to their strengthening.
In his speech during the press conference, Rashid Mubarak Al-Mansoori, Deputy Secretary-General for Local Affairs at the Emirates Red Crescent Authority, stressed the interest of the supreme leadership of the authority to enhance the aspect of social responsibility in all educational institutions, so the Aoun Award finds support and assistance from officials in the authority, as it is one of the qualitative initiatives that It contributes to instilling the concepts of volunteer, humanitarian and charitable work among students, urging them to extend a helping hand to the needy, and qualifying the student community to actively participate in humanitarian and charitable programs and activities.
He pointed out the importance of the great role that children and youth play in the renaissance and progress of countries, and in leading human societies towards broader horizons of development and prosperity.
He said: The UAE has worked from the beginning to create a suitable climate for young people to discover and develop their talents, and to harness their energies in what benefits them and benefits their families, society and humanity as a whole.
Al-Mansoori stressed that the Aoun Award for Community Service enhances the spirit of creativity and competition among students, and motivates them to pioneer fields of volunteer and charitable work. The award also contributes to deepening the concept of self-motivation and attracting students to participate in various activities.
He added: “Since last year, we have been keen to expand the scope of the award to include people of determination, as they are an important segment of society and the student arena, and they possess skills and capabilities that can be employed to serve humanitarian and volunteer work in general.” The Deputy Secretary-General said: “Every year the circle of participation in the award’s activities expands from our students. In the last session, 3760 male and female students participated, belonging to 201 educational institutions, including universities, schools, kindergartens and centers for people of determination, and the number of their initiatives in this regard reached 829. In various societal fields, and to enhance the capabilities of the members of the Student Crescent and rehabilitate them, 173 training courses were carried out, in which about 5042 male and female students participated in various academic levels.
At the conclusion of his speech, Al-Mansoori expressed his thanks and appreciation to the authority’s partners in this regard, led by the Emirates Foundation for School Education, the Department of Education and Knowledge, higher education, partnership schools and universities, and the Zayed Higher Organization for People of Determination.
For her part, Lubna Al Shamsi stressed that the Emirates School Education Foundation attaches great importance to all voluntary initiatives that target community service, enhance the Emirati student’s cognitive traits and personal skills, and document his connection to the heritage and the authentic Emirati values ​​of the community represented in giving and extending a helping hand.
She explained that the effective partnership between the Foundation and the Red Crescent in the Aoun Award contributes to promoting a culture of volunteerism at the state level, and consolidating the principles of the fifty in the preservation of human dignity and the provision of humanitarian aid, and we hope that the students’ participation will contribute to creating innovative scientific dimensions for charitable work in the country.
She stated that the Foundation is keen to increase the number of participants in the award and has created a coordinator for volunteer work in all government schools. The Foundation has also worked on updating the student’s guide to volunteer work and is keen to encourage parents to participate in all volunteer programs to spread the values ​​of giving and charitable and humanitarian work.
It is noteworthy that 30,000 dirhams were allocated to the first place winner at the university level, 25,000 dirhams for the second place, 20,000 dirhams for the third place, and at the school level, 25,000 dirhams were allocated for the first place, 20,000 dirhams for the second, and 15,000 dirhams for the third place. For kindergarten, 15,000 dirhams were allocated for the first place, 10,000 dirhams for the second place, and 8,000 dirhams for the third place, in addition to 15,000 dirhams allocated to the first place at the level of rehabilitation centers for people of determination, 10,000 dirhams for the second place, and 8,000 dirhams for the third place.

Russian bombers near the Finnish border for the first time… What does that mean?

Charlotte Gainsbourg: why her life in New York...

The Ile-de-France region suspends its subsidy to the...

Behind the scenes of the news／The gunman in...

man died after falling during a fight