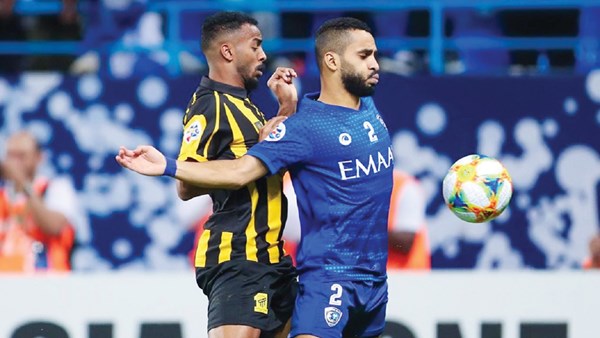 The fans are waiting for the important and fiery match between the leaders Al-Ittihad, with its guest and its direct chaser, Al-Hilal “the title holder” today, at the King Abdullah Sports City Stadium in Jeddah, in a “semi-decisive clasico”, at the conclusion of the twenty-seventh stage of the Saudi Football League.
Al-Ittihad leads the standings with 61 points, 6 points ahead of Al-Hilal, 4 stages before the end of the season, and a victory by two goals is enough to embrace the title absent from its coffers 12 years ago.
Al-Hilal decided the first leg 2-1 about two months ago, because the league rules do not depend on calculating goals outside the rules by weakness.
Al-Ittihad hopes to restore balance after it stumbled against Al-Fateh (4-4) in the last stage, which provided the opportunity for Al-Hilal to reduce the difference to 6 points. The Federation enters the match in full ranks, after the recovery of its Egyptian defender Ahmed Hegazy and his return to group training, after a long absence due to an injury he suffered last February in the African Nations Cup with his country, but his participation in the match remains dependent on his physical readiness.
On the other hand, Al Hilal seeks to rise quickly and compensate for its loss against Al Fayhaa on penalties in the final match of the King’s Cup.