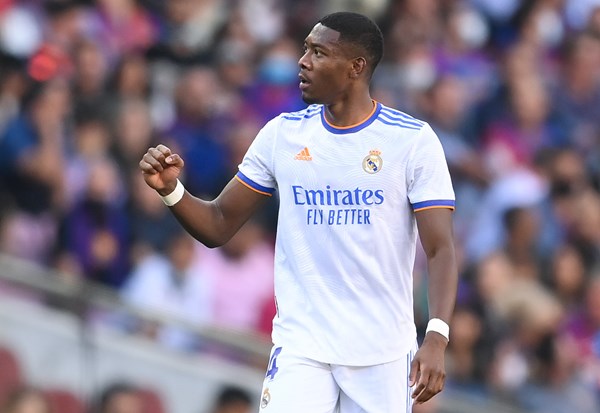 Real Madrid defender David Alaba believes that Real can beat Liverpool through self-confidence as well as a unique personality, when the two teams meet next Saturday in the Champions League final, which Real Madrid won 13 times.
Austrian international Alaba said in statements to “Kicker” magazine published today, Monday: We are Real Madrid. With that self-confidence, we are going to Paris to win.
Real Madrid, the Spanish champion, had regained its balance after losing to Manchester City 3/4 in the first leg of the semi-final and turning the scales in its favor by winning 3/1 in the second leg.
Alaba said: This match and other recent performances by Real Madrid at the European level shed light on the character of the team under the leadership of coach Carlo Ancelotti.
Alaba added: “We have a very distinctive spirit and a competitive personality, and we have shown this in the playoffs. We are a team that always comes back and never gives up.
But the former Bayern Munich star is aware of the efficiency of Liverpool, who competed with Manchester City for the English Premier League title until the last stage, which was held on Sunday.
“It is a very creative football team, and most importantly, it has tremendous strength,” Alaba said.
“With Jurgen Klopp, they have a coach who harnesses this strength to lead the team on the desired path.”

Comments on the semiconductor industry: Weir shares increase its holdings in Beijing Junzheng Comments: The two IC design platforms complement each other in resources and work together to lay out the blue ocean of automotive chips_Oriental Fortune Network

An unpleasant smell emanated from an apartment in Kuwait..After opening it, it was a surprise!