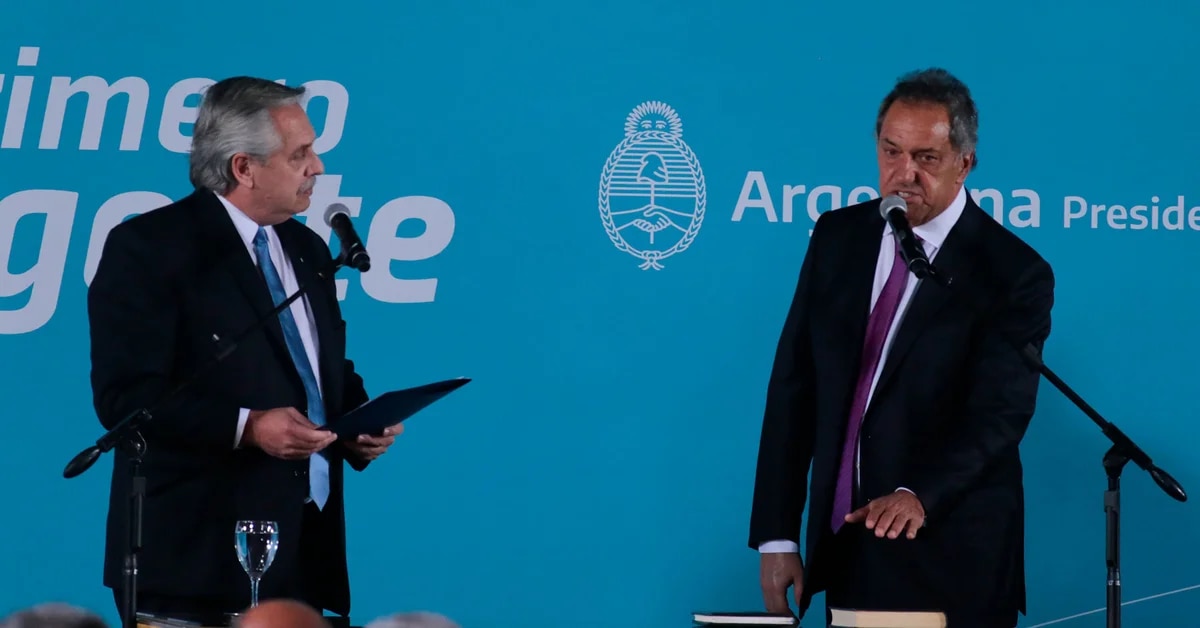 The President swore in the new Minister (Luciano González)

In a ceremony that took place this afternoon at the Casa Rosada Bicentennial Museum, Alberto Fernandez took an oath to Daniel Scioli as new Minister of Productive Developmentinstead of Matias Kulfas.

Before proceeding to the formality of the oath, the President asked for a moment to make some “reflections”. “The world is experiencing a unique moment in its history. That is why we are not aware. It is a time that has been marked by an enormous misfortune such as the pandemic and by a management that preceded us, which left us with very serious problems. It is a time that when we begin to overcome the pandemic, a war of dimensions appears that we did not know until today, ”the national president began by contextualizing.

“Argentina has been able to navigate these two and a half years in a significant way. We recovered industrial activity, the economy, we grew by 10.3% in 2021. Matías Kulfas has to do with many of these results and I want to thank him for all the effort, all the commitment, everything he did in this time ”he continued, publicly acknowledging for the first time the management of the outgoing Minister.

Kulfas’ resignation was hastened after Cristina Kirchner broadcast an off-screen statement by officials from the Ministry of Productive Development, in which they stated that the tender was in the hands of officials who responded to the vice president and that “They put together a tender document tailored to Techint”. That happened a day after the speech given by the former president for the 100 years of YPF and deepened the internal ruling party.

After dedicating those words to Kulfas, Alberto Fernández continued with Scioli’s oath, to which he said: “I want to thank you, Daniel, because when I called you, you were there. We have a friendship of many years. Thank you for coming to take charge at this time. Your time has come”.

For his part, the former governor of Buenos Aires, who left his place as ambassador to Brazil, said: “I am going to seek, as the President instructed me, in every corner of the country, to enhance all the possibilities that exist, working with all business sectors. and convinced that Argentina is still standing up. Also with SMEs and financial entities”.

“Tomorrow, my first activity will be at INTI. I am going to see all that passion for innovation and the need we have, more than ever, to strengthen our industry,” added Scioli. And he concluded his short speech: “I am very grateful to be able to humbly put my shoulder to the call made by the President of the Nation”.

Then, before the first question at the press conference, the new Minister assured: “I want to give peace of mind and predictability. Uncertainty is often installed about the prospects, about the availability of reserves. Argentina is above USD 7,000 million per month of imports, so obviously there is no type of stocks or super stocks, what there is is a responsible administration.

Within hours of taking office, yesterday Scioli had met with Martín Guzmán, Minister of Economy, and Miguel Pesce, President of the Central Bank, in the prelude to what will be an important process for the Government ahead of the elections. Focusing on concerns about the rate of imports and inflation, the three discussed the country’s upcoming production and macroeconomic policies.

After the abrupt departure of Matías Kulfas, the former Buenos Aires governor will have the difficult task of trying to change the economic course together with Guzmán and prepare a better scenario for 2023. Those details were the ones that began to be analyzed this Tuesday at the Palacio de Hacienda, policies that will point to a continuity of economic growth with job creation and to strengthen macro stability.

Guzmán, Pesce and Scioli met with the focus on concerns about the pace of imports and inflation

Militao returns to the coronation of Merengue in C1 and the choice of Mbappé!

[US market conditions]Stocks are rising, and the chairman’s remarks give a sense of security-The dollar is in the upper 133 yen range-Bloomberg