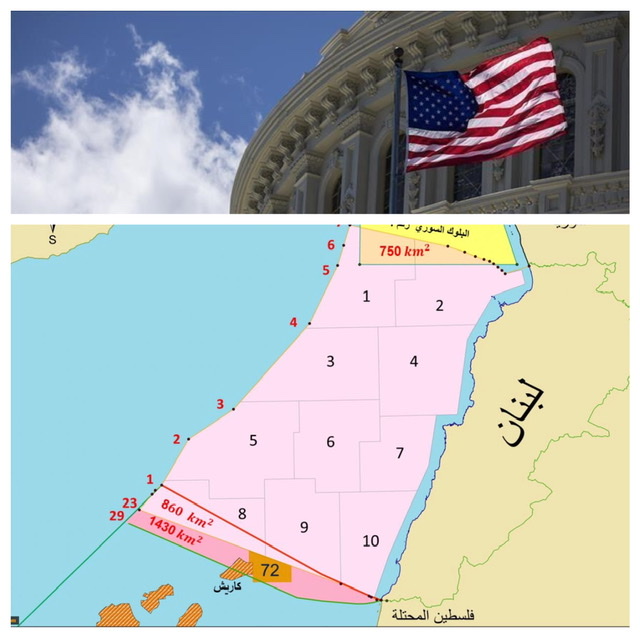 Exploration in a field Karish postponed waiting What will Washington do? Confrontation Nasrallah / special – “sail”

Between the fourth and eleventh of next September, the Zionist entity will start extracting gas from the field Karish disputed with Lebanon.

Prior to that, that is, on the twenty-fifth of this month, a date for the return of the American mediator was tentatively set Amos Hockstein to Lebanon to reportThe Lebanese officials responded to the Israeli responses to what the three presidents put forward during the last meeting held between them and the American mediator regarding the demarcation of the maritime borders with occupied Palestine.

the two dates are connected, directly and can’t Separate them, whatever the considerations and developments.

Without announcing Tel Aviv’s approval of Lebanon’s conditions, upon return Hockstein To Lebanon at the end of this month, she will not be able to start extracting gas from a field Karish And other fields beyond Karish Accordingً When the Secretary-General of Hezbollah, Sayyed Hassan Nasrallah, announced it on more than one occasion, during which he appeared recentlyً And because of the steps that followed in terms of sending the three marches and at the level of broadcasting the coordinates of the fields that Israel intends to start working on in a videotape, he sent a clear and precise message regarding for goals Which will strike if the Israeli position is not responsiveً with the Lebanese position.

The issue, then, has become a matter of a very few weeksً Do not exceed the number of fingers on one hand Libni The thing is appropriate, about the direction in which the next steps or even future events may fall within its framework.

Of course, the deadlines are no longer open.

After the direct, resolute and categorical speech that he played,ّNasrallah, who is considered with exceptional seriousness in the Zionist entity, not only in view of the effects it may have on the level of gas exploration, which cost Israel huge sums and promises it wealth that would put it in the list of rich countries, but alsoً Looking at what can insinuate it The words of the Secretary-General of Hezbollah are dangers to the entity Zionism and security In a way that goes beyond the issue of oil and gas extraction or non-extraction. What is leaking so far in the Israeli media refers in one way or another to the unprecedented Israeli anticipation process for what might happen from the events, some of which fall into the calculations of the leaders of the Israeli enemy and its apparatus, and some of them are not.come onOther may not be includedًin it and may be formed in hAFor the situation to escalate, there will be surprises in the quantity and type of operations that will target the Zionist entity.

What reinforces these impressions, which have turned into well-established facts, will not be long before Make sure its correctnessis the difference in the way the American mediator abuses Amos Hockstein With the file of negotiations to demarcate the maritime borders between Lebanon and the Zionist entity. and became knownً On his last visit, he changed his style and the way he dealt with the file referred to mechanism ,His concern became to keep the resistance away, in any way, from escalation or targeting a field Karishnoteً In previous periods, he used to treat some Lebanese propositions with disdain, equivocation, and even mockery, on top of which is the equation of the Qana field against a field. Karish. tobefore it becomes His main concern today is to pass this equation according to what information about the conclusions indicated by the American mediator says that he reached it and is waiting for the Israeli response to it. for Israel pass Gas pipeline through Turkey to Europe through the Qana field.

The vocabulary of irony and mockery disappeared in the approaches Hockstein to the issue of demarcation, and he no longer talks about the necessity of Lebanon giving up what he called slogans in this regard, and is now dealing seriously with the issue, tryingً One way or another, he avoided what he was accused of by followers of the issue when he was said to be procrastinatingّAnd he is trying to cut the time and pass it, to ensure the extraction of gas without any return to Lebanon, pending an agreement in the Naqoura negotiations on the demarcation of the border, and without reaching an agreement to lift the embargo imposed on Lebanon amicably and so far has prevented it from extracting gas from its fields and benefiting from its natural wealth.

And the matter became contingent not only on reaching an agreement in negotiations galley, but alsoً Allowing international companies to operate in Lebanon to enable it to extract and sell its gas and oil.

This is the bottom line for the United States, which is accused by the resistance of imposing a siege on Lebanon, isolating it from the rest of the world, and causing the collapse it is experiencing. This means that Washington and Tel Aviv’s acceptance of the Lebanese conditions is that an alternative war is being waged against Lebanon through economic, financial and social means to besiege it and drag it to wherever it is. he want to ,It will be an explicit declaration by them of their defeat in the alternative war that was waged and intended by starving and impoverishing the Lebanese, striking Hezbollah, its resistance, and its popular embrace in home Direct and at the general national level.

For these reasons, follow-up partisan circles believe that Washington and Tel Aviv will not offer Lebanon what it wants on a plate of gold. And the current conflictًOn the demarcation of borders and the extraction of oil is a new chapter of the confrontation and the ongoing conflict. For this reason, other options are being sought for Americans The Israelis do what they want, and it prevents Hezbollah from being able to do what it is working to implement and reach.

Is there a choice? else ?

what is it if was there؟

One of the experts specialized in following up on Israeli affairs says that through the contacts and research that took place inside the Zionist entity, there are three options for the enemy today the Israeli, Which:

First : Agreeing to what Lebanon demands in the demarcation negotiations. However, there are obstacles to that mainly related toً And mainly that it will be said that Israel has retreated and its will was broken before Nasrallah, which will give him potions of strength that he will use every day and in various cases. other, WhatIt leads to the transfer of the conflict with the so-called axis of resistance or resistance or the Iranian axis to me A new stage through which it is intended to target Israel more broadly,Gradual progress in the process of stopping its expansion at the Arab, European, Islamic and international levels.

Second: Not agreeing to what Lebanon is proposing and openly going to confrontation and war with Nasrallah, which puts Israel in front of a new type of challenges, especiallyً And the rule that you adopt in wars It will not be settled, and it is the one who usually fights in the midst of any war under the title “a war with guaranteed results, quick and at the lowest cost to it, especially at the level of its internal front.”

This means that any war that takes place is not guaranteed results for Israel due to the surprises it may entail, and it will not be able to control the period of its continuation after the July 2006 war, which lasted 33 days. In addition, and this is the most dangerous thing for Israel, as its internal front will witness tremors earth-shattering As it will be exposed in the targeting, destruction and killing of everything that may be exposed to Lebanon by Israel in this war.

The third option remains and is prevalent now and until notice else , It is related to delaying the start of work on gas extraction in a field Karish Until effective and effective alternatives and means are developed to prevent Hezbollah from carrying out what it threatens. Stopping or postponing gas extraction from a field Karish Now, at least, it guarantees Israel the continuation of gas extraction from the other eight fields, which were previously To Nasrullah Announcing that he will be targeted.

Therefore, the Israeli accounts, even if they are interested in starting work in the field Karish However, it is not guaranteed and at the same time it would harm the fields the other.

And of course Van The origin of this path is to wait for what the United States might resort to against Hezbollah, in a way that distracts it from what it has declared its intention to do, whether internally.ً In Lebanon, or otherwise, there are ways and means that Washington has the ability to work on, especially sinceA Mainly concerned with providing Oroya gassed as a result of the Ukrainian crisis and its continuationAs well as its explicit position not to harm with me The Zionist entity, which was announced by the US President on his recent visit to Tel Aviv.

Which options are indicated? closer to check?

The question is posed today, and the answer will not be long. It is only a few weeks, and the picture becomes clear and with it the events that it contains and bears.