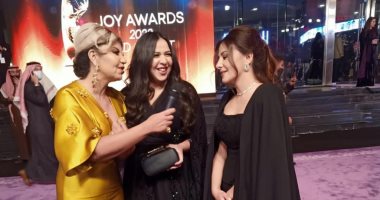 Actress Amy Samir Ghanem has overcome her sorrows after the death of her parents, the late stars Samir Ghanem and Dalal Abdel Aziz, as she attended a short time ago to the theater Bakr Al-Shadi Boulevard Riyadh Al-Nujoom, to attend the JOY AWARDS Awards, which is the Entertainment Makers Award in its second edition in Saudi Arabia, which is dedicated to the people of art, cinema and drama. Music, sports and Arab influencers.

The awards are presented by the General Entertainment Authority in the Kingdom of Saudi Arabia under the umbrella of the “Riyadh Season”, in a ceremony in which this year a constellation of Arab and international stars of art, cinema, drama and sports will participate, along with the most prominent entertainment makers and a group of invitees in this vital sector, in parallel with a group of press Media, social influencers and personalities.

The ceremony will witness a number of live artistic performances on the stage as part of an integrated scene of one of the largest artistic and entertainment events in the region.

The Entertainment Makers Awards ceremony is distinguished by the fact that the audience is the one who chooses the winners in various categories, through voting that allows the participant in the voting process to give his vote to the candidates he chooses himself in each of the categories classified within five disciplines: cinema, music, social influencers, sports and drama series.

While each discipline has a number of related awards, a participant can vote only once for each award. The voting phase for the nominated businesses and persons started on October 20 of last year and extended for a whole month.

Hysterical screaming filled the place for Soad Hosni.. in the most hot scene with Rushdi Abaza in a forbidden movie and the director did not care about her screaming and the hero continued his fun until the end..

Confidently move forward into the golden time of life. with help for the elderly – TheReporter.asia