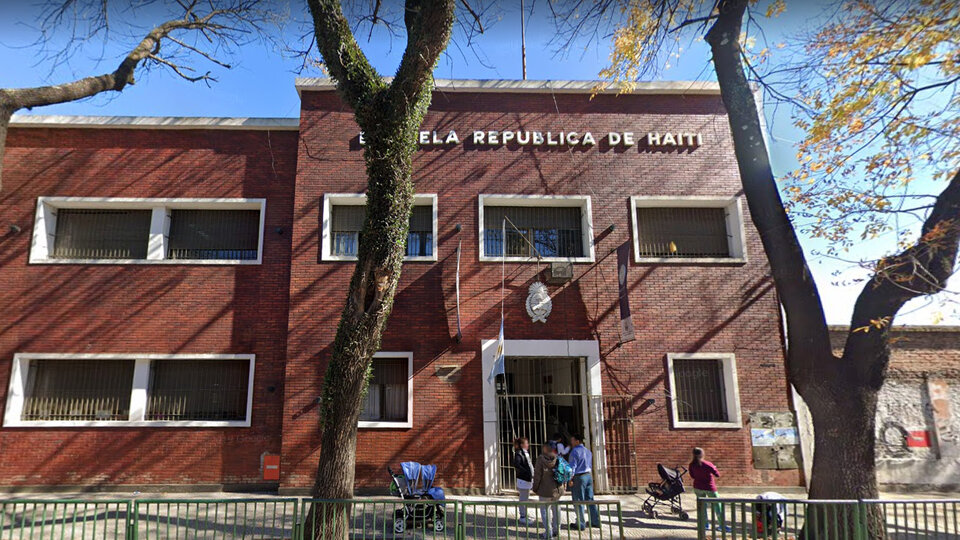 “We are denouncing a situation of great apathy on the part of the Government of the City of Buenos Aires. We are mourning the loss of one of our girls,” said a teacher from M., the 11-year-old girl who — like her family — was going through a situation of extreme vulnerability and who died on Monday.

M. was a student at the School No. 11 “Republic of Haiti”, Barracas. Her teachers point to the City Government as the main person responsible for the death, for not having intervened despite the fact that the teachers repeatedly warned about the situation of the girl and her family. They say that M. arrived at Penna Hospital on Monday the 15th, “when there was nothing else to do.”

On Friday, August 12, M. fell sick at school and her teachers quickly called SAME to help her. However, after an hour of waiting and after another call to the SAME, help did not arrive, so her family withdrew her from school and took her to the hospital on her own.

In the meantime, “the ambulance never came”sources from the school confirmed to this newspaper.

A history of vulnerability

M. had been a student at the school since 2017, when she started first grade. Previously, several of her siblings had been students in the same establishment and the teachers knew her family’s situation, so “in the first days of her admission to school, the intervention of the School Orientation Team (EOE) was requested. , due to the clear vulnerability of rights that the girl and her family were going through,” explained Your Family Galanteschool teacher, in dialogue with Page|12.

During the following two years, in 2018 and 2019, the family presented the medical certificate indicating that M. needed a “hypercaloric food booster”. In 2020, the EOE requested “urgently” the intervention of the Zonal Ombudsman; he reiterated the request in 2021, but it was not released to the family.

The school reiterated the request in 2022. However, “to date the school was never informed if there was any intervention of that body,” said the teacher.

“We are denouncing a situation of great negligence on the part of the Government of the City of Buenos Aires. We are lamenting the loss of one of our girls, one of our students. We believe that this could have been avoided because we took all the necessary actions to that this did not happen. We are sure that this was the fault of an absent State that has the political decision not to take care of our kidsGalante said.

The teachers affirm that for many years the schools in vulnerable neighborhoods have registered that girls and boys have serious problems of malnutrition, but that in any case they prefer to be prudent and wait for medical certification as to what caused the girl’s death. The autopsy was performed on Tuesday.

In the case of M., the teachers pointed out, everything “institutionally possible” was done from the school.

Upon consultation of Page 12, from the Buenos Aires Ministry of Education denied any responsibility of this portfolio in this case. “All the actions carried out by the support teams in this case at this school were appropriate, and there was a follow-up since the girl entered this institution,” they said.

The EOEs are made up of 3 or 4 people who are in charge of several schools and cannot cope with the number of cases that require their attention, the teachers explain. In addition, the professionals who work in them rotate all the time, so they cannot follow educational paths or get to know girls and boys.

“M.’s family lives in an extremely precarious situation with many economic and social difficulties, which generated pedagogical difficulties. But it is not the only case in which we ask the Government of (Horacio Rodríguez) Larreta to intervene and it does not give us an answer,” said the teacher.

Teachers point out that the situation in the neighborhoods in the south of the capital is alarming: girls and boys don’t have anything to eat, the food consists of a sandwich and a piece of fruit. In single-day schools like this one, half a glass of milk is distributed with cookies but only to those who attend classes. Families can only register at a neighborhood kitchen, which can deliver one meal a day, at a single time: each family must choose whether to eat at noon or at night.

“Nobody prepares you to tell a baby that you don’t have any more milk when he’s hungry. There are children who ask you two or three times for milk and you have to deny them, because there are no more”said Natalia González, who is a grade teacher at the school.

The violence of every day

Between the winter holidays and some absences of the girl, they led to a situation in which M. did not have the support that the school could usually provide to girls and boys, the teachers pointed out.

“We tried to give M a lunch before entering the classroom. Also, slippers, supplies and donations of different kinds from articulating with the organizations that work in the neighborhoods, but even so we did not arrive,” Gonzalez reviewed.

“One is always hoping that something will happen, that everything will be better. We didn’t think something like this could happen to us.”concluded the teacher Galante.

“We are afraid that this situation will repeat itself because we see the violence that these boys receive every day and we do everything possible, but the monster in front of us is enormous and today a girl took us out,” González lamented.

Paul FrancisSecretary of Labor Conditions and Environment, CYMAT, UTE, CTERAaffirmed that “for ten years” the union has been denouncing that there is a “Emptying in the protection system for children and adolescents”.

From the school they are organizing an educational caravan to the seat of the Buenos Aires Government, together with social organizations. It will leave on Monday the 22nd, at 5:00 p.m., from school 11 (Lafayette 1879), and will mobilize “for decent childhoods.”

JUBILE adjusts its revenue target to grow more than 15% after H1/65 growth of 31%, opening 2 new branches