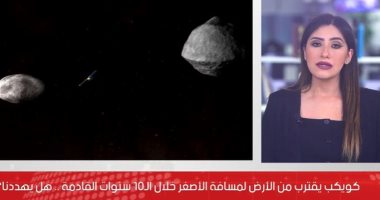 Special coverage conducted by the Seventh Day TV about the crossing of a newly discovered asteroid tomorrow, Tuesday, near the Earth, called 2022 CO6, with a diameter of 27 meters and moving at a speed of 11.6 kilometers per second, and it will be at the nearest distance of 224,625 kilometers at 10:57 am Cairo time and there is no danger of it colliding with a planet the earth.

The coverage stated that the asteroid comes within the list of near-Earth objects, which includes any asteroid whose orbit intersects with the Earth’s orbit, and these asteroids are closely monitored.

She explained that the asteroid 2022 CO6 is approximately the size of the asteroid that penetrated the sky of Russia in February 2013, with a diameter of 20 meters, and disintegration at a low altitude, as it was released from an asteroid in 2013, high energy that caused a shock wave in the sky; It led to the shattering of glass buildings and human injuries due to flying glass, and the arrival of small pieces of the remnants of that space rock to the surface of the Earth in the form of meteorites.

She indicated that she takes advantage of such opportunities to learn more about asteroids, such as the nature of their formation, as these bodies are like a time machine from the remnants of the formation of the solar system that retain many of the secrets of that era.

She explained that the approach of the asteroid 2022 CO6 on Tuesday, is the closest in the next 10 years.