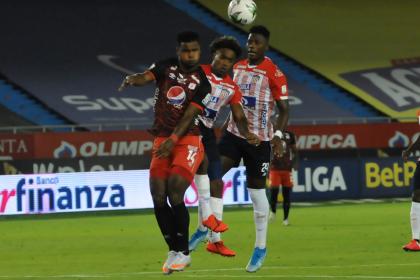 It is undeniable that América de Cali played an interesting game against Junior this Saturday at the Metropolitano, pressured him and controlled the ball, but the inexperience of two of his youths weighed heavily in two key plays of the commitment.

First, having disarranged Pablo Ortiz to place him on the left side, the expulsion of central Kevin Andrade in the 18th minute of the first half and the foul that Ortiz committed in one of the last actions of the match, which ended with the goal from a free kick of Sebastián Viera, changed the panorama of a match that promised a better result due to the initial presentation of the two-time Colombian champion, despite having three important losses in his starting lineup.

It is true that Junior is the best squad in the country, the most expensive and the one that brings together the greatest number of offensive variants, but the figures for the last three years indicate that the Valle del Cauca team, with less, has taken the measure. At least that’s how things were until the first half of the clash in the Atlantic capital.

FUTBOLRED analyzes the performance of the red cast against the ‘sharks’ in Barranquilla:

Two changes in defense: When it was believed that Jerson Malagón would go with Pablo Ortiz as defenders, Juan Cruz Real placed Kevin Andrade with the Bogotano and Ortiz left him as a left back, that is, two movements when it could have been only one. Then he had to rethink.

Andrade’s red: Incredible, and perhaps justified in his youth, that Kevin showed himself the red card just at 18 minutes, when he stepped on Teófilo Gutiérrez on his right leg, when the ball was on the other side, an unnecessary foul that when checked in the VAR by the referee Jorge Tabares gave him the arguments to leave the two-time Colombian champion with ten players.

Undoubtedly, from there, Junior took courage and generated at least two plays that could be goals, including the opening of the scoreboard through Miguel Ángel Borja.

Good first half: Despite the three substantial casualties, sufficiently known, América came out to pressure Junior and drowned him in his own field, to the point that the attack men used by Amaranto Perea were disconnected. Unfortunately, he did not mark the options that he generated and in the complement he was surpassed more by the shark momentum than by his better template.

Moreno, the different player: This youth showed a while ago that he has excellent conditions and in the Saturday game he became the headache of the ‘tiburona’ defense, scoring a goal after making a beautiful wall with Adrián Ramos, by stripping the ball from Didier Moreno. Far, the best red man against Junior.

A foul on the edge of the area with a great performer: Maybe Juan Cruz Real told his players to avoid committing infractions before 5.50 due to the presence in Junior of an excellent executor like Sebastián Viera, but Pablo Ortiz disobeyed him and when there were 3 minutes left in regulation time, he did so. Indeed, the Uruguayan goalkeeper stood in front of the ball, measured the barrier and with a tempered right hand over the human wall he scored a goal that kept the host team as the leader with 9 points.

Lack of efficiency in arrivals: It cannot be denied that America generated risky arrivals on Viera, but it was only able to realize that of Moreno, who missed another, like Luis Sánchez. The question is, when will the Peruvian Marco Aldaír Rodríguez begin to weigh in in the scarlet attack?