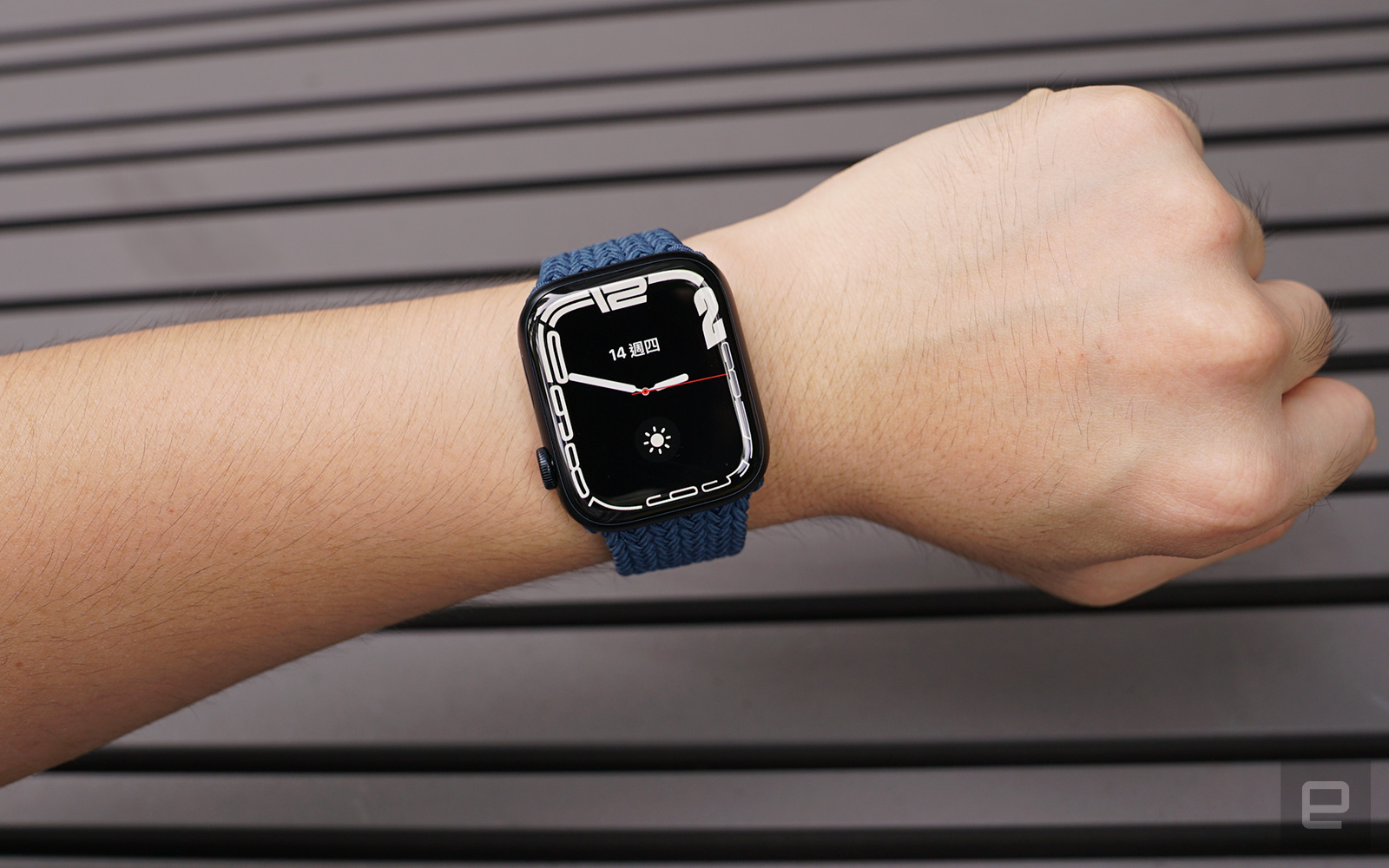 It’s been a long time since the smart watch was launched, don’t you know if everyone is willing to use it? Or do you still think that the smart watch means “it won’t last a day, and the charging is slow”, “the screen is so small and ugly”, “it’s just a mirrored mobile phone notification”?Then this time Apple Watch Series 7 The upgrade may make you look different, or at least it is a good choice for old users to replace them with new ones.

Coming to the 7th generation Apple Watch S7, the focus of this upgrade can be said to be focused on the inherent shortcomings of the above, especially the most important watchability of the watch, after all, it is “watch”. The body of Apple Watch S7 has risen again this time, providing 41mm and the 45mm version tested this time. It also adopts a new screen design, with a narrower 1.7mm frame to further increase the screen space. The display screen of AW S7 is 20% larger than that of S6.

So what is the use of the 20% extra space? In fact, when you touch the screen, you can clearly feel that the space where your fingers can slide on the screen of AW S7 has increased, and it is easier to press the password to unlock and the number keys of the computer, even when reading messages. Show a few more sentences. In this way, users will be more comfortable when viewing notifications and media content on the AW S7, and operating various functions. There is no need to close their eyes or press the wrong keys because they are afraid that their fingers are too thick.

In other words, the LTPO OLED always bright Retina display of AW S7 has also been improved. For example, the brightness during AOD has increased by 70% compared to the previous generation, and the content will look clearer, so there is no need to just look at the time. Just wake up the screen completely. Then there is a small change in the screen glass, which actually makes the AW S7 look more sophisticated. Apple this time allows the content of the screen to be refracted through the edge of the glass, creating a feeling of being close to or even overflowing, making the cold electronic products a bit of a boutique ingenuity.

Of course, this overflow effect still needs to have a specific full-board content to be more prominent, so Apple designed a new surface called “Outline” for Series 7, placing the dial numbers close to the edge of the screen, and there will be enlarged animations. The effect highlights the feeling of overflow. This animation effect is not messy, you can see that the largest number is actually the number corresponding to the hour hand. Apple also has another new surface exclusively for S7, the “two-line combination”, which places two larger complex functions on the screen, allowing users to see a wealth of information at a glance. As for the editor himself, I prefer the simplicity of the “contour” surface. Finally, it is possible to upgrade the “portrait mode” surface that will be available in watchOS 8, which will turn photos taken in portrait mode on the iPhone into a surface.

Friends who have bold assumptions, guess right. The editor mentioned above how Apple used the new large screen to make the display effect of the AW S7 fuller. Third-party developers actually need to follow up on their own. When you randomly open NBA, Yahoo News, Telegram and other apps, the content is not optimized for the new big screen for the time being, and you will obviously see a blank (black) frame around it.The situation is like iPad mini 6th generationSimilar, it depends on when the developer updates the watchOS app.

The large screen can display more content, which is naturally more convenient for input. With the gradual maturity of watchOS, many communication tools can reply directly on the Apple Watch. In the past, the editor used its voice input method because the recognition success rate was very high. But now the Apple Watch Series 7 has a larger screen, and the space for handwriting has become larger, making it easier to write. Some characters that cannot be recognized by the voice input method can also be input like this.

What’s even better is that S7 will actually introduce a complete QWERTY keyboard, and there is a sliding input function, which allows users to enter text quietly and quickly when it is inconvenient to speak. It is a pity that the current QWERTY keyboard of watchOS only has English and Mandarin Pinyin, and the output of the latter is only simplified Chinese. For editors who use traditional characters, this new feature does not seem to be very practical? Not necessarily, because when communicating with some friends, they still use English. I believe many Hong Kong friends usually communicate in this way, right? right?

The last part is the battery life. In fact, the editor has a lot of years of using Apple Watch, and has long cultivated the habit of charging this smart watch in a day or two. Of course, sometimes I forget to charge it. If I only found out that I picked up a dead watch when I went out, I would be really angry. So Apple has also increased the charging speed of the S7 this time. With the USB-C magnetic charger that comes with the package, you can enjoy 45 minutes, from 0% to 80% of the battery, and the cost is still a little longer. of.

In actual use, the upgrade of Apple Watch Series 7 this time is practical, because the large screen and fast charging that most directly affect daily use are all sensible improvements and can be experienced without too much time and effort. element. Of course, AW S7 and watchOS 8 also have some new sports tracking functions. The editor was unable to include them in this hands-on game due to time constraints. Please look forward to a more detailed evaluation!