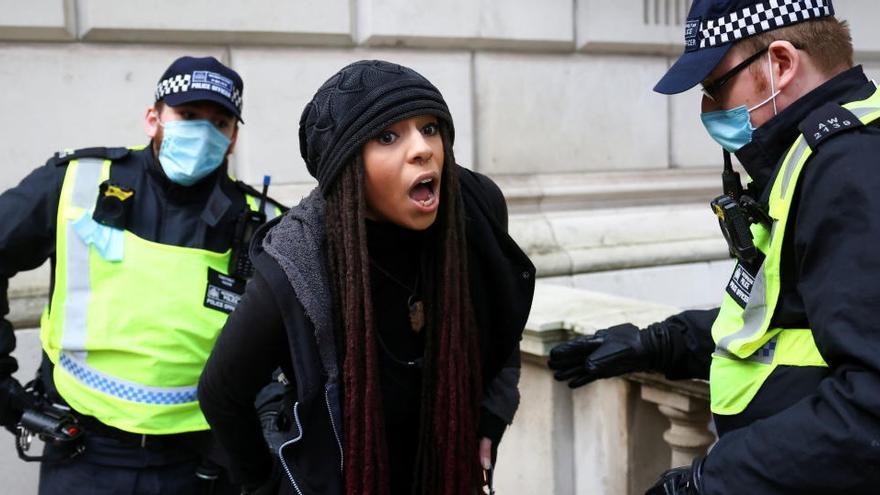 Two officers arrest a woman in London in a denial demonstration.
Reuters

Anti-lockdown activists This Saturday caused some chaotic scenes in the center of London, in a demonstration in which the Metropolitan Police (Met) confirmed the arrest of some 60 people for “various crimes”.

The forces of order had to intervene among those gathered, many of whom were not wearing masks, convened by the group “Save our Rights UK”.

That organization communicated on Twitter at the last minute a change in the meeting point, initially planned for King’s Cross and finally in Marble Arch.

Shortly before 15:00 GMT, officers had arrested some 60 individuals, while other activists chanted chants of “Freedom!” and they were marching on a road parallel to the commercial Oxford Street.

“These arrests are due to several different crimes, including violating restrictions due to the coronavirus,” a police spokesman told local media.

The body anticipated that that number of arrests “will increase” and I continue to urge those gathered to go home.

Met agents walked alongside the noisy protesters, many of whom carried banners with messages such as: “Stop controlling us,” “No more lockdowns,” “Throw away the masks“or” NO to mandatory masks “.

As documented in several videos posted on social networks, some policemen heavily protected with helmets had to approach central places in the capital, such as Oxford Circus, Carnaby Street and Regents Street to intervene in the march.