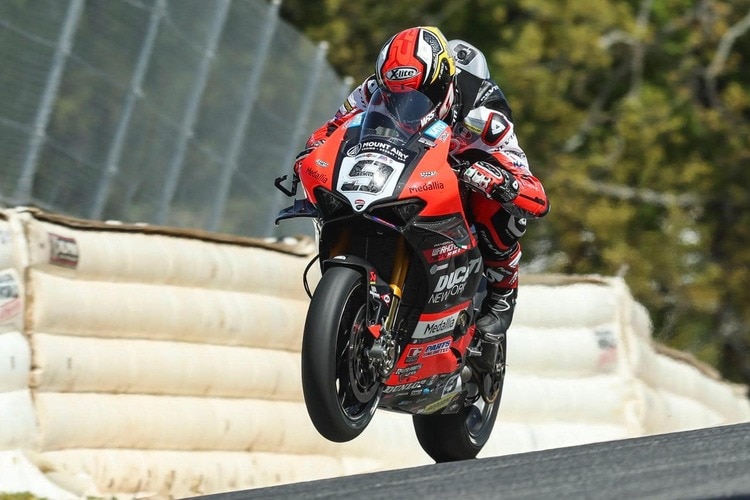 Former MotoGP rider Danilo Petrucci secured his third win of the season in the MotoAmerica Superbike class at Road Atlanta. In Race 2, however, he watched his Panigale V4R go up in smoke.

After the start of the MotoAmerica Superbikes season at the Circuit of The Americas two weeks ago, the second event of the year took place in Atlanta last weekend. Important points were at stake for the drivers and teams on the 4.1 km long Road Atlanta. Ducati rider Danilo Petrucci arrived at the Atlanta event as the leader and was keen to prove he could win at a track that was new to him.

In Saturday’s qualifying it was previous season’s champion, Yamaha’s Jake Gagne, who set the fastest lap time. The American set a new course record around the spectacular course in 1:23.407 minutes and was 0.060 seconds faster than Petrucci. The Italian fought his way into 2nd place on the grid, while Gagne’s teammate Cameron Petersen from South Africa was 3rd.

The first race on Saturday afternoon started in the spirit of defending champion Gagne. The 29-year-old took the lead and tried to break away at the top with his terrific rhythm that brought him 17 wins last year. But in round 6 the dream was over. The Yamaha rider crashed out at Turn 5 and had to watch as Petrucci, just a second behind him, claimed his third win of the season. Mathew Scholtz (Yamaha) and Suzuki driver Jake Lewis crossed the finish line behind “Petrux”. Ex-GP rider Hector Barbera finished fourth on his BMW M 1000 RR.

The second run on Sunday was significantly more chaotic. After the start of the race, Jeremy Coffey (Suzuki) crashed and the race had to be stopped. When the second attempt was in full swing, the TV truck went on strike. The entire transmission was interrupted because there was no power in the control room.

The third attempt at race 2 went according to plan, but ex-MotoGP rider Danilo Petrucci didn’t get far. His Ducati Panigale V4R threw a spanner in the works for the 31-year-old when the engine gave up on the first lap. This gave Gagne a clear path to his first victory in 2022. After a technical defect and 3rd place in Austin and a crash in the first Atlanta race, it was the Yamaha star’s first victory. Since Mathew Scholtz didn’t see the checkered flag either (a fall), Gagne was able to make up a lot of points in the overall standings. Cameron Petersen provided a Yamaha one-two, with Kyle Wyman third on the podium as PJ Jacobsen’s stand-in.

In the overall standings, Petrucci leads with 75 points ahead of Scholtz, who has 60 points to his credit. Cameron Petersen is third with 49 points, four points ahead of Barbera in fourth. Richie Escalante is the highest placed Suzuki rider ahead of Gagne who has 41 points so far and is sixth.

Deaths, including a child, in a migrant boat sinking off the coast of Lebanon