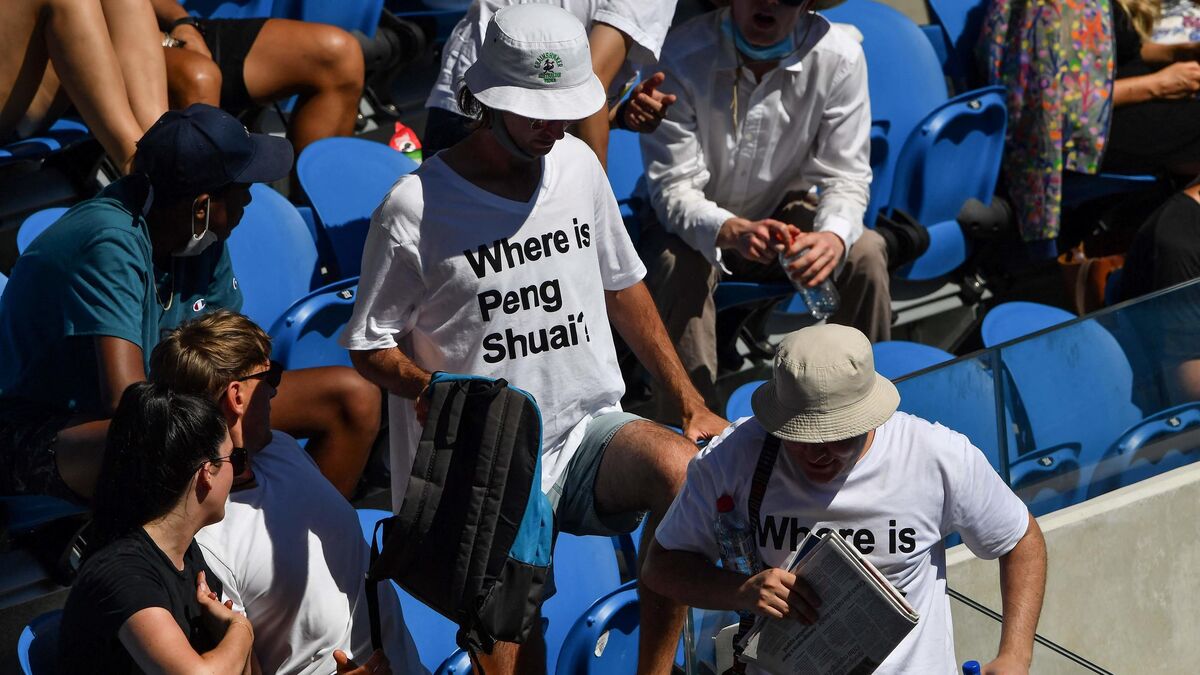 Australian Open spectators can bring out T-shirts stamped with this question – “Where is Peng Shuai?” – which bothers the Chinese authorities so much. After creating controversy on Sunday by banning these black-on-white flocked t-shirts displayed in the public, on the grounds that the Australian Open “does not allow political clothing, banners or signs”, the organization of the tennis tournament reconsiders this Tuesday on its decision.

“Yes”, she says, the t-shirts questioning the fate of the 36-year-old Chinese tennis player, who disappeared from the radar in November after her accusations of rape against a former senior leader of the country, are again authorized, provided that those who wear them “do not arrive as a hostile mob to sow disorder but that they are peaceful,” Open boss Craig Tiley said on Tuesday, adding that security officers will judge on a case-by-case basis.

On Sunday, Open organizers sparked controversy by asking fans to remove their t-shirts. The American of Czech origin Martina Navratilova, tennis legend with her 18 Grand Slam titles (in singles), denounced a “pathetic” decision on Twitter.

“There have been misunderstandings for some people who are not here and do not really know the big picture, judge Craig Tiley on Tuesday. The situation in the past two days is that some people have come with a banner on two big poles and we cannot allow that. If you’re coming to watch the tennis that’s fine, but ultimately we can’t allow anyone to cause a disturbance. »

The about-face comes as local media quoted human rights experts as saying Tennis Australia’s stance could be illegal. “There seems to be no valid reason to ask a participant to remove a T-shirt that highlights a human rights problem,” lawyer Michael Stanton told The newspaper. Age.

In response to the organisers’ ban, an Australian human rights activist managed to raise more than 14,000 Australian dollars (more than 9,000 euros) on the GoFundMe platform in order to print the same t-shirts and distribute them to spectators ahead of the final of the women’s tournament.

The pressure on the organizers was also maintained by the Australian government. “It’s very worrying and I think we should talk about these issues,” Defense Minister Peter Dutton told Sky News on Tuesday, encouraging “not just celebrities but also tennis organizations, including Tennis Australia”, to speak.

“We don’t want to drag sport into the realm of politics, but it’s not a political issue, it’s a human rights issue regarding the treatment of a young woman who claims to have been sexually assaulted “, he added.

Former world doubles number one Peng Shuai is missing from Melbourne amid fears for her well-being after she posted a lengthy post on Chinese social media Weibo in November in which she accused former Deputy Prime Minister Zhang Gaoli, 40 years her senior, of “forced” sex during a relationship that lasted several years. China very quickly blocked any reference to this message, and it then did not appear in public for almost three weeks.

Her subsequent public appearances have not put an end to concerns over the 36-year-old missing out on the Australian Open. The WTA has been hailed for its firm support for the player, going so far as to suspend its tournaments in China. Players continued to inquire directly about Peng in order to be reassured about his safety.

Craig Tiley reiterated that the organization’s “primary concern” was “Peng Shuai’s well-being”. “We have staff in China and we used our resources to help locate her early on. Since then, she has come forward and made statements, ”he defended himself. “We encourage him to have direct conversations,” he added. “The most appropriate people to do that are the WTA.”