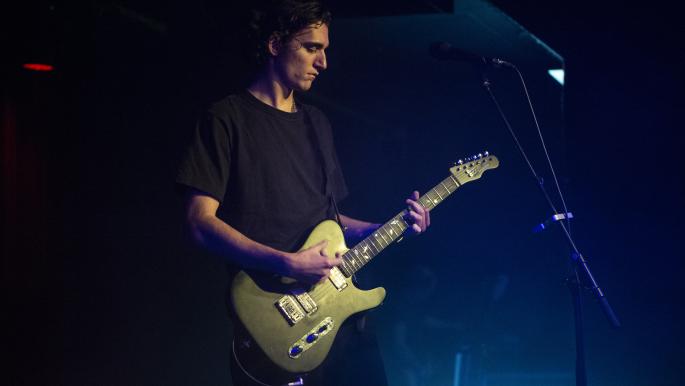 The rising Belgian singer, Tamino (1996), announced the imminent release of his second album, “Sahar”, which is scheduled to be released early next fall, in a tour that includes United States of America and Canada. Tamino chose an Arabic name for his new album, as he did on his first album, “Amir”, released in 2018. The latter was ranked among the top ten albums in Europe at the time, according to a poll conducted by the British newspaper, The Independent. The Arabic character, here, is not limited to the name of the album only; This time, all the songs of the new album have an oriental feel, thanks to the use of a group of Arab musicians residing in Brussels, a group whose members are mostly immigrants and refugees, from Syria and Iraq.
Tamino’s voice, first heard in front of a Belgian audience in 2016, was something deep and melancholy; His songs were characterized by a mixture of sadness and magic, due to his reliance on multiple vocal layers; A deep layer like wailing, followed by another low and confident one. There is also a remarkable blend of oriental rhythms and electronic tones.
Anyone who knows Tamino will immediately realize where this powerful and tender performance came from; The rising Belgian singer, who sings in English, is the grandson of The late Egyptian singer Muharram Fouad, who starred in the Arab world in the sixties. Tamino’s father, Tarek Muharram Fouad, immigrated to Belgium in the 1990s, where the young singer grew up, a name that his Belgian mother chose for him.

Tamino discovered, early on, he says, this connection with one of the most prominent singers of the Arab world; His father was always talking about him, and his songs were frequent in his home when he was young, and they still fascinate him with their strength and high musical intensity. Tamino says that his tendency to sing was not a conscious decision, it happened naturally, but he sometimes wonders about the influence of genes, and the impact of this atmosphere in which he grew up.
The Belgian-Egyptian singer continues to draw inspiration from the spirit of oriental music, mixing it with rock music in particular, which distinguished his first album, “The Prince”, which was highly acclaimed by the European audience.

In his new album, Tamino relies on the tunes of the oud, which he recently learned to play at the hands of a Syrian musician. The oud is a pivotal instrument in all the songs that he will present in his new release, and he also had a magical effect in choosing the lyrics, according to the young singer.