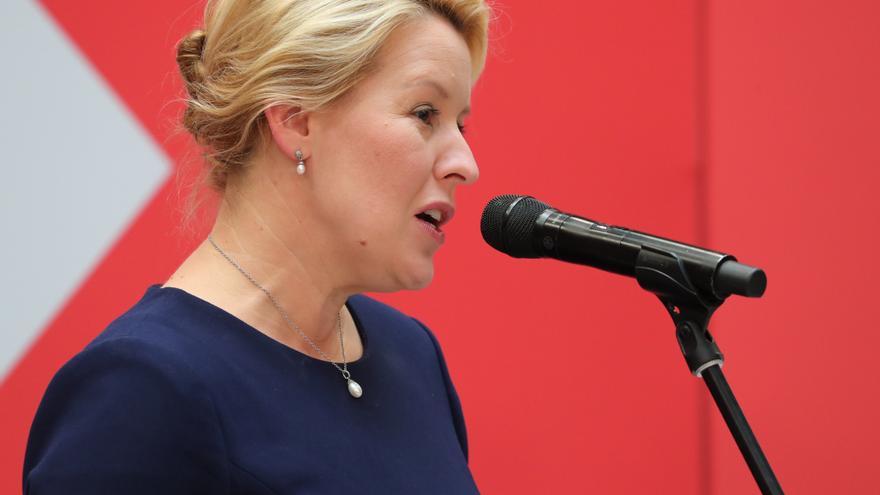 The Social Democratic candidate to lead the next government of the city-state of Berlin, Franziska Giffey, assured this Monday that will respect the favorable result of the consultation to expropriate large real estate companies held this Sunday, although he reiterated his position against such a measure.

Giffey pointed out that already during the electoral campaign he clearly spoke out against the expropriation or socialization of more than 240,000 properties, as proposed by the citizens’ initiative “Expropriate Deutsche Wohnen & Co”, considering that “it is not the correct way to solve the issue of affordable housing”.

In a press conference with the Social Democratic candidate for the Chancellery, the German Finance Minister Olaf Scholz, Giffey pointed out, however, that in the face of a consultation with a positive result, the obligation is to proceed with “responsibility and respect”, that is to say, “to put in place the steps that must be taken now”.

However, he stressed, a “very, very important assessment” needs to be made about “legitimacy, constitutionality and economic viability”, as well as “the consequences for the city-state of Berlin.”

And with this consideration, he added, it will be necessary to decide at the end “what can really be done” and how to proceed with this “appeal directed at politics”, since what has not been done in this consultation is to vote on a project law, he remembered.

In Giffey’s opinion, the “essential” to solve the problem is to build a new homeIn addition to protecting tenants with moderate rents.

Stressed that the city’s goal is to build 20,000 new homes a year, which naturally includes affordable housing, he said, in line with what Scholz is proposing at the federal level, he added.

“We have to solve the great social question of affordable housing” and that translates, he specified, into the construction of new housing on a certain scale and into a strong alliance between municipal companies and cooperatives, but also with private companies.

Only then will a solution be possible, he said.

Thus, 56.4% of voters were in favor – as opposed to 39.0% against – the Senate (Executive) drafting a bill to “socialize more than 240,000 properties” belonging to “large companies for-profit real estate companies “that own more than 3,000 homes, which would become public property.

At the same time, the necessary minimum number of votes in favor was reached, established in a quarter of the almost 2.5 million Berliners with the right to vote, although the result of this referendum is not binding as there has been no consultation on a bill. concrete.