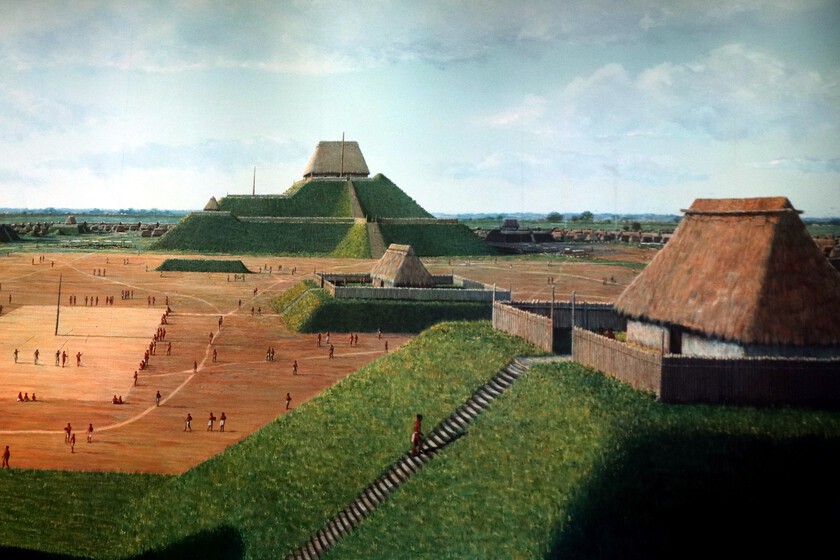 In the vicinity of St. Louis, in the neighboring state of Illinois, are the remains of one of the most important cities of pre-Columbian North America: Cahokia. And despite this, a great unknown.

A green pyramid.
Who visits this archaeological site today will not find ruins but green meadows and several hills, including one in the shape of a pyramid with a plain on top that stands out from the terrain. Apart from the singularity of the terrain, nothing would make us think that the place housed what could be the largest pre-Columbian city north of the Rio Grande.

An untold story.
The city was inhabited by what is now known as culture of the Mississippi, which is considered the main pre-Columbian civilization in what is now the United States. The origins of this civilization would be around the 8th century. The oldest archaeological remains found in the vicinity of Cahokia date from this time.

The inhabitants of the region began to cultivate maize during the following centuries and towards the middle of the 11th century Cahokia settlement started to be built. This was a time of expansion in which many inhabitants moved from surrounding settlements to the city.

The 12th century was Cahokia’s golden age. The main one of the hills that are still preserved dates from this time, in which the city also had a walled enclosure with a palisade. Inside this castro the main buildings of the city would be found.

The decline.
Between the years 1200 and 1400 the settlement lost population until it was abandoned, although during the 13th century Cahokia remained an important settlement and center of commerce in the region, only to continue its decline during the 14th century.

During the following centuries the area was inhabited sporadically, first by the Oneota culture and later by the Illinois Confederacy. The name Cahokia comes precisely from the group of this confederation that inhabited the area.

The former, for example, give us clues about the religion of its inhabitants (or at least make us intuit that they had one). The latter, which include a site with nearly 2,000 deer carcasses, allow archaeologists to speculate on massive events.

World Heritage.
The archaeological site is included in the world heritage list created by UNESCO and therefore protected. A small interpretation center allows visitors to learn more about urban life in which archaeologists have been able to investigate. Despite this, the city is a true unknown.

We still have much to learn from a region of the world that has lost an important part of its history. Reconstructing it is an arduous task, in which different branches of science can help. For now it is only possible to get to know these little stories one by one. It’s not little.

Chonburi pub fire! The police took Sia Bi, the owner of Mountain B, and put him in custody.