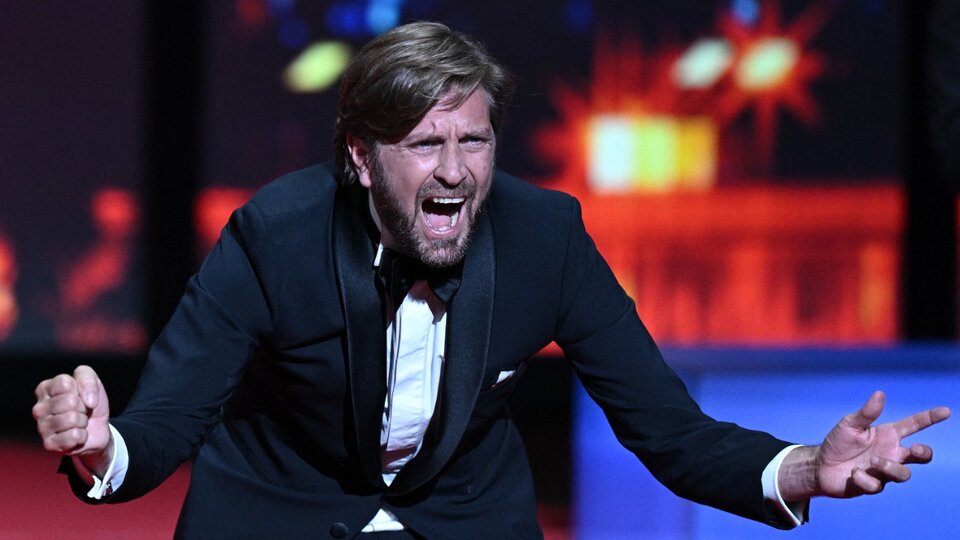 the swedish filmmaker Ruben Östlund entered this Saturday the privileged circle -increasingly less exclusive- of the directors who have two Palms d’Or at the Cannes Film Festival. The first was for The Square (2017) and now he has just won it again for Triangle of Sadnesshis new social satire, with even greater doses of cynicism and misanthropy than those of his previous film.

yes in The Square the Swedish charged –a bit like the cinema of the Argentines Cohn & Duprat- against the world of art, now in triangle of sadness (the title alludes to those wrinkles that usually appear on the forehead) is installed in the field of fashion and luxury cruises, where everything is appearance and money. Nothing very different from what happens right here in Cannes, where his film was greeted with a round of applause, as if that world were alien.

extremely generous, the jury chaired by the French actor Vincent Lindon handed out prizes as if they were candy at the closing ceremony of the 75th anniversary edition of the Cannes Film Festival. There were two awards equally (see full list below) and a special prize for the Dardenne brothers, among other Cannes regulars who were awarded again, such as the Korean director Park Chan-wook.

Beyond the winners, which is always a source of controversy, a balance of the 75th anniversary edition does not leave a positive balance for the Cannes Festival, which seems to need a breath of new life, of fresh air in all its sections. It is true that there were very high points in the official competition, with Crimes of the Futureby David Cronenberga filmmaker who, being true to himself, always seems to be reinventing himself, and the same with Tori and Lokitaby the brothers Luc and Jean Pierre Dardennewho, like Cronenberg, looked for inspiration in the beginnings of their own cinema (their new film has a lot in common with The promisefrom 1996, his first film with international repercussion).

It is also true that it was a bold gesture by the festival to program such a risky film by a veteran as el polaco Jerzy Skolimowski, Eo, that aspires to the impossible: to return to an unrepeatable masterpiece of universal cinema, such as Random Baltazar (1965), by Robert Bresson. For its part, Romanian Cristian Mungiu also demonstrated with R.M.N., which continues to have the ability to put the society of its country in front of a mirror whose image not everyone would like to see. But it must also be said that this “promising” character that the programming had a priori, due to the quantity and quality of the filmmakers summoned, was giving way to a certain disappointment, because their films in the 2022 edition were not superior or equivalent to those of his previous work.

It is the case of Armageddon Timefrom the American James Graywhich had much more powerful films here in the Cannes competition than this autobiographical look at his own past, which has nothing nostalgic or condescending (on the contrary), but which still makes the dramatic density of The Yards (2000), The owners of the night (2007) o Lovers (2008), which were not always recognized as they deserved.

The same thing happens with Korean Park Chan-wook (Decision to Leave), the Italian Mario Martone (Nostalgia) and French Arnaud Desplechin (Sibling). All of them were before in Cannes disputing the Palme d’Or with more valuable films, particularly Desplechin, who has been bustling the Croisette almost film by film since The Sentinel (1992), and that gives the impression of needing a break. With Broker (Drug dealer), the Japanese Kore-eda Hirokazualso takes a step back from a family affairthe film with which he won the 2018 Palme d’Or. Made entirely in Korea and with a cast headed by Song Kang Ho (the iconic protagonist of The Host y Parasite, now winner of the award for best actor for Broker)this new incursion of the Japanese director outside his country (the previous one had been the French production The truthstarring Catherine Deneuve and Juliette Binoche) reformulates the topics of his previous work, essentially the formation of a surrogate family instead of a blood family, but he does so not without some calculation, appealing to a sentimentality to which he did not usually condescend.

Likewise, the most resounding misstep in the official competition was that of the French director Claire Denniswith what is certainly his only completely unsuccessful film of an otherwise exemplary career: Stars at Noon. Set in a Nicaragua that seems like a poor reconstruction of what Hollywood understands Latin America to be, Denis’s film – the second he shoots in English after High Life (2018)- he doesn’t know what he wants to tell, a Graham Greene-style espionage movie or a desperate love story of a couple (British Joe Alwyn, American Margaret Qualley) who don’t even give the impression that they are amen.

The Catalan excursion Albert Serra to French Polynesia, with Pacifiction, is much more successful, with an atmosphere of decadence embodied in that representative of the French government (Benoît Magimel) who tries to maintain the status quo of the colonial enclave while investigating with concern the suspicion of a new, possible nuclear test in an atoll near. In the deliberate drift to which he abandons his character, Serra reveals, however, a certain laziness that was not the case in his two stupendous, extremely rigorous previous films at Cannes, The death of Louis XIV (2016) y Freedomwinner of a special jury prize in the Un Certain Regard 2019 section.

Perhaps the highest point of the official selection was in the new Cannes Premiere section, thanks to Night exterior, a miniseries produced for RAI and inspired by the kidnapping and murder of the legendary Christian Democracy leader Aldo Moro. The veteran’s new creation Marco Bellocchio (82 years) is nothing more than a six-hour film, such is its dramatic and political complexity, at the opposite of the lightness that platforms usually demand. And to which she surrendered, it must be said, Frenchman Olivier Assayas with his HBO version of Irma Vep –also at Cannes Premiere- luck of recycling in miniseries format of his famous 1996 film.

The Directors’ Fortnightan unofficial parallel section, also had moments of great cinema with L’envol (The Flight)a French production directed by the Neapolitan Pietro Marcello, A nice morningby the French Mia Hansen-Love (who could well have been in the Official Competition) and Pamfirnotable feature debut by Ukrainian Dmytro Sukholytkyy-Sobchuk, a name that will have to be learned to spell, because he seems like a director who has a great future ahead of him.

To read more on this topic:

The attraction of Roland-Garros – At 19, Carlos Alcaraz has only the sky for limit