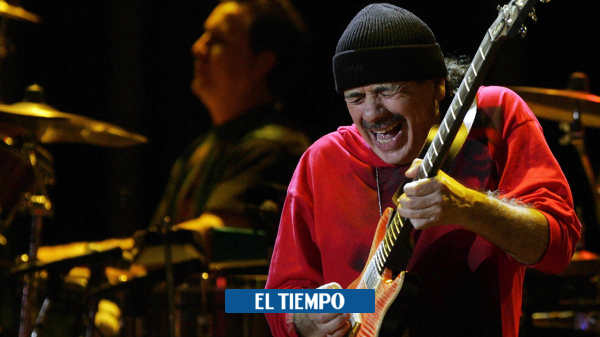 The legendary Mexican guitarist, Carlos Santana, fainted at a concert in Michigan, United States. According to the first reports, the musician collapsed after an hour of show and, around 10 pm, medical personnel went on stage and transferred him to a hospital.

In the video of the moment, the musician is seen drinking some water while sitting next to his wife, Cindy Blackman, and accompanied by the rest of his team.

No further information on Santana’s condition has been released, however authorities asked fans who attended the concert to pray for her health.

Carlos Santana was born on July 20, 1947 in a town in Jalisco, Mexico. He is a pioneer in fusing Latin rhythms with the rock genre in the Santana group, which he founded in 1966.

Since then, his figure and his music have received all possible recognition, appearing, among others, in the Rock and Roll Hall of Fame and in the list of the 100 best guitarists in history, drawn up by Rolling Stones magazine.

The band’s first full-length album, titled ‘Santana’, peaked at number four on the best-seller charts thanks to tracks like ‘Soul Sacrifice’, ‘Evil Ways’, ‘Waiting’ and ‘Jingo’.

In 1970, the album ‘Abraxas’ came to be in the first place of popularity, thanks to the participation of Tito Puente in the song ‘Oye qué va’.

Among his most outstanding works is the recording of ‘Supernatural’, in 1999, which won numerous Grammy awards and came back to occupy the first place in the United States popularity charts. It includes collaborations with Maná in ‘Corazón espinado’, in addition to Rob Thomas, Eric Clapton, Lauryn Hill, among others.

In 1996, he received the Billboard Century Award for Creative Achievement, and in 1997 he was named Latin Music Legend of the Year by the Chicano Music Awards.