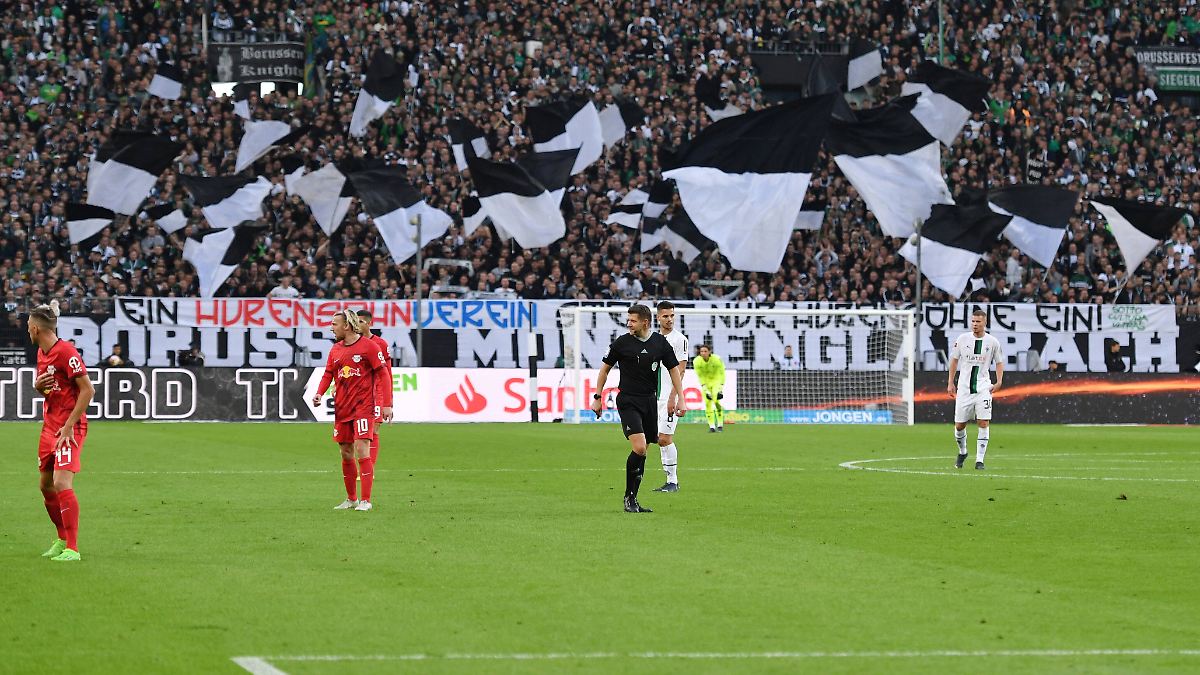 In Mönchengladbach, the referee ordered the removal of a banner heavily insulting the opponent from Leipzig. Fans criticize him for it, while both the Gladbachers themselves and the referee instructor of the DFB find the procedure correct. For good reasons.

It’s been a good two and a half years since several Bundesliga games were interrupted by the referees because banners in the stands were seen in a derogatory manner aimed at Dietmar Hopp, the patron of TSG 1899 Hoffenheim. Since the referees were required to apply the so-called three-stage plan – which is to be implemented in the event of racist and other discriminatory incidents in the stadium and includes the stages of interruption, going to the dressing room and abandoning the game – in such a case, they stopped the continuation of the matches in question until the banners and banners were removed.

This caused a lot of criticism, especially in the organized fan scene, and finally the DFB specified its instructions in a handout: The application of this plan is also possible in the case of personified threats of violence, but not in the case of insults, defamation, abuse or slander that constitute discrimination not fulfill. Among the examples of such non-discriminatory statements is, despite its misogynistic character, the invective “Hurensohn”, with which Hopp was honored several times on banners in spring 2020. Regardless of the three-stage plan, a later sanction under sports law is possible, according to the DFB.

When the game between Borussia Mönchengladbach and RB Leipzig (3-0) took place on Saturday evening, parts of the hosts’ annexe verbally targeted the former Gladbach players Marco Rose and Max Eberl. Rose has recently been a trainer in Leipzig, Eberl is expected to be the new sports director there. Both were verbally abused and insulted on posters and with shouts during the game. When, after 40 minutes, a large banner was presented in the north stand of the Borussia Park with the inscription “A son-of-a-bitch club only hires sons of bitches”, referee Patrick Ittrich intervened: He arranged for the fourth official to make a stadium announcement, in which the fans were asked to remove the banner. Otherwise the game may be interrupted.

The game continued after the announcement, the banner disappeared shortly afterwards. The Gladbach coach Daniel Farke thought the banner was “not okay”, and his statement was without a doubt primarily for Eberl and Rose. Christoph Kramer, a Borussia player, even spoke of an “absolute mess”. Although he is “not the biggest fan of RB Leipzig as a football romantic”, but “hate has no place on the sports field, in our club, in the world in which we live,” he said. Kramer therefore found Ittrich’s approach “completely correct”. Many fans saw it differently, not just Gladbachers, who accused the referee on social networks of ignoring the DFB guidelines and exceeding his competencies.

Ittrich himself said to the broadcaster Sky: “I have a relatively short leash on banners where insults or abuse can be seen. I think this legal vacuum, both on the Internet and in the stadium, must be prevented, but it must be clear be taken.” It’s “kids in the stadium” and “people who want to watch football”. Using football to “trumpet really insulting and abusive statements – that has to stop,” said the 43-year-old. At the same time, he emphasized that the three-stage plan must be adhered to, but the funds must also be proportionate.

But did Patrick Ittrich fall back on this plan at all? His approach was more of a preliminary stage, as Lutz Wagner, the DFB’s referee instructor, explained in an interview with Deutschlandfunk: “First of all, he demanded that the banner be removed, and if not, then he will interrupt the game.” It is crucial that the tools that the referee has “are used with a sense of proportion,” said Wagner. These tools not only include the three-stage plan. The referee “gave the law enforcement officers the opportunity to remove the banner.” That also happened. “He did the right thing with that, and he did it very sensitively.”

It’s not just the letters of the rules and instructions that are important, but “also a bit of common sense,” Wagner continued. Nobody wants to see statements like the one on the banner, “Something like that doesn’t belong on the pitch.” You can’t always justify everything with emotions. Regarding the question of where to draw the line, the former Bundesliga referee explained that it also depends in part on the circumstances and the situation at hand, on “the way it is brought about”, as well as on the opinion and at the discretion of the referee. This means, for example: In an already heated atmosphere, certain insults, deprecation and provocations can have other, more serious consequences than in a game that is going quietly.

The set of rules is also on Ittrich’s side

Patrick Ittrich rightly received a lot of praise for his empathetic and prudent game management in this explosive and stressed game. His de-escalation measures on the field worked very well, and through his communication with the players he always took the hectic out of the encounter. It was also fitting to arrange for the removal of a banner that contained potential for escalation. Incidentally, Ittrich had the technical authority to do this, regardless of the three-stage plan – which is not found in the football rules, but is a supplementary instruction: The rules give the referee the opportunity to take appropriate measures if the game is impaired in various ways from outside or threatened to become. This ailment can be Pyrotechnics and Throwables, as well as Offensive Banners.

In other words: The DFB’s clarifications on the three-stage plan state that “son of a bitch” is not discrimination that requires an immediate game stoppage as the first stage. But that doesn’t mean that this insult – like other slurs from viewers – always and automatically goes unpunished during a game. If the Referee decides that intervention is required, he can act accordingly. It might also be a good idea to have a serious discussion about whether insults that would have legal consequences in any other context should continue to be treated as harmless folklore in football stadiums. Patrick Ittrich initiated this debate.

Rafel Araneda: surprised with a sad wish on his birthday

Vaccines save lives: the campaign of Argentine pediatricians to immunize all children and adolescents