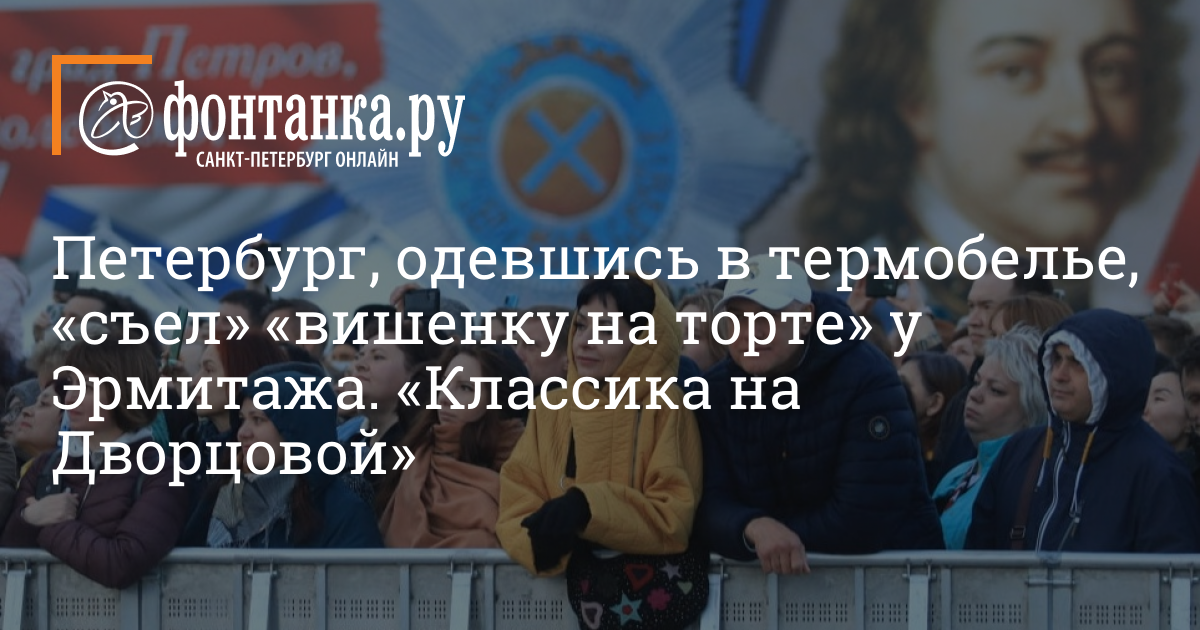 Vice-Governor of St. Petersburg Boris Piotrovsky, who came to the concert “Classics on Dvortsovaya”, called the evening concert near the walls of the Hermitage “Cherry on the cake”. According to him, among one and a half hundred events dedicated to the 319th anniversary of the founding of the city, this is the “Petersburg way” to congratulate residents on the holiday.

Following the welcoming polonaise from The Sleeping Beauty by Pyotr Tchaikovsky, to which the ballet dancers paraded, carrying outlandish hairstyles with sailboats on their heads, the main guest star of the evening, the Italian singer Vittorio Grigolo, appeared on the stage. His light but juicy performance of Rossini’s “Dance” warmed the wrapping spectators with the energy of the southern sun.

Speaking of the cold: before the concert, conductor Denis Vlasenko, who stood at the podium of the Philharmonic Academic Symphony Orchestra this evening, admitted that, as an experienced one, he warmed himself with thermal underwear under his tailcoat, and his ski socks warmed his legs. And he is much more excited about the choir and orchestra, which cannot move as much as the conductor, and “freeze first”.

But there was no need to worry about the soloists Maria Aleida and Yulia Suleimanov – the stage costumes of the girls, whose voices merged into a perfect airy duet (Norma and Adalgisa from Bellini’s Norma), included fur capes on their shoulders.

But the soloist of the Mariinsky bass Ildar Abdrazakov truly ignited the hearts of the audience loyal to him, charmingly addressing the audience with the performance of Don Basilio’s aria from Rossini’s The Barber of Seville. Well, the fireplace “helped” him to keep warm – however, it was animated: the scene imitated the interior of the office with a clock and a portrait of the composer.

Hearing the “mandatory” for all concerts of the popular classic Carmen Bizet in the passionate performance of the red-haired beauty Vasilisa Berzhanskaya and the strict and impeccable Alexei Markov – “Figaro”, the audience welcomed Veronika Dzhioeva – for starters, in the part of Leonora from Verdi’s “Force of Destiny”.

In her other exit, the singer “tried on” a more modern work – the song “Son of the Moon” by Jose Maria Cano. Before the concert, the artist admitted that she was worried when she performed this work at a concert for the first time (and even in an unusual arrangement with a choir).

“This is the greatest song that opera singers sing – in particular, it was performed by the great Caballe,” shared Dzhioeva. “It must be sung in a voice that is not quite operatic, between the stage and the opera.”

“Every year we take a step towards modernity, and this year is no exception: there is a lot of music of the 20th century in the concert,” director and producer Yekaterina Galanova warned before the start of the concert.

Indeed, this time the program of the concert approached our time closer than usual. With a gentle “Roman guitar” by composer Eldo Di Lazzaro, the Italian Vittorio Grigolo, under the light of old St. Petersburg lanterns on the screens, “guided” the audience to the melodies of Vincent Youmans (Tea for two), Nino Rota (Parla piu piano) and the unforgettable Sinatra My way from Ildar Abdrazakov. So, along the roads of classics and modernity, the audience got to the sacramental Show must go on – the very one that Freddie Mercury sang.

And she got it all of a sudden: the Queen’s hit “broke through” fire through Cavaradossi’s aria from the opera Tosca, and opera soloist Vittorio Grigolo transformed into a rock star in a second.

The show must go on – and “Classics on Dvortsovaya” has been decorating the City Day in St. Petersburg for 10 years already – this concert was an anniversary one. It is all the more pleasant that the weather spared him and the listeners, not interfering with the rain from admiring the music and the skill of the artists.

covers of the day