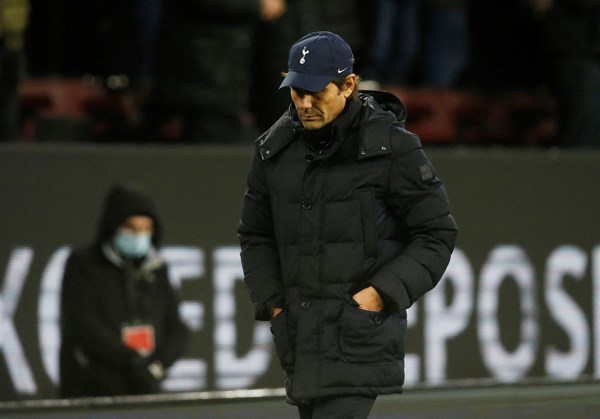 Italian coach Antonio Conte vowed that he would evaluate his future with Tottenham, after the latter’s surprising loss at Burnley Stadium 0-1 in a postponed match of the English Premier League.
After winning at the weekend at the expense of Brighton 3-0, their first victory since October 30, Burnley achieved the surprise in their postponed match from the thirteenth stage and returned their guest Tottenham to the ground by dropping them 1-0 with a goal scored by Ben Mai in the 71st minute.
Tottenham did not benefit from the moral dose they received by defeating champions and leaders Manchester City 3-2 with a goal in the fifth minute of stoppage time through its captain Harry Kane, and Lintics returned with a fourth defeat in the last five games.
Conte’s team is stuck at 39 points in eighth place, seven points behind the last fourth qualifier for the Champions League, which is occupied by Manchester United, with another postponed match in the squad of the London team.
After the defeat at Burnley Stadium, Conte, who took over the supervision of the team in November, succeeding the sacked Portuguese Nuno Espirito Santo, considered that he did not deserve the salary he receives and that he would discuss his future with the club’s board of directors.
“When you lose four matches out of five, it means that the club has to assess the situation and that we have to talk to each other and understand what is the best solution,” the Italian said.
He said: In a situation like this, the players do not change in the team, but the coaches always change, this is the reality, no one deserves to be in a similar situation, if it is the club, me, the players, the fans, but this is the reality.
After winning the league title with his former teams, Juventus and Chelsea, up to Inter last season, Conte now feels that he is coaching a team that is fighting to avoid relegation to the second division, explaining: I am not used to this kind of situation, the reality is that we were fighting “in terms of The feeling” in the last five games in order to avoid relegation, this is the truth.”
He said, “I have to take my responsibilities, and I am open to any decision because I want to help Tottenham. It is not good for anyone that we continue to lose, and I cannot accept that, since the first day I came here, I wanted to help, I repeat that I am honest enough, In order not to ignore what is happening, to continue working in this way, and to continue receiving my salary, it is not permissible at this moment.”

Aziz Othman, who fell in love with Laila Fawzy to death.. on the anniversary of his departure

Strengthens the strength of the teeth and maintains the gums.. Learn about the benefits of vitamin D that contribute to oral hygiene