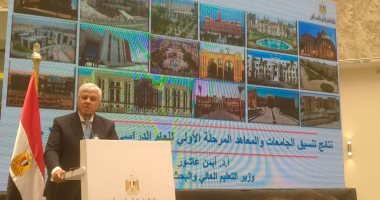 At the beginning of the meeting, the members of the two councils extended their sincere congratulations to Dr. Ayman Ashour for the confidence of the political leadership for his assumption of the position of Minister of Higher Education and Scientific Research, wishing them continued success.

The members of the two councils also thanked Dr. Khaled Abdel Ghaffar for his distinguished efforts in upgrading the higher education and scientific research system during the last period, congratulating him on the occasion of his assumption of the duties of the Ministry of Health and Population.

Dr. Adel Abdel Ghaffar, media advisor and official spokesperson for the ministry, said that the Minister of Higher Education indicated in the meeting that private and private universities represent an important tributary of the higher education system in Egypt in recent years, which has worked to reduce pressure on public universities, noting that their presence is a necessity. To accommodate the increase in demand in Egyptian university education, praising the progress these universities have achieved in international rankings.

The official spokesman for the ministry added that the Minister of Higher Education confirmed during the meeting that the ministry’s future plan will witness the continuation of the implementation of all files to develop the higher education system and scientific research, in order to achieve the state’s plan to achieve sustainable development (Egypt Vision 2030).

The official spokesman explained that the minister constantly directed universities to participate in the community, through medical, veterinary, and agricultural convoys, educational seminars, and various events and activities.

The Minister also directed the importance of continuing the efforts of universities in preparation for the new academic year 2022/2023, and the speedy completion of all maintenance operations for buildings, auditoriums, classrooms, and laboratories, as well as university cities, and to emphasize safety and security standards in all university facilities.

The official spokesman of the ministry announced that the two councils agreed to determine the minimum admission that allows the student to apply for admission to all specializations in the faculties of private and private universities as follows:


Coordination of private and private universities

refugees from Ukraine ruin the British

towards the restoration of energy in the Sango district of Bangui