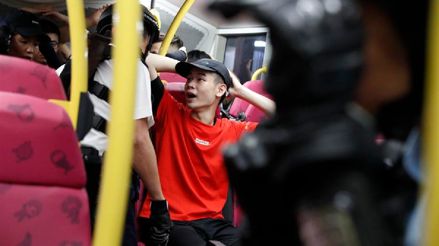 The schools of Hong Kong will close from next Wednesday until after Christmas to try to stop the fourth wave of COVID-19 in the city, once in the last 24 hours they were counted 115 new cases, the highest number since August 1, the local Executive reported today.

Of the 115 new infections, Hong Kong’s first three-digit number since the beginning of August, 62 are related to the group of “supercontagators” who frequent dance clubs. that triggered the fourth wave of the virus in the former British colony.

The total of cases of this wave rises to 479, another 23 of them with known links, 24 without being able to be traced and six from abroad. More than 50 people have also tested positive in the preliminary tests carried out.

The head of the infectious diseases department of the Hong Kong Center for Health Protection, Chuang Shuk-kwan, affirmed that, according to the trend and the numbers they have observed, it seems that this fourth wave “it is more serious than the previous one“.

“Of course, it depends on the evolution in the next few days. So far we have tightened the measures of social distance and increased the general level of awareness of citizens, in addition to increasing the tests, “said Shuk-kwan.

Those responsible for education in the city indicated that The return to more than one hundred cases a day has led the teachers’ associations to request the cessation of face-to-face activity in all kindergartens, primary and secondary schools.

Kindergarten classes had already been suspended for two weeks last Monday due to the increase in cases but Today’s decision extends the suspension until next year.

However, the government is preparing to order all staff working in nursing homes and prevented from conducting covid tests.

The Secretary of Employment and Welfare, Law Chi-kwong, He said that all employees who care for the elderly will have to undergo a coronavirus test before Dec. 14.

Once these tests are completed, in approximately two weeks, Chi-kwong said all staff will be ordered to test weekly.

The total of cases registered in Hong Kong since the beginning of the pandemic rises to 6,329, that have caused 108 deaths.

The person in charge of Employment considered the test of the workers important since I point out that 46 percent of those who have died from COVID-19 in developed countries they have done it in nursing homes.

In Hong Kong have died about 30 percent of the 102 elderly infected in nursing homes.

Exclusive places in the city such as Hong Kong Country Club closed today its doors after detecting a case among its associates and after cases have begun to be detected in facilities frequented by the wealthiest people.

The Hong Kong government decided last Tuesday to close nightlife establishments and imposing the use of mobile tracking apps in restaurants in an attempt to stem this fourth wave.

What is pandemic fatigue and how to avoid it? – Vital space

Pandemic fatigue is a feeling of apathy, lack of motivation and mental exhaustion that a person experiences. This type of fatigue affects the emotional health of millions of people in the world, not just those who have been infected with coronavirus. Dr. Elmer Huerta gives us recommendations to avoid being affected by this discomfort.