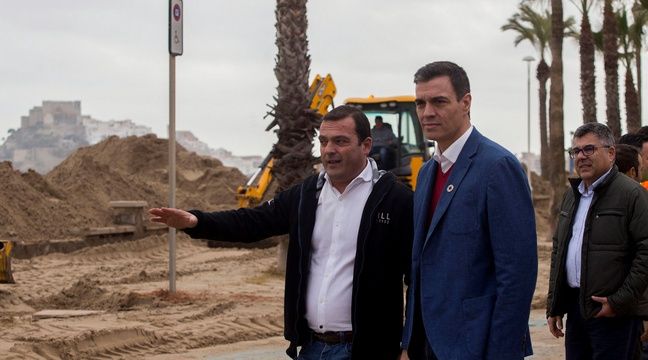 Local authorities confirmed on Monday the death of a thirteenth person in the wake of the Gloria storm that struck last week in the east of
Spain, three others missing.

“The family confirmed (Monday) the identity of a 41-year-old Colombian who disappeared on Tuesday and whose body was found on Saturday” off the island of Ibiza, the AFP prefecture told AFP. Balearic archipelago. The previous toll from the heavy rains and strong winds caused by the Gloria storm was twelve dead and four missing, according to the head of the Spanish government Pedro Sanchez.

Last week, “the sea advanced three kilometers inland in the Ebro Delta”, a protected natural park in Catalonia, said Pedro Sanchez. “In some places more rain fell in one day than you would expect for the whole year.”

Seventh storm of the season

The city hall of Barcelona has assessed the damage at “12.5 million euros” in the second city of Spain. For the region of Valencia (south-east) alone, the young farmers’ union Asaja estimated the losses in the agricultural sector at “62.6 million euros”.

“This is the seventh major storm that we have known since the start of the storm season” in November and they are “more and more devastating”, recalled Pedro Sanchez to stress that Spain is particularly exposed to climate change.