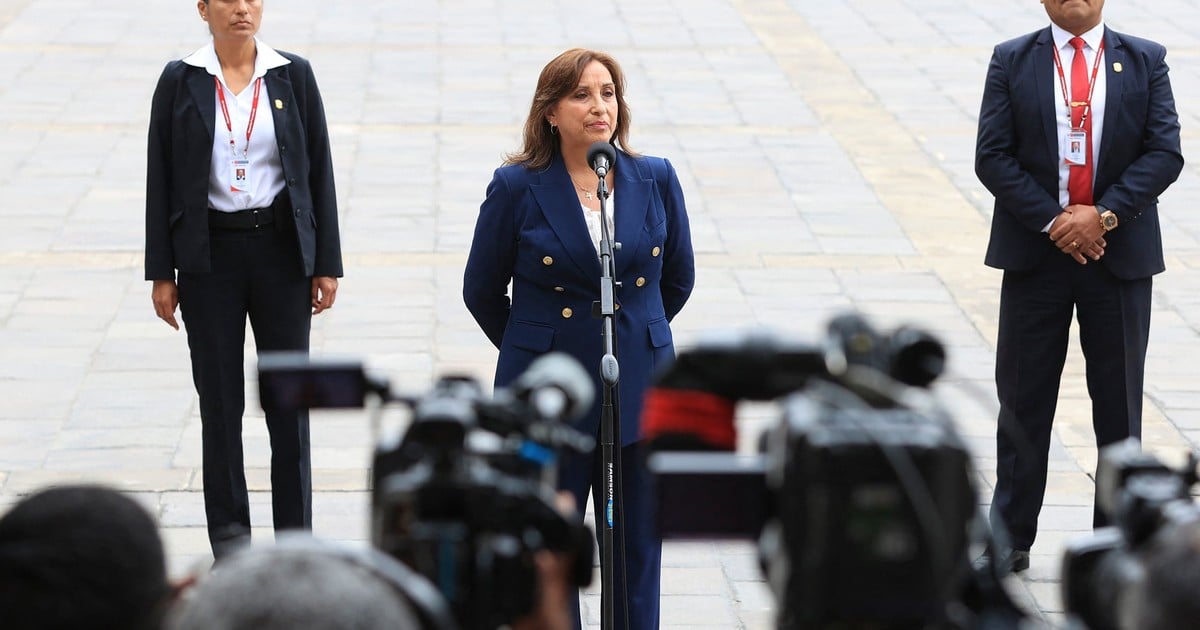 Dina Boluarte, the new president of Peru consecrated after the impeachment and arrest of former president Pedro Castillo for his attempted coup on Wednesday against Congress, he proposed a truce to the Legislature, another to the press, but a pause also seems to have been imposed on his ambition to conclude the term he has just assumed in 2026.

This review, agreed in the last hours, is suggested as a strategic step of moderate realism in view of the essential negotiations with the opposition to guarantee the architecture of his cabinet. in that game, the opening of a call to the polls helps coincidences.

Just hours after affirming after his oath before Parliament that he would complete the constitutional mandate that ends in three and a half years, this Thursday Boluarte, a center-left lawyer, opened an impromptu press conference the door to a possible call for elections laterbut not on that distant date, which was clearly interpreted as a nod to the opposition.

“I know that there are some voices that indicate early elections and that is democratically respectable. I think that the assumption of the presidency on this occasion is to reorient what needs to be done with the country, ”he said. And he then marked the differences with an important nuance: “Later, in coordination with all the organizations, we will be looking at alternatives to better reorient the destinations of the country.”

With his right hand on the Bible, Boluarte had ceased to be Castillo’s deputy, also involved in serious allegations of corruptionand assumed as the first female president in the history of Peru.

And she did it with a clear message: “I swear by God, the Homeland and all Peruvians to faithfully respect the position of President of the Republic that I assume in accordance with the Political Constitution of Peru, from now until July 26, 2026.” he had proclaimed.

This Thursday he did not make other comments beyond the novelty of the realism game. “Just like yesterday in Congress I asked for a truce so that we can order all of us, I am also going to thank the press for giving me a truce to be able to order and suddenly being able to give them some first-hand news,” said Boluarte.

The electoral reference responds to the fact that some sectors of Peruvian society insist on a call for general elections to renew the executive power but also the legislature, whose image, according to polls, is even more negative than that of Castillo, who had 70 percent disapproval.

This demand was repeated at these hours in the Andean regions of Ayacucho, Puno and Huancavelica, as seen in the reports on local television stations. The demonstrations began on Wednesday night, when some groups sympathetic to Castillo demanded the “shutdown of Congress, rat’s nest”.

But it is not just minority adherents of the fallen president who are calling for a total renewal of authorities. that claim scale in different tones the political pyramid.

This Thursday, while the main focus continued to be on the arrest of the former president trained in the rural north of the country and who will be in preventive detention for a week (his arrest would later be extended to 32 months, said justice sources while the process is being prepared ), other analyzes suggested that sand considered inconvenient that the president has maintained her intention to remain in power until 2026.

For many analysts, the harsh opposition in Parliament that harassed Castillo, however, may calm down for a period of time whose extension is yet another question mark in this Peruvian present.

An interesting fact in this sense is that the right-wing leader Keiko Fujimori, daughter of the former dictator Alberto Fujimori, and one of the tough rivals of the president with whom he competed for the presidency, stated about the new ruler that “Let’s hope the president appoints a broad-based cabineta very good cabinet and we all have to make things possible so that things work well”.

Without its own bench, Boluarte is in a fragile situation in political terms, similar to the one experienced by former president Martín Vizcarra, who it also ended up being shot down.

“She is alone… She does not have the tools to govern, she must call an early election, she may be resigning so that the head of Congress can take office and carry out the elections,” said former president Ollanta Humala to the local press. Humala is another of the leaders who they ended up in jail by allegations of corruption, almost a common sense of local politics. And it reflects the opinion of an interested sector.

Until a week and a half ago, Boluarte was Castillo’s Minister of Development and Social Inclusion and resigned, distancing herself from the government. In January she had been expelled from the fundamentalist left party, Free Peru, that brought Castillo to power and is led by Vladimir Cerrón, a communist veteran, with medievalist ideas and also with a handful of complaints against him.

More of the center than of the left, the president broke with that force in repudiation of the proposals for a general nationalization of the economy or intervention against the independent press. On Wednesday she was one of the first officials to denounce the decision of the ousted president to close Parliament and establish an emergency government as a coup.

This week he received a wink from a sector of the Legislative. With 13 votes and 8 against, the subcommittee on Constitutional Accusations filed a complaint that he sought to remove her as vice president.

The accusation, which could be considered minor, indicated that Boluarte signed documents as president of the Apurímac Departmental Club when she was already part of the government, something that is incompatible. Boluarte had the votes of the left, in what some suppose could be an agreement for the future in view of the session in which the Parliament he was looking to suspend Castillo.

At the time of political tension, Lima lives the long weekend -with Friday bridge- with a habitual life of walks and outings, commercial activity and tourists who did not see their routine altered, in what seems like a society accustomed to crisis policies that do not necessarily impact the economy.

From the publication of the names of her collaborators, it will be known if the president achieved a fruitful negotiation with the opposition to govern Peru, she will continue in the political instability that the striking number of six presidents in six years has already left her to govern the most of 33 million Peruvians.

Boluarte’s first statements from the Government Palace of Peru

At an impromptu press conference, the new president of Peru, In Boluarteasked the press for “a truce”, answered a few questions in which he referred to a possible call for elections and mentioned the president of Mexico, Andres Manuel Lopez Obrador (AMLO), who acknowledged that he spoke with the detained former president Pedro Castillo for political asylum.

Before remarking that he was going to answer three questions, some from the international press, he added: “The circumstances in which this high responsibility has been assumed have not been the most optimals and that is why the emergency in which I have to be dispatching and attending to meet the needs of the country”.

Dina Boluarte and her first contact with the press as president of Peru. Photo: Peru Presidency

“The political instability in the country is not from now, it’s from a long time ago. We have six presidents passing by,” Boluarte said later, with his hands in the pockets of his blue jacket.

Dina Boluarte and her first contact with the press as president of Peru. Photo: AP/Fernando Vergara

On the other hand, they asked him about the Pacific Alliance summit, scheduled for December 14, and he mentioned the president of Mexico, but made no reference to the request for political asylum.

“We hope that in any case and as he had offered, President AMLO, who had offered to come to Peru, can fulfill that. Here we are going to wait for him with open arms and with the love of all Peruvians. And if not, we will be doing the delivery of the pro tempore presidency via zoom for Peru,” said Boluarte and withdrew.

President Andrés Manuel López Obrador revealed this Thursday that, before being arrested, the deposed Peruvian president Pedro Castillo phoned his office to request asylumfor which he ordered that the doors of the Mexican embassy in Lima be opened to him

“He spoke here to the office so that they would notify me that he was going to the embassy, ​​but surely his telephone had already been tapped,” said López Obrador during his daily morning conference. The head of state said that he sought out Foreign Minister Marcelo Ebrard and asked him to speak with the Mexican ambassador in Peru to grant him reception at the diplomatic headquarters in accordance with the “asylum tradition” of that country.

However, shortly after a mob of people opposed to Castillo went to the area where the Mexican mission is located to obstruct access in case he were to request asylum.

A psychiatric patient in Laval on the run for a week