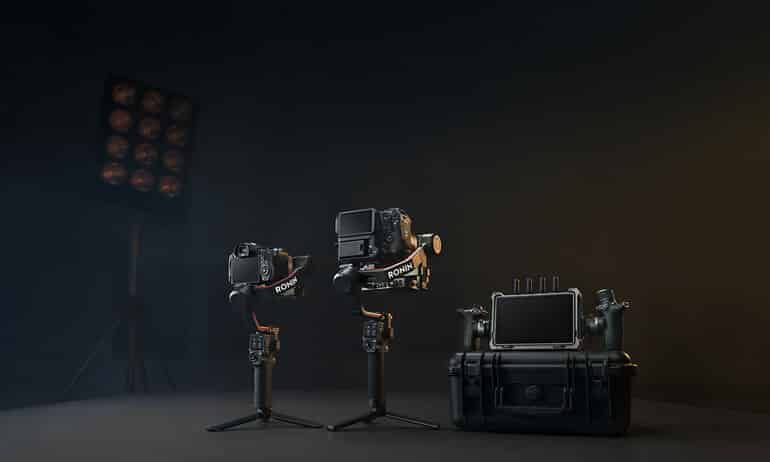 announced Chinese DJI announced the launch of two new stabilizers (gimbals) and a wireless transmission system. The company, mostly known for its drones, is known for expanding its reach in recent years with its products for filmmakers. And last year it introduced its first new cinematic camera, the Ronin 4D.

The RS 3 stabilizer can be considered a successor to the RSC 2 stabilizer released by DJI in 2020. It is the smallest of the newly released stabilizers, and focuses on getting ready to record as quickly as possible.

The new axis locking mechanism operates automatically once the RS 3 is turned on, allowing you to shoot in real time. Combined with the new mounts, it should save you time and eliminate the need to rebalance the arms between shots.

The RS 3 also features new support for the Bluetooth shutter button, which means you don’t need to connect the camera control cable and can just operate the record button wirelessly.

DJI says: The RS 3 offers a 20% improvement in performance over the RSC 2. The improvement is noticeable when shooting at low angles, running with a pivot, or shooting from a moving vehicle.

Like the RSC 2, the RS 3 supports SuperSmooth mode, which adds extra stability when shooting with zoom lenses up to 100mm.

The new installer also features a much larger 1.8-inch OLED touch screen, which should help you adjust settings on the go without having to connect it to the Ronin app.

And the company added a switch to the handle so photographers can switch between follow, pan, tilt and FPV modes.

While the interchangeable battery provides a working life of up to 12, and supports 18W fast charging. The RS 3 weighs 1.3 kg.

The company also announced the RS 3 Pro stabilizer, although the arms of the RS 3 Pro are made from a single uncut piece of carbon fiber. But the RS 3 Pro is slightly heavier than the RS 2, weighing in at 1.5 kg.

Like the RS 3, the RS 3 Pro has all of the above features, including automatic hub locking, Bluetooth shutter control, a 1.8-inch OLED touch screen, and a modes button on the handle.

One difference, however, is that the RS 3 Pro borrows lidar focus technology from Ronin 4D. Combined with an improved focus motor, the lidar rangefinder feature is able to convert manual lenses into autofocus lenses.

The DJI Transmission wireless video solution is the latest product from DJI, and if you’re familiar with the Ronin 4D, it looks similar. It is a transmission technology that allows remote monitoring and control of the camera, RS 3 Pro, or both at the same time.

DJI Transmission enables video transmission from up to 6 km in 1080p resolution at 60 frames per second with live audio monitoring.

The system comes with a transmitter placed on top of the device you want and a receiver in the form of a 7-inch screen. The 1500 nits screen supports one transmitter with multiple receivers and two switching modes.

Broadcast mode allows an unlimited number of receivers to monitor production. While the mode of control, monitoring and remote control of the devices can be carried out using two receivers.

The famous Saudi Snape “Rahaf Al-Qahtani” was taken to the hospital urgently.. You won’t believe what happened to her! (Watch a video)