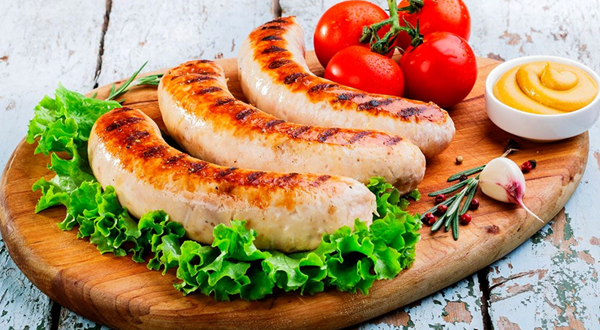 Sausage is one of the types of sausage that originated in Frankfurt, Germany in the thirteenth century, and after that sausage became a popular street food in New York City, and it is a favorite of many, but it contains many damages.

Unsaturated fats are beneficial to the health of the human body, as they reduce the level of harmful cholesterol, while saturated fats may lead to building solid accumulations in the arteries, increasing the level of cholesterol in the blood and increasing the risk of cardiovascular disease. The American Heart Foundation advises eating less than Saturated fat is 7% of your total calories for the day, or about 16 grams per 2,000 calories.

One piece of sausage contains 7 grams of saturated fat, or approximately 44%, a diet high in cholesterol raises the level of total cholesterol in the blood, which increases the risk of developing cardiovascular disease, and the American Heart Foundation has advised eating less than 300 milligrams of Cholesterol every day, and a person may need to eat less than that if he has a history of heart disease, obesity or diabetes, as one sausage contains 50 milligrams of cholesterol, or approximately 17%, which is one of the damages of sausage.

The Russian doctor and journalist, Alexander Myasnikov, spoke to the “Russia-1” TV channel about the mortal danger to humans posed by sausage as a common product for Russians.

The doctor explained that the sodium nitrite in sausage increases the risk of cancer.

The World Health Organization has included sausages on the list of carcinogens due to the presence of trans fats, sugars and other harmful substances in them.

Moreover, according to Myasnikov, there are some types of industrial meat that receive a certain dose of antibiotics and hormones even at the stage of development.

The doctor also warned that sausage can cause health problems for men. He recommended abandoning sausages and replacing them with baked meats, farm products or aged cheese as well as not eating white bread and replacing it with a product made from whole grains.

The doctor said: “I have been calling for a long time to ban advertising of all kinds of sausages, as well as advertising for tobacco products. Sausage cannot be compared to tobacco, because sausages kill more people.”