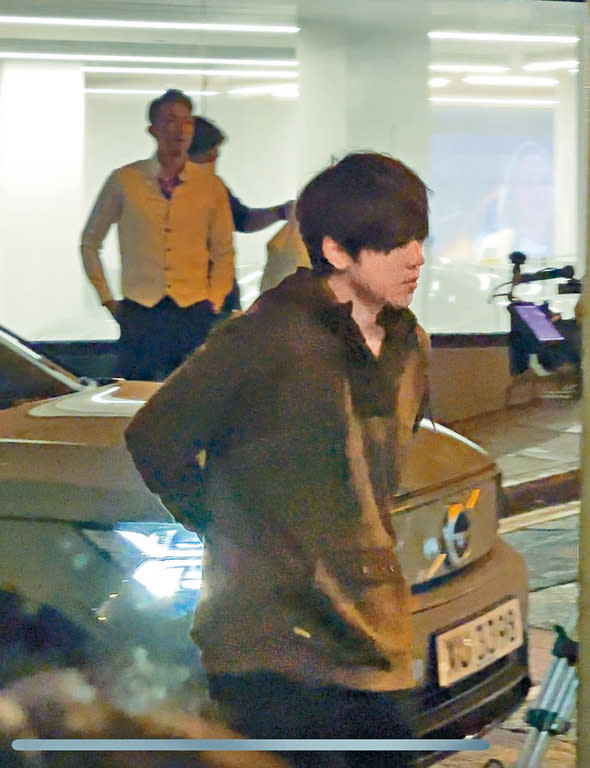 [Sing Tao Daily report]The drama “Pre-season” starring Jiang Tao, Lu Jue’an, Qiu Shijin, etc. has been suspended for a month due to the epidemic. The first day of work resumed on the 25th, and the actors in the play gathered in Wan Chai. During the filming of the location, the wet weather recently caused the road to slip. Jiang Tao accidentally stumbled while filming a scene of running and getting into the car. The staff was nervous and wanted to step forward to help him. He was dedicated and continued to shoot without changing his face.Text and pictures: Entertainment Group

In response to the severe epidemic in Hong Kong, the drama “Pre-season” starring MIRROR members Jiang Tao, Lu Juan (Edan), Qiu Shijin (Stanley), and ERROR members Liang Ye (Fat Boy) and Guo Jiajun (193) was released in February. At the end of the filming, most of the basketball court scenes had been completed, and then the crew announced that filming would be suspended for another three weeks.

The busy city chases the progress and attracts onlookers

The night before (25th) officially resumed work and started filming on location. At 5 o’clock in the evening, the crew had already prepared at the shooting site in Wan Chai. About an hour later, the actors arrived one after another. Among them, 193 even drove his car to the scene. The crew prepared a red small car at the scene. Ba filmed and rented the restaurant next to it as a restroom and dressing room. When the actors arrived, they entered the restaurant to prepare. Before the official shooting, the staff lit incense candles and distributed them to the actors to worship God and pray for a smooth shooting. Shooting in the downtown area of ​​Wan Chai that day naturally attracted many passers-by.

In order to recover the progress of the shooting, the crew seized the time and shot many different scenes in one go. First, Zhang Jicong, 193, Fat Boy and Jiang Tao took the lead. Among the four, Zhang Jicong was the most solemn and prominent, wearing a white suit, while the other three wore simple casual clothes. The minibus was overwhelmed and discussed with the three sons in the car. This scene took more than 5 shots to complete. The four of them were talking and laughing. Among them, the fat boy was in a good mood and danced with Jiang Tao from time to time, “Fat Jiang” The two masters and apprentices swing their bodies from time to time, which is very funny!

The pace is normal

After filming another scene and taking over the plot, the four people who couldn’t drive the minibus were unable to drive. Stanley and Edan drove their private car to pick them up. Stanley and Edan shouted on the street, “Will you get in the car?” Four The man immediately ran down the inclined road, but due to the rain and the slippery road, Jiang Tao stumbled accidentally. The staff next to him were nervous and wanted to step forward to help him, but because the director did not call the stop, Jiang Tao continued the performance without changing his face. , got up and rushed into the carriage, and finished the scene after shooting five times before and after.

Later, when the director called “Cut”, Jiang Tao put his hands on his waist when he got out of the car, but the pace was normal, and I believe there was no serious problem. After that, the actors went back to the restaurant to rest. During the period, the manager, Sister Hua, came to visit the class.

■In this scene, Jiang Tao and his party ran to the side of the private car to get into the car.

■Due to the rain and the slippery road, Jiang Tao accidentally stumbled.

■Jiang Tao got up immediately after stumbled, and the director did not call to stop when he saw this.

■Then Jiang Tao opened the door and got in the car, all in one go.

■Stanley and Edan drove to pick up the four.

■Edan was photographed in a sports attire.

■Although Jiang Tao got up and held down his waist, his face did not change, his steps were normal, and he continued to shoot. He was very dedicated.

■Zhang Jicong, 193, Jiang Tao and Fat Boy buried their positions, and they talked and laughed during the period.