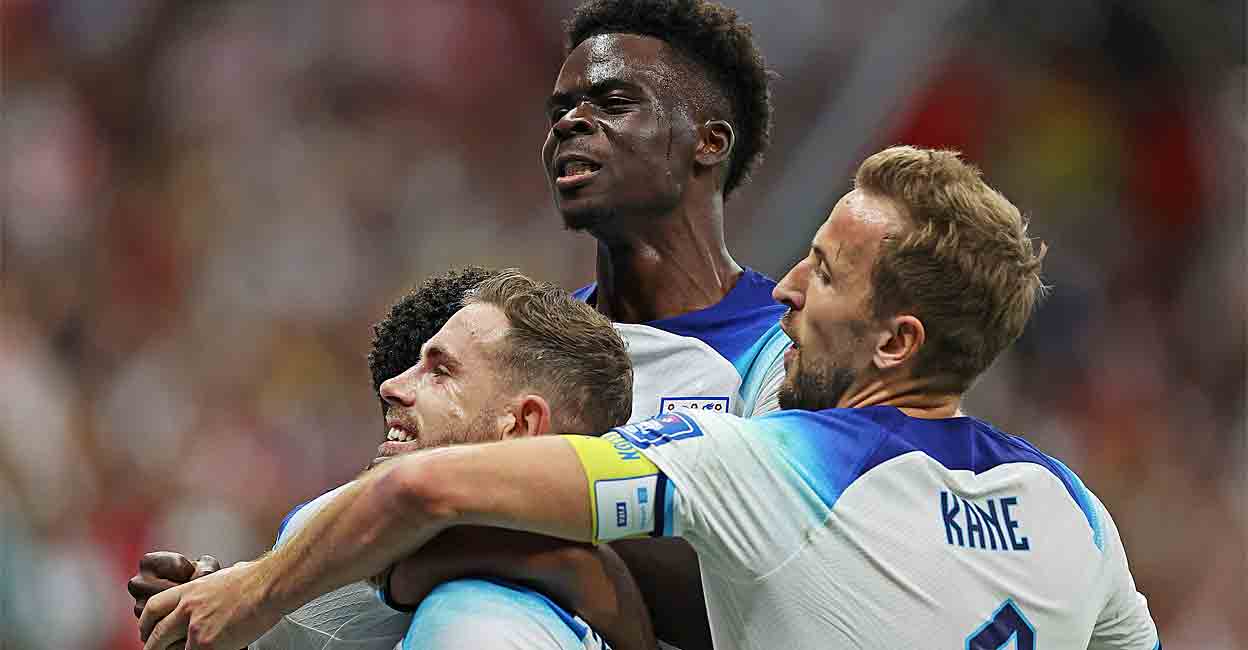 Doha ∙ England fought without giving up their presence of mind in front of the power game of the Senegalese players and reached the quarter-finals of the Qatar World Cup with a resounding victory. England won by three one-sided goals in a thrilling match at Al Bait Stadium. Jordan Henderson (39th minute), captain Harry Kane (45+3) and Bukayo Saka (57th minute) scored for England.

Now, England’s opponents are France, the current champions, in the quarter-finals to be held at the same stadium on December 10. France entered the quarter after defeating Poland by three goals to one. Kylian Mbappe’s double goals gave France a stunning victory.

In a match where Senegalese players fought hard at the Al Beit Stadium, England were saved by a mistake in front of goal. England scored all three goals after the advances made by focusing on counter-attacks.

∙ The way the goals came

England first goal: England’s first goal was paved by the young player Jude Bellingham’s progress through the left wing with the ball received from Harry Kane. Bellingham, who rushed to the box after chasing the Senegalese players one by one, hit the ball straight into the middle of the box. A running Jordan Henderson guided the ball into the net with his left foot. Goalkeeper Edward Mendy dived in the direction of the ball but to no avail. Goal…. Score 1–0.

England second goal: Captain Harry Kane scored the second goal for England after being the top scorer in the last World Cup despite not being able to score any goals this time. Once again England’s goal was from a quick counter attack. Jude Bellingham took the ball from his own half and started the progress this time. Bellingham advanced with the ball down the middle of the field and flipped it to Phil Foden on the left wing. Foden quickly passed the ball to captain Kane who was unmarked. Kane’s shot, which had enough time in front of the post, went past Eduard Mendy and into the net. Score 2–0.

England third goal: England’s third goal was scored by Phil Foden on the left wing when Captain Harry Kane lost control of the ball during his rush towards the Senegal box. Foden pounced on the ball and flicked it across the face of the goal outside the box. Goalkeeper Edouard Mendy was left with nothing to do as Bukayo Saka headed the ball parallel to the post into the net. Bukayo Saka’s third goal in the Qatar World Cup. Score 3–0.

Thirty-two-year-old Henderson is the oldest player to score a World Cup goal for England since Tom Finney, who scored against the USSR at the age of thirty-six in the 1958 World Cup. Jude Bellingham, who was instrumental in both of England’s goals, became the youngest player since Michael Owen to play in the first XI for England in a World Cup knockout.

The first half saw the Senegalese squander two golden chances. Senegal should have taken the lead by shocking England in the 31st minute. The savior was goalkeeper Jordan Pickford. As Ismaila Zar made a diving catch with the ball from Bukayo Saka, he turned it over to Boulaye Diya. The Senegalese fans watched in disbelief as Thia’s blistering shot from the left wing bounced off Pickford’s left hand in front of the post.

Before this, in the 23rd minute, during the crowd in the England box, Ismaila Sir’s shot flew over the cross bar with only the goalkeeper standing in front, which disappointed the fans.

England face Senegal with only one change to the team that beat Wales in their last group game. Bukayo Saka replaced Marcus Rashford, who scored against Wales, in the starting eleven. Saka scored a double in the first match against Iran.

Ragheb Alama sends a message to his brother on his birthday

Do not ignore it and go to the doctor immediately. Symptoms that appear when entering the bathroom indicate cancer