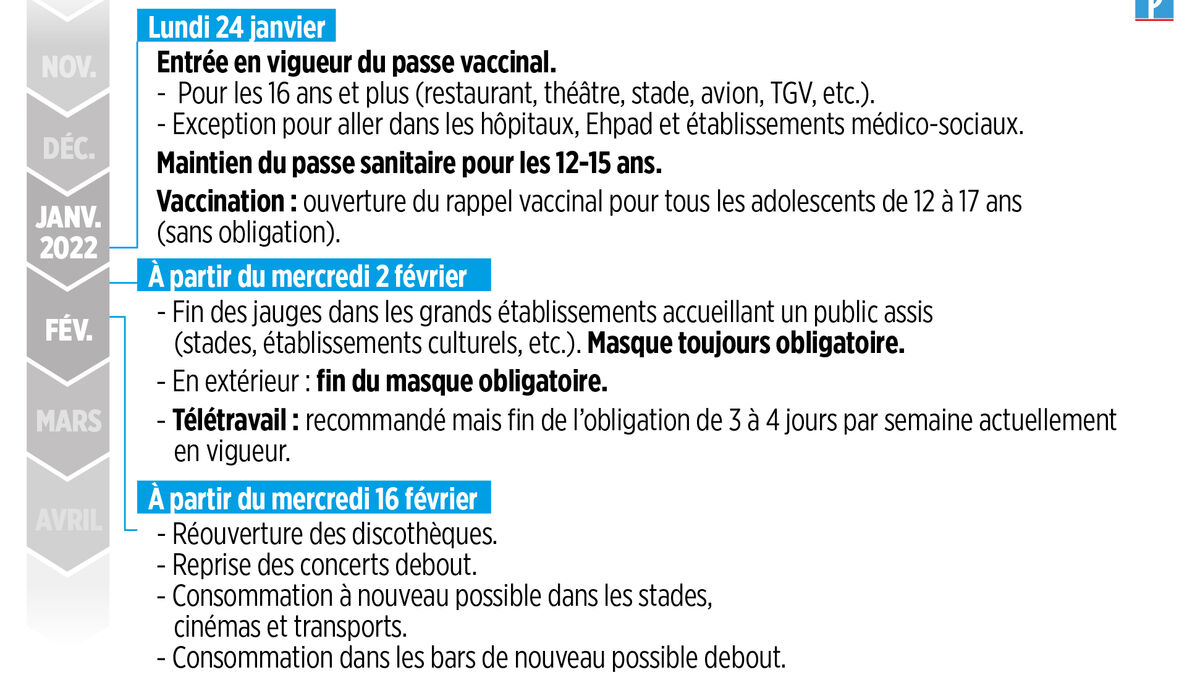 We were expecting Gabriel Attal, the government spokesperson, to announce the timetable for the lifting of restrictions this Thursday after the Health Defense Council. It was finally Jean Castex and his Minister of Health, Olivier Véran, who detailed in the evening the future relief that the French are impatiently awaiting, weighed down by two years of health crisis.

The gradual lifting of restrictions, following a “situation [qui] begins to evolve favorably”, according to the Prime Minister, will be done in two stages, within two weeks, in order to allow the deployment of the vaccine pass (January 24, as a reminder) and further consolidate the hospital situation in the face of the Omicron wave.

From the Wednesday February 2, it will be the end of gauges in large establishments open to the public (ERP) with a seated public, such as stadiums and cultural establishments. Wearing a mask will nevertheless remain compulsory. No more, on the other hand, the wearing of the compulsory mask outdoors. As for telework, it will still be recommended, but the 3 to 4 day obligation currently in force will no longer apply.

Since the Wednesday February 16, nightclubs will be able to reopen. This date will also mark the resumption of standing concerts, the possibility of consuming standing in bars and restaurants, but also of drinking and eating in transport, cinemas and stadiums.

The health protocol at school soon to be lightened?

What about the health protocol at school? It will probably be lightened to back to school in February, in particular concerning the wearing of a mask in elementary school or on “the question of the number of tests or self-tests to be carried out”, added Jean Castex. However, no specific date has been set at this stage.

The executive, faced with the wave of the Omicron variant, had announced numerous restrictions at the end of December. Beyond a hardening on teleworking – compulsory at least three days a week, four when possible – Jean Castex had announced the limitation of large gatherings to 2,000 people indoors and 5,000 people outdoors, as well as a ban on standing concerts and standing drinking in bars and cafes. The obligation to wear a mask outside had been extended to city centers.

The unvaccinated are 50 times more likely to die