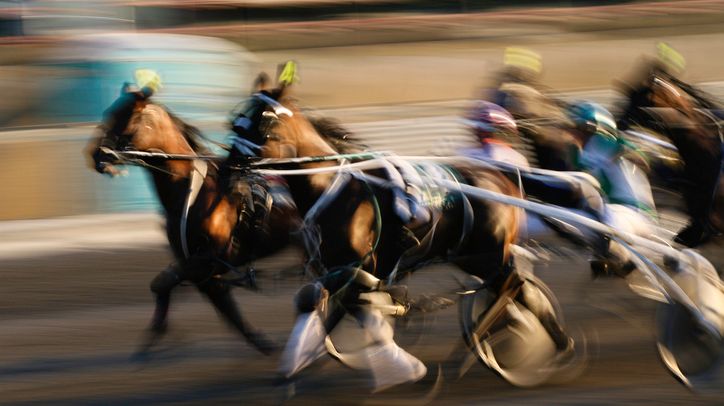 Direction Vincennes this Sunday, December 4, 2022 for the Tiercé-Quarté-Quinté +. In this event, the Final of the Grand National du Trot will have to compete against each other as starters. The race will be contested over 2850 meters, and endowed with 150,000€.

In this event, Fragonard Délo (1) remained on top and is as comfortable in Vincennes as in the provinces. You just have to hide the effort from him. Admittedly, this Final is very well composed, but it is not out of the question for the small places, after a good race, according to Franck Leblanc .

Christian Bigeon: Gull of Haufor (2) was not good in the stage of Mauquenchy. I think he thought he was in training mode, since he wasn’t barefoot. His previous outing in Nantes was very good. He shows excellent physical condition in training. It is never as efficient as “D4” at Vincennes. Several horses have a good chance in this quinté, he is one of them. You have to redeem it.

Jean-Michel Bazire: Gently de Muze (3) hung on recently, otherwise he would have played a leading role. Physically, he is very well. He prepared assiduously and in good conditions for this long-standing objective. He has my trust.

Sylvain Roger: Edy du Pommereux (4) has made very good value lately, in a very good time, and in a very strong field. The opposition will still be tough on this occasion. If he finished at the end of the combination of the fifth, with the help of a good trip, he would have run very well.

Mathieu Mottier: Fakir de Mahey (5) has had a remarkable season in every respect. He had taken a little break after the summer. He quickly returned to his best as evidenced by his success, when he returned, three weeks ago. I found the Mauquenchy stage placed a little too close to the Final. He will present himself to the best. I think Gently de Muze will be difficult to beat, but my partner has a good part to play.

Hughes Levesque: Gamay de l’Iton (6) ran really well last time, on a track he enjoyed. It’s great but I think this lot is obviously a lot stronger than Mauquenchy’s and the track profile is maybe a little less advantageous. That said, he may still be the best horse in the race. We will not have to throw ourselves into battle from the start, but save strength for the end.

Loic Chaudet: Déesse Noire (7) was very well placed when there was a little stir in the peloton last time. She was hit by another competitor and made the mistake. I appeal to her straight away, because she didn’t race. I think there will be train, which would not serve it, quite the contrary. We are racing for a fourth or fifth place, with the help of a good course.

Franck Harel: Eire d’Hélios (8) was certainly not ready enough last time. We left her in irons last in Mauquenchy to give her a course, with a view to this Final, where she is well placed at the near post. She looks more toned. It needs a good course to express itself. If this is the case, it is able to finish on arrival.

Alexis Garandeau: Farah des Caux (9) has totally reassured us recently. She had tenderness in one foot. She will again be tackled in front and “DP”. She had won the first stage of the GNT, but the opposition in this Final is very tough. That said, a sustained pace can allow it to grab a small place.

Matthew Abrivard: Fine Colline (10) did not miss his first goal of the meeting lately. It still performs well in winter. Several races were available to her, I finally opted for this Final. The opposition is raised but it follows all the trains. With several good chances at the far post, she can take advantage of a good car to be brought back and place her point, in order to play the leading roles.

Stephane Meunier: Django du Bocage (11) will run in improvement on his performance of Mauquenchy which was a rhythmic race. He was fine Monday morning at work. The opposition is raised, especially at the first level. Making the distance will not be obvious. We will aim for fifth place.

Jean-Michel Bazire: Fairplay d’Urzy (12) is good at work, but in competition, it went badly recently, especially for his return to Vincennes. Behind, it was very good. You have to make the distance and he will need a clear course. However, it seems to me, beforehand, very competitive for a place in the fifth. He is really good in training.

Eric Gilles Blot: Echo de Chanlecy (13) must make the distance this time, it’s more complicated. So the goal is to try to win the tournament. You need to have a good run. If it goes well, he can finish fourth or fifth.

Matthew Abrivard: Duel du Gers (14) proved that he had returned to the top after experiencing health problems. After two runners-up at Vincennes, he did well in the Mauquenchy stage. The lot is very well composed but it is voluntary. Even if he always seems in difficulty, he doesn’t let go. It should take advantage of its good physical condition to grab a place.

Jean-Michel Bazire: Feydeau Seven (15) seems to me not bad at work. He has to repeat in competition. I’m a bit skeptical beforehand. He needs to reassure me. I unshod him from the four feet for this fine engagement in the second rung. Now I’m a bit in doubt.

Gilles Curens: Gladys des Plaines (16) had missed her comeback but I plead guilty. I didn’t put it on properly. She reassured me recently at Mauquenchy, even if she could only follow behind. It is on the rise and this outing will allow it to gain in condition. It remains shod and does not perform well on the trot. You can dismiss it. It will have to be held back when it comes out under the saddle.

Jean-Loïc Claude Dersoir: Cash du Rib (17) runs very well in Saint-Galmier. He was not very happy but the time is very good. He hasn’t had any interesting races since. Here, it makes fifty meters. It’s mission impossible. This race will do him good before going, perhaps, to race in Cagnes in the Christmas Grand Prix. He is 10 years old, but still remains extra, cheerful, flexible and with envy, but he must be seen again.

World Cup Qatar 2022 | Jorge Barraza: “Latinos look slow compared to the rest. It seems that they communicate by fax and the others by WhatsApp” | RMMD DTCC | WORLD