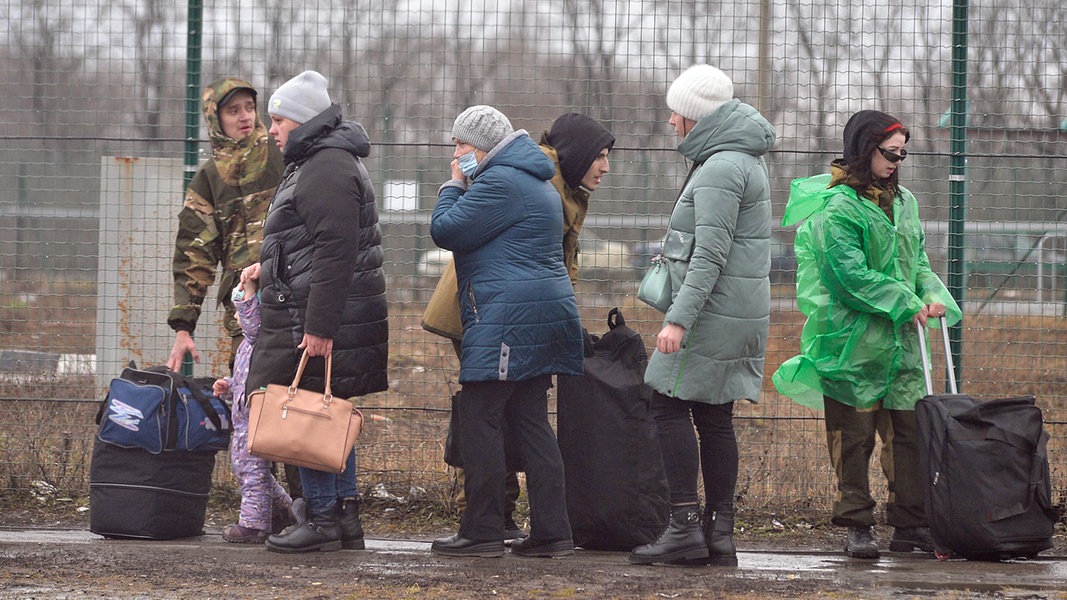 In addition, the state wants to create “rooms for new places”, as Interior Minister Boris Pistorius (SPD) announced in an interview with NDR in Lower Saxony. He called on the municipalities to clarify this. The state reception centers for refugees are currently almost 75 percent occupied. It is not yet possible to estimate how many people from the Ukraine could come to Germany. According to Pistorius, it could be a few hundred thousand, but it could also be one or two million people.

Europe is preparing to take in the Ukrainians. Correspondent Olaf Bock reports on the situation in Poland. 3 mins

According to its own statements, the Lower Saxony City Council has already offered its support to the Minister of the Interior. “It is important that the state of Lower Saxony has already taken effective precautions for central admission and accommodation, even if we cannot yet estimate how many people will come to us,” said President Ulrich Mädge (SPD). “We expect that the federal and state governments will coordinate closely with the municipalities and work hand in hand to tackle the humanitarian task for society as a whole.” When asked by the NDR, several cities and districts – including Wolfsburg, Helmstedt, Wolfenbüttel and Goslar – confirmed that they were also preparing for possible admission, but that there were still no specific inquiries from the state.

People have gathered at the Marktkirche for a vigil against the war in Ukraine. 2 mins

The state capital Hanover, for example, is currently clarifying whether and how other objects can be used as emergency accommodation. Around 4,400 refugees are currently being accommodated in urban accommodation – so there is currently hardly any space, said a spokeswoman. Mayor Belit Onay (Greens) once again assured that the people from Ukraine could rely on Hanover’s solidarity. Osnabrück’s Mayor Katharina Pötter (CDU) also told the NDR in Lower Saxony that aid measures are currently being prepared to accommodate people. “We have 1,400 people in the city with Ukrainian roots. They will have many questions about what they can do once family members have made it here,” said Pötter. First of all, a central contact point will be created. The city will prepare to accommodate many people. “And we love doing that.”

State admissions authority examines the capacities of the locations

The state reception authority in Braunschweig, in particular, is the central point of contact for the arrival of refugees from the Ukraine. At the Braunschweig-Kralenriede location, the options are limited. The camp in Oerbke near Bad Fallingbostel (Heidekreis district), for example, could take in refugees, as authority spokeswoman Hannah Hintze said. All locations are currently preparing for the fact that the numbers could increase in the short term.

Since the people need clothing in addition to accommodation, the German Clothing Foundation in Helmstedt is calling for donations in kind and money. “Women and children in particular will try to get to safety,” said managing director Ulrich Müller. Clothes can be sent by parcel for free. The foundation, which has existed since 2012, collects used and new clothing, shoes and household linen throughout Germany. She maintains close contacts in Ukraine.

Rallies were also held in other places in Lower Saxony. A prayer service was held in Hildesheim Cathedral. more

If you want to donate to the people affected by the war in Ukraine, you will find aid organizations and bank details here. more

The factions were shocked by the Russian aggression. Prime Minister Weil spoke of “imperialism”. (02/25/2022) more

Will the Russian Lada Granta production lines stop in Egypt because of the war?