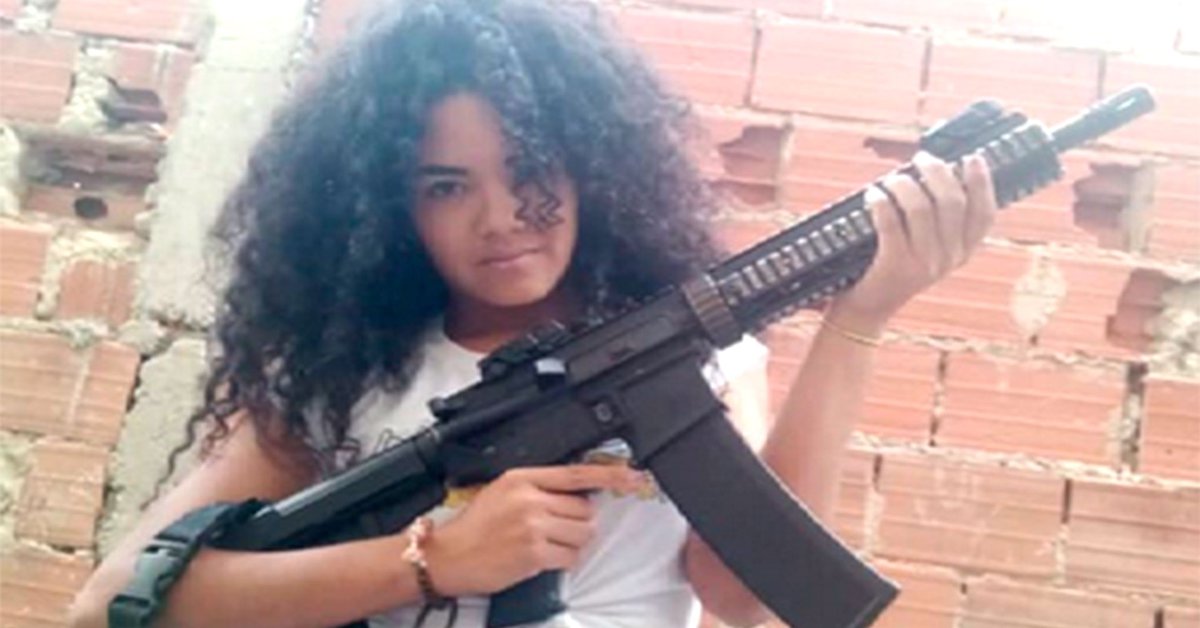 The Venezuelan Scientific, Criminal and Criminal Investigations Corps (CICPC) announced the arrest of Carla Dorianny Díaz Torrealba, alias “La Pelúa”, in Fuerte Tiuna, Coche parish, in the Venezuelan capital. Was accompanied by Oscar Eduardo Duran, who would also be part of the group of Carlos Luis Revete, alias “Koki”.

According to what the local media reported Cactus24, the uniformed men also arrived at Falcón Alley, Santa Cruz Street, House 8 of Las Adjuntas, Libertador municipality, where achieved the apprehension of a third subject identified as Jender Edwin Díaz Rodríguez.

These arrests took place within the framework of the “Operation Great Indian Chief Guaicaipuro”, Ordered by the dictator Nicolás Maduro to disarm the criminal gangs that have a strong presence in Cota 905, La Vega and Petare.

“La Pelúa”, an important member of the “Koki” gang, was captured by the regime forces

Meanwhile, the forces of the Chavista regime continue to search for Carlos Luis “Koki” Revete, for whom they offer a reward of $ 500,000.

Despite having charges against him since 2013, for crimes such as robbery, homicide and drug trafficking, Revete enjoys great impunity. The non-aggression pact it reached with the Venezuelan authorities demonstrates the almost total abdication of the state in slums controlled by mega gangs.

Revete was born in 1978 and grew up in the popular neighborhoods of Caracas. Little is known of his life until 2013, when was accused of the murder of Greiber Danilo Alonso Lucas in the “Los Alpes” sector of Cota 905. It is believed that at that time, Revete belonged to a street gang known as “Los Chiches”, And that he killed Alonso Lucas in response to a photo that appeared on the latter’s social networks, in which he posed with an enemy of the gang.

Cota 905 is one of the most violent sectors of Caracas and in it there are multiple urban gangs. For years, the sector has been subjected to violence and arbitrariness by the police, which has given rise to a deep antipathy of the inhabitants of the sector towards the security organisms. In this context, the gangs gained social power as de facto authorities in the community.

The reward for “El Koki”

Revete gained prominence as the gang leader’s lieutenant, Jesús Alberto Ramos Caldero, alias “El Chavo”, who in 2014 set out to unite the Caracas gangs against the police. This initiative contributed to the emergence of a new criminal structure in Venezuela: the “megabandas”, each of which is made up of more than 50 members, are more organized and better armed than traditional street gangs and mimic the hierarchical structure of Venezuela’s prison gangs. When Ramos was assassinated by the CICPC in January 2015, Revete assumed the leadership of his new mega-gang in Cota 905. Revete continued the Ramos unification project, and some sources attribute to him the union of the Cota 905 gangs: El Cementerio and El Valle.

In January 2015, Cota 905 was included in the Maduro regime’s “Zones of Peace” program., through which the authorities ceded territorial control to criminal organizations, in exchange for them reducing violence. This truce was broken in July of the same year with the start of Operation Liberation of the People (OLP), proposed by Maduro, which consisted of a strong repression that marked the return of police violence and the human rights violations that had occurred in the past. The OLP’s first incursion into Cota 905 left 15 dead, only six of whom had criminal records. Revete was not among them, having taken refuge in a prison a few hours before the raid. He continued to evade capture throughout the operation, fueling the suspicion that the real target of the operation was Revete’s rivals.

In August 2017, the then president (and current vice president) of the National Constituent Assembly, Delcy Rodriguez, visited Cota 905. It is said that the inhabitants of the sector asked the officials to reestablish the Zones of Peace program and prohibit the entry of the police into the neighborhood. However, sources of InSight Crime They revealed that the delegation also met Revete during the visit, and it is believed that they reached a pact with the criminal leader. Thereafter, The Peace Zones program in the sector was reactivated and the security forces withdrew.

A destroyed trench next to a sentry box used as a checkpoint by the El Koki criminal gang, in the Cota 905 neighborhood in Caracas, Venezuela. Photo taken on July 14, 2021. REUTERS / Leonardo Fernández Viloria

The state abandonment to which Cota 905 was subjected turned the sector into a criminal enclave, where the mega-gangs moved with total freedom. Although the “pax mafiosa” between the gangs and the security forces may have reduced violence, it also allowed gangs like Revete’s to accumulate heavy weapons and consolidate their criminal economies. By 2016, Revete’s gang was estimated to have between 70 and 120 members, who used Cota 905 as a base of operations for extortion, kidnapping and vehicle theft. Although including allied gangs, it can count up to 180 men.

Within the Peace Zone of Cota 905, Revete enjoys almost total impunity, which was overwhelmingly demonstrated with a video that has circulated on social media, in which he is seen openly participating in a neighborhood party. Most alarmingly, such a program appears to be allowing mega-gangs to reach ever greater levels of integration and organization. Security reports indicate that, in mid-2019, Revete was working with his fellow gang member, Carlos Alfredo Calderón Martínez, alias “El Vampi”, in the direction of a mega-gang of some 180 members, whose criminal empire extends beyond Caracas. Throughout 2019 there have been new signs that El Koki feels safe from harm. In June 2019, the criminal was present at the pompous funeral, in honor of one of the members of his gang, whose ceremony was presided over by Alex de Castro, a renowned Puerto Rican salsa singer and pastor.

A car crushed by a Special Forces (FAES) tank, after armed clashes between members of the El Koki criminal gang and the police forces, in Caracas, Venezuela. Photo taken on July 12, 2021. REUTERS / Leonardo Fernández Viloria

In July, members of the “El Koki” gang attacked CICPC agents in Cota 905. Soon after, the agents were ordered to leave the area, a situation that has become common when the gang of “The Koki”. Basically, the police are prohibited from entering gang-controlled areas.

At the end of December 2020 and the beginning of January 2021, members of the band that Revete leads took over sectors of the La Vega neighborhood, a popular area of ​​Caracas, which, although it is very close to Cota 905, had not been occupied by the criminal group.

The gang’s action generated that on January 6, police officers of the Maduro regime, mainly from the FAES, They will enter the neighborhood in search of Revete’s allies. The operation lasted until Saturday, January 9, and unofficially left 23 people dead. Human rights defenders denounced the event as the police massacre with the highest number of victims that has taken place in the country.

Although most of the victims were not identified by their relatives, InSight Crime managed to confirm that “El Koki” was not one of those killed.

The “El Koki” gang has had almost weekly clashes until April 2021 with rival gangs and with the security forces in areas surrounding Cota 905. These confrontations, in addition to the presence of several members of the gang in Valles del Tuy, reveal what “El Koki” seems to go ahead with its expansion plans.